An archaeological team in the Bayuda Desert in northern Sudan has discovered dozens of new rock art drawings, some of which were etched more than 5,000 years ago and reveal scenes that scientists can't explain.

The team discovered 15 new rock art sites in an arid valley known as Wadi Abu Dom, some 18 miles (29 kilometers) from the Nile River. It’s an arid valley that flows with water only during rainy periods. Many of the drawings were carved into the rock faces — no paint was used — of small stream beds known as "khors" that flow into the valley. 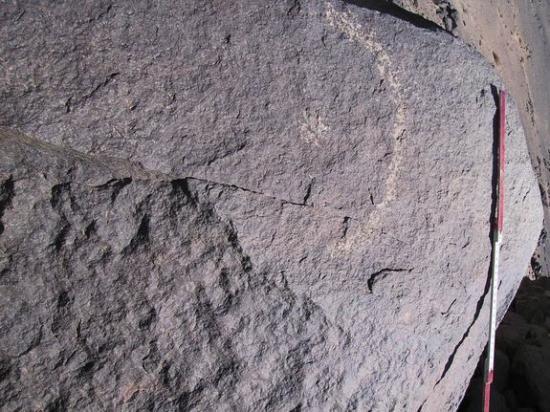 Here a rock etched with patterns forming a crescent moon and orb, an example of another piece of rock art discovered at Wadi Abu Dom in northern Sudan. - CREDIT: Courtesy of Tim Karberg/Westfälische Wilhelms-Universität Münster.

Some of the sites revealed just a single drawing while others have up to 30, said lead researcher Tim Karberg, of the Westfälische Wilhelms-Universität Münster in Germany .

“We asked the local people about the rock art and they said that it would be very old, before their grandfathers,” Karberg told LiveScience. 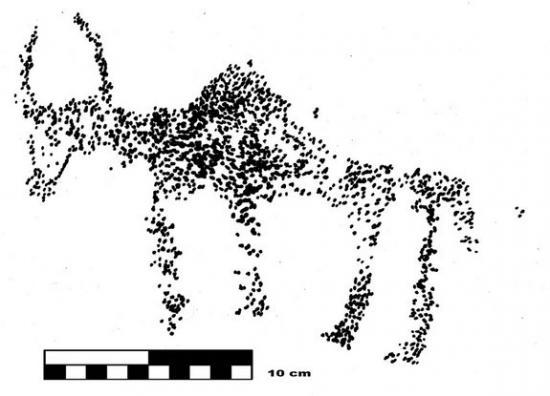 Cattle drawing - Credit: Courtesy of Tim Karberg/Westfälische Wilhelms-Universität Münster.The ancient artists did not use paint to create their "drawings," and instead carved the figures directly into the rock. To get a better view of the art, this cattle etching is shown on a white background.

A number of the images appear to date back around 1,500 years ago, to a period when Christianity was spreading in Sudan. They include depictions of crosses, a church, which may show a nearby, ancient monastery called al-Ghazali, and one remarkable picture of a knight riding an animal with horns. 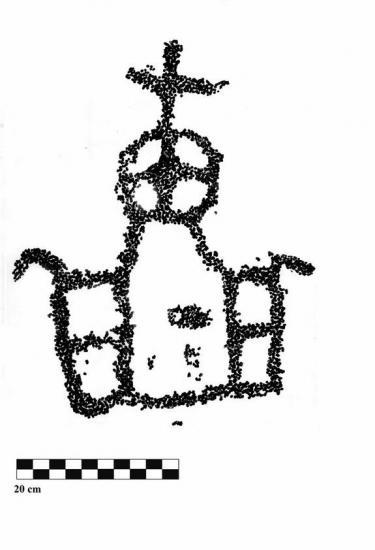 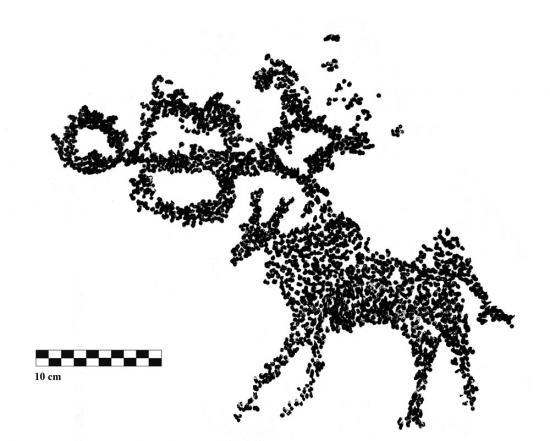 This piece of rock art found in Wadi Abu Dom depicts a knight riding a horned animal. There's a chance the armed rider may be a legendary soldier named St. George who was said to have slain a dragon. - CREDIT: Courtesy of Tim Karberg/Westfälische Wilhelms-Universität Münster.

"One is a depiction of an armed rider, with a lance and a shield, a kind of knight depiction," Karberg said, suggesting this may be an image of St. George, the legendary soldier said to have slain a dragon.

Drawings of St. George are known from Sudan and texts discussing him have been found within the country. “Our texts attest to the popularity of the Saint in Christian Nubia,” wrote historian Gerald Brown, in a study he did on the subject.

The team also found detailed representations of cattle at Wadi Abu Dom that, based on rock drawings found at other sites, are probably from the late Bronze Age.  During this time, more than 3,000 years ago, the northern parts of the country were occupied by the Egyptian empire.

Another, even more mysterious, set of rock art appears to be at least 5,000 years old and shows a mix of geometric designs.

The "oldest rock art we found are the spiral motifs," said Karberg, which, as their name suggests, twist up in a way that is hard to interpret. Similar drawings have been found in the Sahara Desert.

They were created at a time when Africa was a wetter place, with grasslands and savannah dominating Sudan; people were moving to a lifestyle based on animal husbandry and, in some instances, farming.

Understanding what these drawings mean is difficult. Some researchers connect the "spiral motifs to some astronomical or astrological forms," Karberg said, but he thinks it might have more to do with math. "The regularity of the spiral might be one of the earliest mathematical ideas the people developed."

A second set of geometric drawings, probably a bit younger than the spirals, is "hard to describe," Karberg said. They consist of "amorphous patterns which are not circular. ... It looks like an irregular-shaped net," Karberg said.

There is no evidence that people were fishing in this area 5,000 years ago, ruling out fishing nets. One possibility is that these irregular "nets" may actually be animal hides. Similar drawings found in Uganda were identified as showing the hide of a crocodile or some other animal, Karberg said.

Music in the desert?

Finally, what artist wouldn't like to relax with a bit of music? The team also uncovered several "rock gongs," large rocks that someone would have smacked a small rock against to make a sound. When the archaeologists experimented with them they found that some of the gongs could produce multiple tones.

Karberg said that it’s difficult to pin down when they were used; it could have been centuries ago or millennia. They may have been used for signalling rather than for actual music. But one thing is for sure, they would have made a pretty decent sound. "As we tried out the sound of many of those rock gongs you could hear (them) quite a long distance," Karberg said.

The research at Wadi Abu Dom is ongoing and the rock art discovery was first presented last year at the 12th International Nubian Studies Conference. 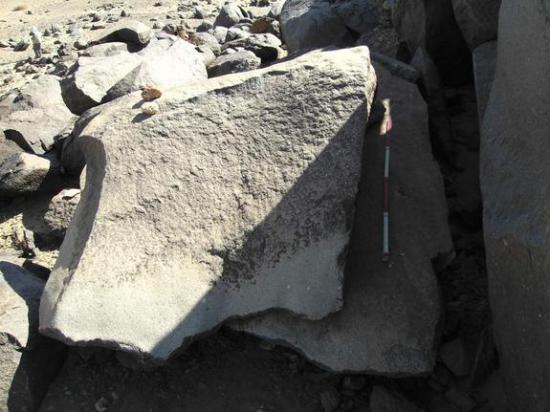 Rock gong - Credit: Courtesy of Tim Karberg/Westfälische Wilhelms-Universität Münster.In the arid Sudan valley, the team also found rock gongs (like the one shown), which were essentially large rocks that would've been smacked with a small rock to make a sound.