Wąbrzeźno (Pologne): New findings of archaeologists on the castle 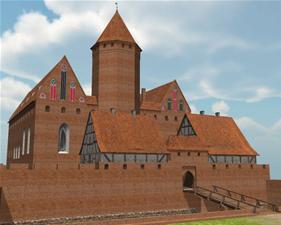 They verified the dimensions of the high castle, they found interesting brick elements of the original features of the fortress and built a three-dimensional reconstruction of the whole complex: archaeologists from the Institute of Archaeology, Nicolaus Copernicus University in Toruń summarized the two-year research project at the castle in Wąbrzeźno (Kujawsko-Pomorskie province).

Archaeologists led by Dr. Marcin Wiewióra conducted excavations at the castle in Wąbrzeźno in 2010 and 2011. Today the ruins of the castle are visible on the surface only in a few places. Most of the surviving relics are deep underground, which was why archaeological research were necessary to learn about the history of the castle.

Construction of the brick castle of Chełmno bishops in Wąbrzeźno started before the year 1311. All the construction work of the fortress was completed perhaps only about half of the fourteenth century. Adjacent to the high castle to the east was a ward surrounded by walls. In 1388, as a result of catastrophic rains that plagued the Chełmno land, two ward towers collapsed. They were probably rebuilt later in the same place. The researchers speculate that the castle was burned for the first time in 1464. After the restoration completed around 1499, it continued to serve bishops, who rebuilt it again in the sixteenth century. After the Swedish wars, in the 2nd quarter of the seventeenth century, the castle gradually fell into disrepair. From 1676 it was unoccupied, and its almost complete demolition took place in the nineteenth century.

"Studies of the castle, despite the modest and limited scope, provided valuable sources to study the construction methods of the 1st quarter of the fourteenth century" - explained Dr. Wiewióra.

Preserved remains of the bishop castle walls in Wąbrzeźno, both those visible on the surface, as well as those discovered during archaeological and architectural studies, are in the area of the high castle. The research conducted to date suggests that the bishops stayed sporadically and temporarily in the castle. Among the permanent residents of the fortress in the Middle Ages were certainly the mayor, the bishop bailiff, at least three priests, their service and lay workers, guards and others - determined the historians who participated in the project.

An important result of the excavations is also the verification of the dimensions of the upper castle. It turned out that the previous estimates were exaggerated. In fact, it was built on a plan similar to a square with dimensions of 36 x 37/38 m.

"The fragments of vault bricks, window jambs, friezes and other architectural details found during the study allow to assume that the information passed in the modern sources about the castle chapel not deviating in quality and design from similar known chapels in Teutonic castles was not just a poetic fantasy" - added Dr. Wiewióra.

Researchers have published their findings in the volume "Chełmno Bishops Castle in Wąbrzeźno. Studies and Materials", recently published with funding from the Ministry of Culture and National Heritage under the priority 'Protection of Archaeological Sites". It contains primarily source-analytical studies, discussing the results of research carried out in both the high castle and in the ward stretching once on the eastern side of the high castle. In addition to the history of the castle and the results of archaeological and architectural studies, authors presented the results of expert analyses of numerous discovered items, including fragments of pottery, metal products, coins. Scientists have also proposed a new reconstruction of the history of architecture of the bishop castle, successive stages of its construction and spatial arrangement.