Vrsysinas (Grèce): Shepherds, farmers and fishermen at the Peak Sanctuary

Animal bones and seashells, because of their texture, are preserved in soil for many thousands of years and are some of the most common finds in any archaeological excavation. Such finds inform us on the ancient physical environment, the economy and the culinary traditions of people in the past. Because the recovered bones and seashells are usually food leftovers, they enable us to explore the social relations and habits that evolve around the table, in the everyday and formal circumstances.

The animal remains and zoomorphic figurines found at the peak sanctuary at Vrysinas open up a window to the Minoan world at around 1700 BC. They enable us to explore various aspects of the human-animal relationships. Besides the economic relations that were involved in animal husbandry, agriculture and fishing in the vicinity of Vrysinas, the role of animals in cult and in the Minoans’ worldview is an important aspect of the interaction between humans and animals. 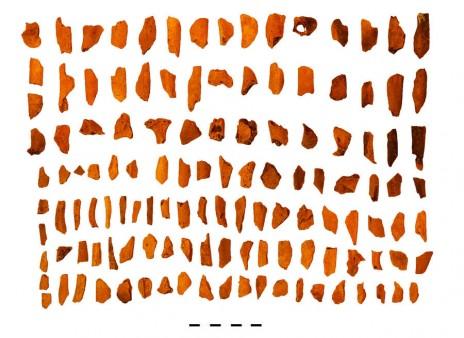 Fig. 1. General view of bones including a group of burned bones.

During the old excavation at Vrysinas in 1973-4 there had been collected several mammal bones, a few fish bones and a single sea shell. Most of the bones are found broken into very small fragments. Some of them bear cut marks produced by knife or another cutting instrument in the process of carcass division, in order to cut it into small portions. 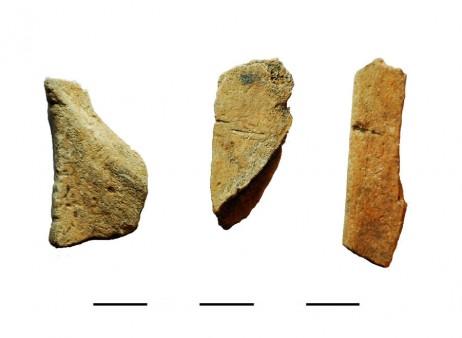 Several of the bones are burned brown or black. The type of burning and its position on the bones suggests that it is not the result of cooking on a live fire.  On the contrary it seems that the bones were burned as a means of garbage disposal after the conclusion of the meal. These observations suggest that on the peak sanctuary at Vrysinas the meat was consumed boiled or cooked in pots, cut up in small individual portions. Georgia Kordatzaki has recorded many large cooking pots, which were apparently linked to these cooking events. The large cooking pots and the small meat portions could suggest that the preparation and sharing of the food involved large groups of people, in a way not unlike the large feasts taking place in the Cretan countryside in our days.

The animal bones belong to goats, sheep, pigs, cattle, dogs, to a large grouper and to a second large unidentified fish. There has been also found a purple shell of the Thaishaemastoma variety. The goats and the sheep, as a group, predominate in the assemblage, although the goats were consumed more often than the sheep. It is interesting that the animal bone assemblage from Vrysinas included several remains of new born ovicaprids, a fact that places the time of their consumption in spring.

The cattle and pigs that were consumed at the peak sanctuary were all mature animals. The dog bones are particularly interesting. One of them bears some disarticulation cut marks, a fact that is probably linked to the eating of dog flesh in this particular area and time. The fish bones and the single sea shell bear witness to the consumption of marine foods.

It is remarkable that the animals that were consumed during the ceremonies and their accompanying meals at the peak sanctuary at Vrysinas are no different from those eaten at the nearby contemporary settlements. Analysis of the animal bones  from the Middle Minoan Chamalevri, on the north foothills of mount Psiloritis, and from contemporary levels at Monastiraki in Amari valley, at the southwest, show that  the same range of species, in similar proportions, were consumed in the ordinary meals of their inhabitants. The only significant difference is probably the frequency in the consumption of beef. This is higher at the settlements in relation to the peak sanctuary.  The low consumption of beef at the sanctuary, in combination to the dominance of bovine figurines among the offerings, raises questions concerning the links between agricultural economy and cult.

We could assume that the worshipers at Vrysinas chose to bring along those foods and offerings that meant something to them and probably reflected their way of life and their interests. Following a reverse reasoning, we could seek those worshipers through their offerings. 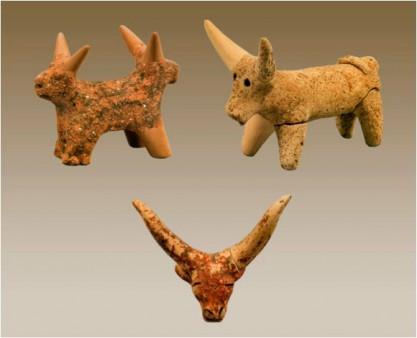 The animal bones, especially those of sheep and goats, clearly reflect the pastoral domain on the uncultivated slopes of Mt. Vrysinas or the more distant mountains. This reflection however comes only from the meal leftovers, as, according to Thomas Tselios, among the thousands of zoomorphic figurines only a handful have the shape of sheep or goats.

We also witness a faint reflection of the agricultural domain through the cattle and pig remains. Cattle and oxen have been used as work animals from very early in history of agriculture and their use as such has revolutionalized farming. Besides, their breeding, especially in an area such as Crete, presupposes the existence of agricultural by-products, such as hay or straw that could be used as fodder. The same is true for pigs, which cohabit with people and are traditionally bred on household or agricultural leftovers. Nevertheless, no pig figurines have been identified from Vrysinas, while almost 99% of the figurines represent bovines. The question here is how much this different expression of the pastoral and agricultural domains in the Peak Sanctuary on Vrysinas actually reflect their relative importance for the people of the region.  If the agricultural production was considered very important at that particular period in time and the bovines as important elements of it, then they might chose to dedicate masses of their figurines instead of slaughtering them in large numbers. 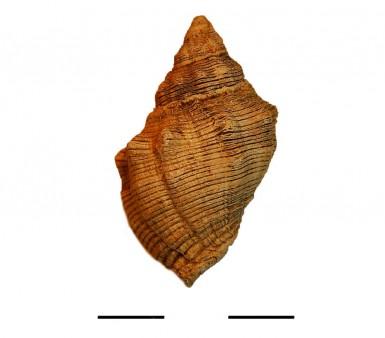 The presence of the coastal domain at Vrysinas is also important. We find fish bones and a single sea shell. The seashell probably links the peak sanctuary to the new art of purple dye production, which is emerging on Crete at this period. The same coastal domain is probably also represented by the unique seal figurine, which according to Iris Tzachili has no parallels anywhere in the Minoan world. The world of the sea was apparently present in other peak sanctuaries as well, such as Traostaos, Kophinas and Agios Georgios at Kythera, in the form of sea shells, boat figurines, fish figurines and sea pebbles.