Large volcanic eruptions have cooled the global climate many times in the last 2,500 years and coincided with devastating famine across Europe, new research shows.

New ice-cores from Greenland and Antarctica show the timing of volcanic activity over the last 2,500 years -- the most precise record yet. (photo: shutterstock)

New research presents the most precise record yet of volcanic activity during the last 2,500 years.

In a study published this week in the journal Nature, an international team of scientists use ice-cores and tree-rings to show just how often and by how much volcanoes have cooled the climate of the northern hemisphere -- Finding links between large volcanic eruptions and societal upheaval as far back as the early Roman period. “Using new records we are able to show that large volcanic eruptions in the tropics and high latitudes were the dominant drivers of climate variability, responsible for numerous and widespread summer cooling extremes over the past 2,500 years,” says Michael Sigl in a press release. He is the paper’s lead author and assistant research professor at the Desert Research Institute, USA, and postdoctoral fellow with the Paul Scherrer Institute in Switzerland.

When a volcano erupts it spews out a mass of dust and particles that can travel around the world, blocking out the sun and quickly cooling the earth. Some of this falls back to earth as sulphate particles in rain and snow, and is locked away inside Arctic or Antarctic ice.

At the same time, particles such as Be-10 -- created in the atmosphere by cosmic rays from the sun -- are also trapped in the ice. When sunlight is blocked out by a volcanic eruption, you see changes in the amount of Be-10 in Arctic and Antarctic ice. Scientists have previously extracted these particles from ice-cores to see when volcanoes erupted in the past. But looking so far back in time, they have not been able to say precisely when these eruptions happened or what effect they had of the earth’s climate.

After a large volcanic eruption, you would expect to see it recorded in the ice at either the north or South Pole, or perhaps in both, at the same time.

You would also expect to see evidence of cool temperatures in the aftermath of the volcano. But when the scientists behind the new study compared existing records of volcanic activity from ice-cores with the temperature records preserved in tree-rings there was a problem. They saw that the records did not fit together as they should.

“There were climate changes recorded by tree-rings, that didn’t quite fit with the record of volcanic eruptions from ice-cores,” says Raimund Muscheler, professor of Quaternary Sciences at Lund University in Sweden, and co-author on the new study.

In fact, this conundrum has until now prevented climate scientists from being able to say for sure, whether volcanoes caused many of the well-known periods of climate cooling so far back in time.

The new study presents data from over 20 ice-cores from Greenland and Antarctica going back 2,500 years. The scientists used state-of-the-art techniques to measure sulphate and Be-10 to create the most precise record of volcanic eruptions this far back in time. Together with a new method to count the yearly layers in the ice, they saw that this offset disappeared, and the new ice-cores now fit perfectly with the temperature record, recorded by the trees.

“Now we can tell much more precisely, when the volcanoes erupted and so we can suggest where they erupted,” says Muscheler. “If there is a spike in volcanic sulphate in both Greenland and Antarctica at the same time, then it is clear that it is a tropical volcano, as it was recorded both at the north and south poles,” he says. “Crucially, we can compare this to the temperature record from tree-rings and also to historical documents, such as records of bad harvests,” says Muscheler.

Volcanoes linked to famines and cultural upheaval around the world. The scientists identified over 300 eruptions going back to the early days of the Roman Empire. With this new time-scale, they saw that between AD 500 and 1000, at least 15 out of the 16 coldest years were the result of large volcanic eruptions around the tropics and the northern hemisphere. 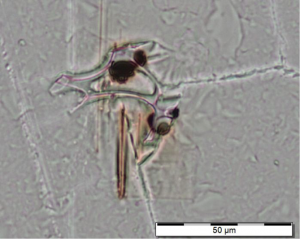 Volcanic glass shards extracted from one of the ice cores from a volcanic eruption that dates back to the 6th century. Tree rings record cooler temperatures for up to 15 years after this eruption, whilst historical documents record famine and mass migration around Europe. (Photo: Gill Plunkett)

The new research also studied ancient documents from as far away as China, the Middle East, and Europe -- accurately-dated eyewitness accounts of sunlight blocked out by a mysterious veil of darkness, or unusually red skies in the evening. All of these, we know today as indications of volcanic eruptions.

One such example dates back to AD 536. Eyewitnesses in the Mediterranean describe a ‘mystery cloud’ that lasted for 18 months.

Temperatures cooled for almost 15 years after these two eruptions, coinciding with the widespread famine and agricultural failures documented throughout Europe and Asia.

Challenging ideas about how climate responds to volcanoes

According to Dr Steven Phipps from the University of New South Wales in Australia, this study is particularly exciting because it gives other scientists critical new data to work with.

Phipps, works with climate models, and is particularly interested in understanding how volcanoes cool the planet.

“I’m ready to get modelling straight away as soon as the paper is published. They have derived a time series that can be fed directly into a climate model,” says Phipps.

For climate modellers like Phipps, the new study not only improves the existing records of volcanic activity, but it extends them back another thousand years.

Phipps can use this data almost immediately to improve our understanding of how the global climate system responds to volcanoes.

“It is becoming increasingly clear that volcanoes are really important to understanding the climate of the last three thousand years. This paper gives us modellers the data we need to drive the computer models,” says Phipps.

“What is really cool about this research is that they show there is a consistent impact of volcanoes on climate, and they even show that volcanoes are one of the dominant drivers of climate cooling over the last few thousand years,” he says.

“Climate models suggest that a volcano cools the climate for about three or four years, and after that, the particles are removed from the atmosphere and the signal is gone,” says Muscheler.

“But we now show that after these large eruptions, effects can last for up to 10 years. So, we have feedbacks in the climate system that prolongs this cooling, but our models don't reproduce this yet. So with this data, we can now start to improve this aspect of our climate models,” he says.