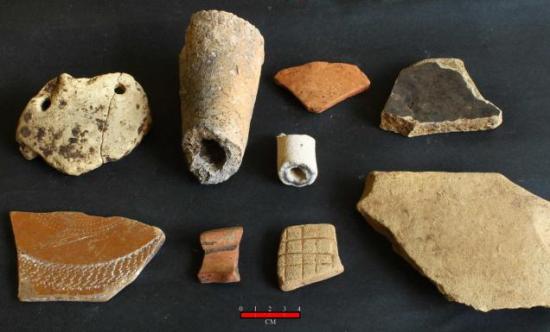 In what could be the strongest evidence yet of the maritime antiquity of the coastal town of Vizhinjam, near here, a laboratory in the United States has carbon-dated charcoal samples archaeologically excavated from there to the 2nd and 3rd century AD.

This could well mean that Vizhinjam, slated to host an international transshipment terminal, was already a port of international repute more than 2,000 years ago. The results of the C-14 dating were received by the Department of Archaeology, University of Kerala, on April 29.

The Vizhinjam excavations were done for three years beginning 2010 by a team led by Ajit Kumar, Head of the Department of Archaeology, University of Kerala. Large quantities of pottery; beads; coins; objects made of gold, iron, copper and glass; and tiles were unearthed from trenches dug in and around an ancient fort on the Vizhinjam coast discovered by a team of researchers led by Dr. Kumar in 2006. The Hindu had reported the discovery of this 800 sq m fort on January 4, 2006.

It was in eight century AD that Sadayan and Ko-Karunandadakkan, kings of the Ay dynasty, made present-day Vizhinjam their capital, and built a fort close to sea. Over time and across many a military campaign, the fort changed hands from the Ays to the Pandyas, the Kulashekharas, and the Chola kings. Sometime between 1070 AD and 1120 AD, Kolothunga Chola is believed to have destroyed the fort which finds a mention, along with a port and a mansion at Vizhinjam, in Sangam literature such as ‘Pandikkovai,’ ‘Iraiyanar Ahapporul Urai,’ ‘Kalingattup-parani’ of Jayamkondar, and ‘Vikrama-solan-ula.’ Moreover the Srivaramangalam copper plates of Pandyan king Nedum Chadayan (8 AD) have a clear reference to Vizhinjam and its fort.

In 2011, two trenches were dug about 700 metres away from the remnants of the fort by a team led by Dr. Ajit Kumar and Robert Harding of the Civilizations in Contact Project (funded by the Golden Web Foundation), University of Cambridge. Porcelain from South China kilns, from Thailand, from the Netherlands and from Britain; two coins, one of which is thought to be more than 1,000 years old; terracotta tiles; coloured glass; and pieces of iron slag were found in these trenches. In 2013, the discovery of Rouletted-ware from the area pushed back Vizhinjam’s antiquity even further.

“This pottery has been unearthed from many historic sites such as Arikamedu in Puducherry, Tamluk, and Alagankulam, and has been dated between 2nd century BC and 2nd or 3rd century AD. In fact, this discovery lent weight to the view that Vizhinjam is the port of Balita mentioned in ‘The Periplus of the Erythraean Sea,’ a work of the first century AD, and the port Blinca mentioned in the Peutinger Map dated to the first few centuries of the Christian era,” Dr. Kumar told The Hindu .

Dr. Kumar said the analysis of charcoal samples, from the lowest levels of ‘trench-3’ at Vizhinjam, by BETA Analytic Inc. in Miami, Florida, returned an antiquity of AD 260 to 280 and AD 325 to 420. Six other samples from the trenches in the area had returned dates of 7th to 11th century AD.