Visoko (Bosnie) : Are there lost pyramids in Bosnia? Probably not.

Are there lost pyramids in Bosnia? Probably not. 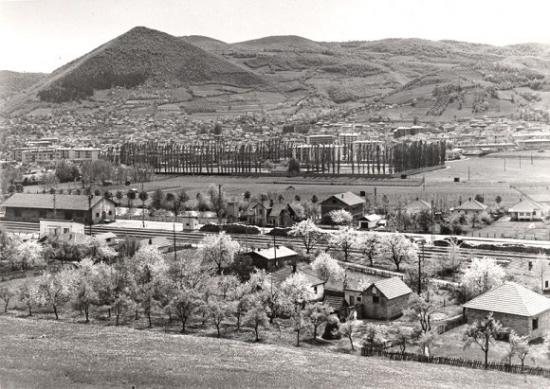 For several years now, European archaeologists have been in a furor over a supposed lost civilization in Bosnia that built the biggest pyramids in the world. Scholars have dismissed the claims, made by Bosnian-American businessman Semir Osmanagic, as pseudoscience, yet he's getting funding from the Bosnian government and was just granted permission to excavate over the objections of the country's archaeological establishment.

Osmanagic is convinced a large hill overlooking the town of Visoko near the Bosnian capital Sarajevo is a pyramid from an lost civilization dating to about 12,000 years ago, when the region was experiencing the Ice Age. The hill is indeed roughly pyramid-shaped, at least the half that faces the town. The other half is a bit lumpy. In fact, if you look at it with Google Earth, it doesn't look like a pyramid at all. Geologists say it's a natural formation and that there are several like it in the region; Osmanagic says many of those hills are pyramids too.

To prove his point Osmanagic set up the "Archaeological Park: Bosnian Pyramid of the Sun" and since 2005 has been fighting for permission to excavate. The permit was granted, but then it was revoked for fear the excavations could damage an existing archaeological site on the top of the hill. This is a medieval fort with Roman foundations built atop a Neolithic settlement. Now permission has been granted again and the work will continue.

A victory for independent science against the narrow vision of academia? Not necessarily.

Looking at the photos on Osmanagic's website on the pyramids in Bosnia, I don't see anything indicating there's a pyramid there. Most of the supposedly worked stone looks like other natural formations I've seen, the so-called "secret tunnels" could be from any era, and the few examples of obviously worked stone could just as easily be medieval. In fact, Byzantine records say there was a town here in the Middle Ages and it has not been found. The Bosnian pyramid team may be destroying a real archaeological site in order to create a fake one.

In an angry letter to Archaeology Magazine, Dr. Hawass wrote, "The discoverer of the "pyramid" in Bosnia, Semir Osmanagic, who claims that a hill near the Bosnia River is a man-made structure built before the end of the last Ice Age, is not a specialist on pyramids. His previous claim that the Maya are from the Pleiades and Atlantis should be enough for any educated reader."

The claim has certainly created a tourist industry in the previously sleepy town, and it's sparking interest in Bosnia's past. So where's the harm?

In an article in Science, Bosnian archaeologists lamented that funding and attention were going to the fanciful pyramid theory while the nation's real heritage remains underfunded and underprotected. Some have even reported being threatened for speaking out against the project. The Bosnian Pyramids have become a matter of national pride for a nation still feeling the wounds of the bitter war of the 1990s. Osmanagic has made Bosnia the cradle of civilization, or as he terms it, "supercivilization".

This is the sort of nationalistic chest-thumping that got the Balkans into trouble in the first place. Osmanagic is playing with fire.