A new study on the human skeletal remains from the ancient Indus city of Harappa provides evidence that inter-personal violence and infectious diseases played a role in the demise of the Indus, or Harappan Civilization around 4,000 years ago. 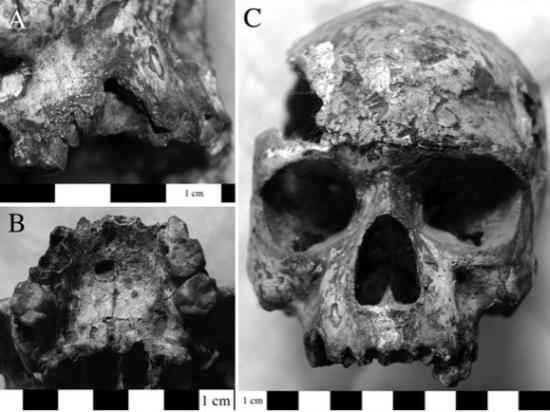 Evidence for maxillary infection in individual G.I.S.15. The lesions included porosity, alveolar resorption, abscessing at the right canine and third premolar, and antemortem tooth loss (a = right ventral view). This individual also had inflammatory changes to the palatine process of the maxilla leading to localized bone destruction and perforation (b = inferior view of palate). There is evidence for porosity and inflammation at the inferior margin of the pyriform aperture, porosity and deformation of the infraorbital foramen caused by infection of the left maxillary sinus (c: ventral view). (Credit: Gwen Robbins Schug, K. Elaine Blevins, Brett Cox, Kelsey Gray, V. Mushrif-Tripathy. Infection, Disease, and Biosocial Processes at the End of the Indus Civilization. PLoS ONE, 2013; 8 (12): e84814 DOI: 10.1371/journal.pone.0084814)

The Indus Civilization stretched over a million square kilometers of what is now Pakistan and India in the Third Millennium B.C. While contemporaneous civilizations in Egypt and Mesopotomia, are well-known, their Indus trading partners have remained more of a mystery.

Archaeological research has demonstrated that Indus cities grew rapidly from 2200-1900 B.C., when they were largely abandoned. "The collapse of the Indus Civilization and the reorganization of its human population has been controversial for a long time," lead author of the paper published last month in the journal PLOS ONE, Gwen Robbins Schug, explained. Robbins Schug is an associate professor of anthropology at Appalachian State University.

Climate, economic, and social changes all played a role in the process of urbanization and collapse, but little was known about how these changes affected the human population.

Robbins Schug and an international team of researchers examined evidence for trauma and infectious disease in the human skeletal remains from three burial areas at Harappa, one of the largest cities in the Indus Civilization. The results of their analysis counter longstanding claims that the Indus civilization developed as a peaceful, cooperative, and egalitarian state-level society, without social differentiation, hierarchy, or differences in access to basic resources.

The data suggest instead that some communities at Harappa faced more significant impacts than others from climate and socio-economic strains, particularly the socially disadvantaged or marginalized communities who are most vulnerable to violence and disease. This pattern is expected in strongly socially differentiated, hierarchical but weakly controlled societies facing resource stress.

Robbins Schug's and colleagues' findings add to the growing body of research about the character of Indus society and the nature of its collapse.

"Early research had proposed that ecological factors were the cause of the demise, but there wasn't much paleo-environmental evidence to confirm those theories," Robbins Schug said. "In the past few decades, there have been refinements to the available techniques for reconstructing paleo-environments and burgeoning interest in this field."

When paleoclimate, archaeology, and human skeletal biology approaches are combined, scientists can glean important insights from the past, addressing long-standing and socially relevant questions.

"Rapid climate change events have wide-ranging impacts on human communities," Robbins Schug said. "Scientists cannot make assumptions that climate changes will always equate to violence and disease. However, in this case, it appears that the rapid urbanization process in Indus cities, and the increasingly large amount of culture contact, brought new challenges to the human population. Infectious diseases like leprosy and tuberculosis were probably transmitted across an interaction sphere that spanned Middle and South Asia."

Robbins Schug's research shows that leprosy appeared at Harappa during the urban phase of the Indus Civilization, and its prevalence significantly increased through time. New diseases, such as tuberculosis, also appear in the Late Harappan or post-urban phase burials. Violent injury such as cranial trauma also increases through time, a finding that is remarkable, she said, given that evidence for violence is very rare in prehistoric South Asian sites generally.

"As the environment changed, the exchange network became increasingly incoherent. When you combine that with social changes and this particular cultural context, it all worked together to create a situation that became untenable," she said.

The results of the study are striking, according to Robbins Schug, because violence and disease increased through time, with the highest rates found as the human population was abandoning the cities. However, an even more interesting result is that individuals who were excluded from the city's formal cemeteries had the highest rates of violence and disease. In a small ossuary southeast of the city, men, women, and children were interred in a small pit. The rate of violence in this sample was 50 percent for the 10 crania preserved, and more than 20 percent of these individuals demonstrated evidence of infection with leprosy.

Robbins Schug said lessons from the Indus Civilization are applicable to modern societies.

"Human populations in semi-arid regions of the world, including South Asia, currently face disproportionate impacts from global climate change," the researchers wrote. "The evidence from Harappa offers insights into how social and biological challenges impacted past societies facing rapid population growth, climate change and environmental degradation. Unfortunately, in this case, increasing levels of violence and disease accompanied massive levels of migration and resource stress and disproportionate impacts were felt by the most vulnerable members of society."