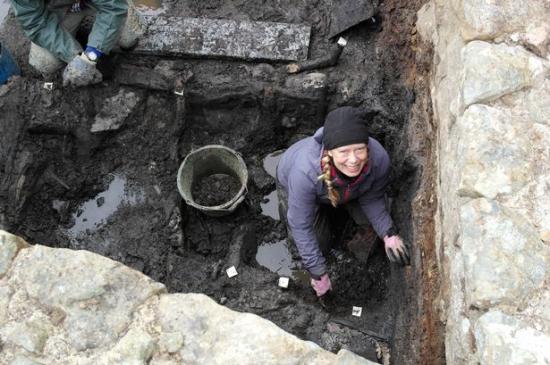 A new season of digging has started at Vindolanda

Over the next five months excavations in a field in Northumberland could shed light on a body-in-a-ditch mystery.

More than 500 volunteers are taking part in the new season of archaeological digs atVindolanda Roman fort.

It will be the second of a five-year research project which is the most ambitious since the early days of the creation of the Vindolanda Trust in 1970.

As the digs progress, the results of last year’s investigations are being sifted.

The project is examining three areas at the Vindolanda site.

They are the last stone fort - the ninth successive base - at Vindolanda, an area below the vicus, or civilian settlement outside the fort walls, and the field to the north.

“This covers over 700 years of frontier history and archaeology,” says director of excavations Dr Andrew Birley. “The aim is to untangle and give a voice to the often very different communities that made Vindolanda and therefore our region, their home.

“It is to explore how each of those groups of people lived their lives through the buildings, material and evidence from the choices that they made while living at the site.”

The field area has already produced a major surprise.

Vindolanda archaeologists, aided by a group of students and their professors from the University of Western Ontario in Canada, explored the remains of what may be the earliest fort yet to be found at Vindolanda, built in timber with a series of massive ditch defences.

The fort ditches were full of rubbish, animal bones, leather and pottery and the team also found several human bones from the same individual.

“These were the remains of a person who had been tossed into the ditch like so much rubbish and left to rot in the open,” says Dr Birley. “It is extremely rare for the Romans to throw someone into a ditch and leave them.

“This is a very rare find, as the Romans typically cremate the dead in the First Century.

“It raises serious questions about who the person in the ditch might have been – a disgraced Roman not given a proper burial, a murder victim or someone’s remains that represented a violent act between the Romans and Britons, such as a battle at Vindolanda?

“When we get back into the ditches this year we may well find more parts of our skeleton, or indeed evidence of other people’s remains being discarded in this way.”

Digging last year also focussed on the south eastern quadrant of the last stone fort, built in the Third Century by the 4th Cohort of Gauls and which continued to the end of Roman Britain and beyond.

The hope is that this area will provide an opportunity to plot the transition of Vindolanda from a Roman military base to the late Fourth and early Fifth Centuries into a British community.

The dig revealed a large quantity of arrow heads, suggesting that barracks on the site housed a century of Roman archers. Other finds included a small stone altar to the god Apollo dedicated by a man named Aprilis.

Nearby, recovered on a roadway, was a small jet medallion in the shape of a foot.

Dr Birley says: “Such artefacts were typically bought from priests by people who had aliments and wished the gods to cure them.

“We can only hope that the jet foot from Vindolanda was discarded once the person’s foot had recovered rather than being lost before it could work its effect.”

There were also the remains of the late-Roman buildings. Some re-used Roman columns and voussoir stones - the interlocking stones from Roman arches.

There was also evidence of Fifth to Seventh Century occupation, including a strap end with a Christian image - the most northerly example to be found of its type.

Deep excavations beneath the Third Century vicus, or civilian settlement outside the stone fort, explored the remains of a much earlier town.

This had well-preserved wattle and daub timber buildings that corresponded to the occupation of Vindolanda from around AD105-120 by the 1st Cohort of Tungrians, or Belgians, just prior to the construction of Hadrian’s Wall.

The buildings appear to have been abandoned in haste, with the inhabitants leaving many of their possessions behind.

An ink pen and ink tablet came from from a circular hut, raising the likelihood of literacy in the vicus.

“The writing tablet and pens from the roundhouse excavation are particularly important as it opens up the possibility of a different set of voices and perspectives,” says Dr Birley.

“Who are these people living outside the walls of the fort?”

It also poses the idea that the native population was bigger than previously thought.

“As soon as troops turn up, towns are created, even before Hadrian’s Wall is built,” says Dr Birley.

The new dig season will continue until September 12.

“It is likely to be another spectacular year adding new evidence and meaning to the incredibly rich and world class Roman heritage from Vindolanda and our region,” says Dr Birley.

The new deep excavations will be looking for an early headquarters building, the nerve centre of the Roman army.

These levels of Vindolanda often have anaerobic conditions which are good for preservation, and previous excavations of these levels have produced the finest record of Roman life from Roman Britain in the form of the ink writing tablets, letters, lists and accounts from 1,900 years ago- the first hand written history of Roman Britain.

Dr Birley says: “If we find what we are looking for it could be one of the defining moments of Roman archaeology for the 21st Century. Roman army headquarters buildings were the main record offices for the communities, repositories for both pay and administration.

“At the moment there are no writing tablets which refer directly to the building of the Wall. Is this about to change?”