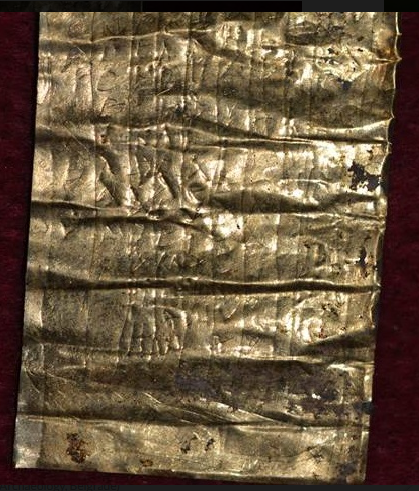 A gold curse tablet dating back to 4th century AD - Institute of Archaeology, Belgrade
Ancient Romans used magical inscriptions to bring vengeance on enemies, unrequited lovers, bad neighbours and relatives. Archaeologists have unearthed the rare finds of these curses at the Viminacium site in the eastern region of Serbia, in the former Roman province of Moesia Superior.

These curse tablets, known as tabella defixionis in Latin, have inscriptions which read, "Let all forces and demons help that…" Some of the artefacts are written in ancient Greek and also in indecipherable languages and unknown symbols, whose meaning is lost today.

They were probably invented by the people who created the curse tablets, and experts theorise that the messages could only be recognised by the gods and demons they were addressed to. The discoveries are hailed as unique as previous curse tablets have been made in lead, not a valuable precious metal such as gold and silver.

"This is a very important archaeological discovery because it shows us how luxurious the life in Viminacium was or how much hope they had in the 'curse tablets' so that they used precious metals," Miomir Korac, the chief archaeologist at the Viminacium site, told NBC News. "According to my knowledge, such tablets have never been found inscribed in gold anywhere. According to the Roman customs, gold was never put into graves."

These archaeological finds, which are believed to date back to the 4th century AD, show evidence of a changing religious landscape, as both Christian and pagan gods are called upon.

"Opposing deities appear on these tablets, as if invoking both Christ and the Antichrist today, or Christ and pagan gods, and that is weird. This shows us that the process of converting to Christianity was slow."

At its prime, the ancient city of Viminacium had a population of around 40,000 people, which made the city a third larger than Pompeii, and was home to many nationalities.

"We found that Christians and pagans were buried together and we can conclude that, at the time, they lived in harmony and tolerance," explained Korac.

Curse tablets were found throughout the Greek and Roman world as well as in ancient Egypt. They were usually inscribed with a stylus on tablets but also in the shape of human figures.

The furious comments from many thousands of years ago are vividly descriptive, as in a curse tablet found in London: "I curse Tretia Maria and her life and mind and memory and liver and lungs mixed up together, and her words, thoughts and memory; thus may she be unable to speak what things are concealed, nor be able." (Translation by the British Museum).

Another reads: "…so long as someone, whether slave or free, keeps silent or knows anything about it, he may be accursed in (his) blood, and eyes and every limb and even have all (his) intestines quite eaten away if he has stolen the ring or been privy (to the theft)".