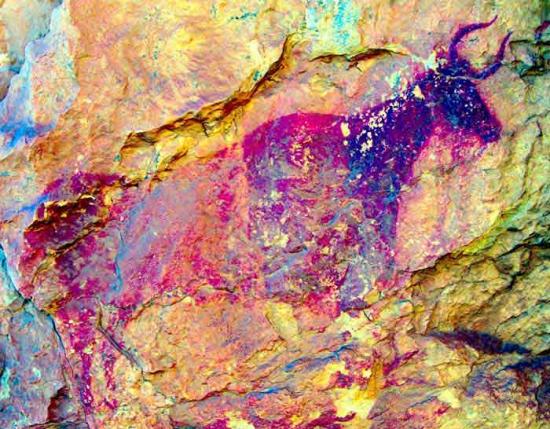 A cave painting of a bull, with colours accentuated by archaeologists. Credit: Courtesy of Ines Domingo

A series of hunting scenes dating from 7,000 years ago have been found by archaeologists on the six-metre long wall of a small cave in the region of Vilafranca in Castellón, eastern Spain—but it is being kept a secret for now.

A layer of dust and dirt covered ten figures, including bulls, two archers and a goat. The murals were exposed to harsh weather but the paintings pigments have not seriously deteriorated.

Inés Domingo Sanz, a research professor at the University of Barcelona, and Dídac Román, a research associate (archaeology) at the University of Toulouse II Le Mirail and University of Valencia, discovered the site while undertaking government-sponsored research into another excavation area in the region. Sanz says that “some of the [painting] details are unique [and unlike anything] across the entire Mediterranean Basin”. A planned publication will throw light on the rare archaeological find.

The cave was discovered in November 2013 but its location will only be revealed once security measures are in place, after vandals defaced a 5,000-year-old rock painting in Spain’s southern Jaén province in April.

A painting of an archer