Archaeologists are baffled by a set of Viking-age stones discovered in the UK that appear to be "earlier than similar monuments in Norway".

The Vikings originated in what is now Denmark, Norway and Sweden and became famous for plundering and raiding their way through Europe in the 11th century. Expert sailors and navigators aboard their longships established settlements in the British Isles, Ireland, the Faroe Islands, Iceland, Greenland, Normandy, the Baltic coast, and along the Dnieper and Volga trade routes in what is now Russia, Belarus and Ukraine. The Vikings spoke Old Norse and made inscriptions in runes – letters in a set of related alphabets used to record various Germanic languages before the adoption of the Latin alphabet.

But Judith Jesch, Professor of Viking Studies at the University of Nottingham, detailed how experts were stunned after uncovering a series of these artefacts known as the runestones.

She told the History Hit podcast: "The most amazing body of Scandinavian runic inscriptions in Britain is actually the runestones of the Isle of Man which are from the core Viking Age – the 10th, possibly early 11th century.

"There are around 30 of them commemorating the dead and they are early hybrid monuments that have runic text with Scandinavian language.

"They are clearly a local product, they are made with local stone, the dating is a bit difficult, but they seem to be earlier than similar monuments in Norway.

The Vikings are famous for their exploits in Europe (Image: GETTY)

"Therefore there is an interesting question – we've always assumed that the people on the Isle of Man came from Norway originally."

The Manx runestones are consequently similar to the Scandinavian ones and are believed to have been made by the Norse population on the Isle of Man.

According to the Irish annals, the Vikings first set foot on the Isle of Man in the year 798.

By 820 they had conquered and settled, establishing a prosperous Viking colony that benefited greatly from the trade between Ireland and the Scottish islands.

And the discovery suggests they may have started making monuments here with runestones that were later seen in Norway. 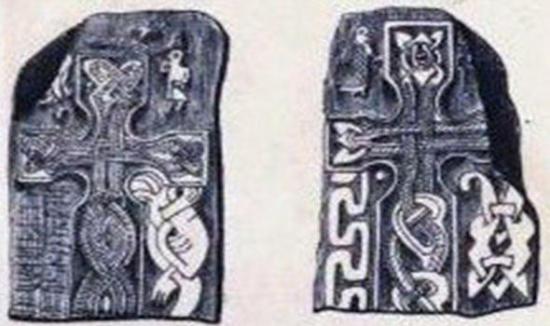 The Manx runestones are similar to Scandinavian ones (Image: WIKI)

Prof Jesch explained how they went on to establish themselves across the British Isles.

She added: "It's a long complicated question but you can go and visit and spend days looking at these wonderful monuments.

"We also have some inscriptions in Ireland – mainly small objects found in the Dublin excavation.

"Then we have inscriptions in Scotland, particularly in the north, in Orkney.

"The most famous there is the graffiti in the chamber tomb of Maeshowe which is from the 12th century."

Runes have been found in several locations across the globe (Image: GETTY)

The expert went on to explain how the runes show a humorous side to the ancient society rarely discussed.

She continued: "They were probably made by visiting Norwegians and Icelanders, they are mainly names, but the f word also appears a lot.

"They were made by a group of people who had been to Jerusalem on a pilgrimage.

"Vikings always had a good sense of humour, there is a tradition in Scandinavia of breaking into burial mounds and finding treasure, but this one didn't have any in it.

"So there are lots of jokes about that, asking where it was hidden."