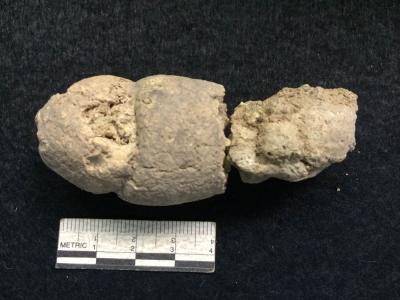 By evaluating the bacteria and fungi found in fossilized feces, microbiologists are providing evidence to help support archeologists' hypotheses regarding cultures living in the Caribbean over 1,500 years ago. They report their findings today at the annual meeting of the American Society for Microbiology.

"Although fossilized feces (coprolites) have frequently been studied, they had never been used as tools to determine ethnicity and distinguish between two extinct cultures. By examining the DNA preserved in coprolites from two ancient indigenous cultures, our group was able to determine the bacterial and fungal populations present in each culture as well as their possible diets," says Jessica Rivera-Perez of the University of Puerto Rico, Rio Piedras, who presented the study.

Various indigenous cultures inhabited the Greater Antilles thousands of years ago. The Dominican Republic and Puerto Rico have thousands of pre-Columbian indigenous settlements belonging to extinct cultures that migrated to the Caribbean at some point in history.

Archaeological excavations in Vieques, Puerto Rico unearthed hand-made tools and crafts as well as fossilized feces dating from 200 to 400 A.D. The presence of two distinct styles of craftsmanship, as well as other clues obtained from the dig sites, suggested these artifacts belonged to two distinct cultures.

"One culture excelled in the art of pottery; in fact, their signature use of red and white paint helped identify them as descendants from the Saladoids, originating in Saladero, Venezuela. In contrast, the second culture had exquisite art for crafting semiprecious stones into ornaments, some of which represented the Andean condor. This helped archaeologists identify the Bolivian Andes as possible origins of this Huecoid culture," says Rivera-Perez.

To help confirm these archeological hypotheses, Rivera-Perez and her colleagues examined the DNA preserved in coprolites from both Saladoid and Huecoid settlements and compared the bacterial and fungal populations found in each. Major differences were detected between the fecal communities of these cultures, providing additional support that they may have had different origins. Additionally, they found fungal and corn DNA in the Huecoid coprolite that suggests the consumption of an Andean fermented corn beverage, further confirming the theory that the Huecoids originated in the Bolivian Andes.

"The study of the paleomicrobiome of coprolites supports the hypothesis of multiple ancestries and can provide important evidence regarding migration by ancestral cultures and populations of the Caribbean," says Rivera-Perez.