Vicálvaro (Espagne): In search of the lost city 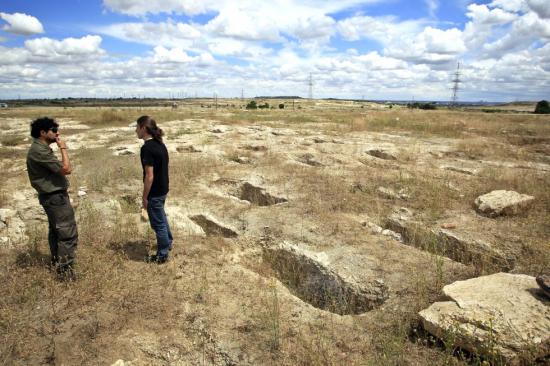 Rows of Visigothic tombs at the Vicálvaro necropolis. / ÁLVARO GARCÍA

It doesn't have a name yet, but there is a search party out looking for it. It is the city that produced the 1,500 bodies found in the Visigothic necropolis of Vicálvaro, which the Madrid government has earmarked for destruction because it has "no relevance." The remains are thought to date back to between the fifth and eighth centuries AD.

Over this early burial site on an enormous dry plain, right next to the highway to Valencia, the Madrid government is planning to build a total of 15,400 housing units.

But before construction begins, regional authorities have granted permission to look for further traces of the people who once dwelled in these parts.

And while scholars search for the missing Visigothic city, its cemetery continues to deteriorate. On this three-hectare lot, most of the 824 graves are covered with brush and poppies. Just half-a-dozen of them, the ones furthest from the road, still preserve their Visigothic marks - smooth flat stones that delineate their perimeter. There are also a few bones, millstones and other types of stones piled up beside the graves. The burial site is located on a stretch of whitish limestone that gave rise to the former name of Vicálvaro, Vicus Albus (white village).

Jorge Vega, the head of the team that found the necropolis, talks about the town that they are looking for. "It can't be very far, just one or two kilometers," he says. "We have already marked out an area, but we have to get to it. We'll get started soon."

Vega says the Vicálvaro discovery is "very valuable" because it provides insight into life in the region many centuries ago.

"The general state of the necropolis was not very good," he adds. "When you open a grave, because of the weather conditions, it soon starts to deteriorate. They are rather hard to maintain in good condition, but there are elements that could definitely be preserved."

The regional government has rejected the idea of preserving the site on the basis that there are 60 others like it in the region, all dating from the same period, and all more accessible than the Vicálvaro cemetery. Two of them have already been turned into museums.

If construction work on the apartment blocks had already begun, this controversy might not even exist. The new Historical Heritage Law, approved last Thursday with the sole support of the ruling Popular Party (PP), eliminates the need for preventive archeological reports on planned construction sites, making it legal to build over historical sites that are not already officially registered as such.

The opposition and the region's archeologists believe the new regulation is tailor-made for the massive Eurovegas casino and entertainment project scheduled to be built in the capital.

On Monday, the Socialist Party demanded that the Vicálvaro necropolis be preserved. The city says it will do whatever regional authorities decide (both are ruled by the PP), but in February the PP's representatives on the city council refused to ask the region to declare the site a Bien de Interés Cultural - heritage of cultural interest - which would afford some degree of legal protection.

United Left representative José Gordo says authorities should turn this place into a museum "so that anyone who wants to can go visit it. At the next local festival there will be games for kids and talks to raise awareness about the site."

This area has also yielded remains from Roman times, the Middle Ages, the era of Islamic rule and other periods of Spanish history. "The definitive reports are not finished yet, and we still need to run DNA tests, but we can already state that this was the necropolis for a nearby population center of around 500 individuals," explains Vega. "We have not yet found any warriors, which means it was likely a community of farmers."

Saúl Martín, one of the archeologists who participated in the nearby dig at Los Berrocales, confirms that 16 centuries ago Vicálvaro was already a blue-collar district, just like it is today. "They were workers. We didn't find any spectacular buildings or lavish grave goods," he says during a visit to the Vicálvaro site.

"They were likely Hispanics who adopted Visigothic customs," says Vega about the early inhabitants of Vicálvaro. "Ethnically they were not Germanic peoples."

The dig chief also says that some of the human remains will be analyzed at a Danish university and others at a Spanish one to extract their DNA. Teeth will be examined to find out what these people ate.

The village was made up of houses with half-buried walls and a wooden roof. There might have been a church, but it would likely have been taken apart during the Arab invasions. "That's another interesting element that we want to find."

Inside the sarcophagi, archeologists found burial items made up of earrings, rings and brooches, which were transferred to the Regional Archeological Museum in Alcalá de Henares.

The graves are organized by families, "forming little groups," explains Vega. The coffins were made of wood with bronze nails, and all graves were carved along an east-to-west line, to mark sunup and sundown.