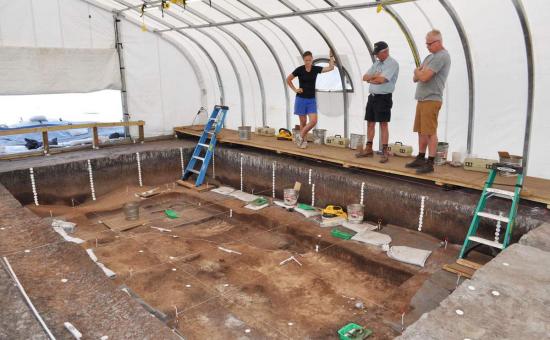 This is an undated contributed photo taken at the Old Vero Man archeological site being excavated by Mercyhurst University's Mercyhurst Archaeological Institute in Vero Beach, Fla., where artifacts have been discovered suggesting that Ice Age mammals and humans were present at the site at the same time 14,000 years ago. Pictured from left to right are Annie Marjenin of the Mercyhurst Archaeological Institute; David Gunter, superintendent of the Indian River Farms Water Control District; and Andy Hemmings, also of the institute. The excavation will continue in January 2015. CONTRIBUTED/ERIE TIMES-NEWS
There in the old dirt at Vero Beach were bone fragments, burned, some of them with cut marks.

James Adovasio, executive director of the Mercyhurst Archaeological Institute, knew the burns and cuts could only be the work of humans -- a revelation that further demolished what had been established wisdom about the founding populations of the Americas.

"It's yet another nail in the 'Clovis First' coffin," said Adovasio, referring to the theory about the first culture in the Americas.

In what Adovasio has called the most extensive Paleo-Indian excavation currently underway in North America, a team from the Mercyhurst Archaeological Institute has been excavating the Old Vero Man site in Vero Beach, Fla.

In the first session of excavation, from January through May, the team uncovered artifacts, including mammal bones, that prove humans coexisted with large prehistoric animals at Vero Beach 14,000 years ago. The discovery validates a controversial theory put forth by E.H. Sellards, who served as Florida state geologist in the early 1900s.

"Sellards was, in fact, right way back when," Adovasio said.

It also stacks more evidence against the once accepted belief that the Clovis people, named after a site discovered in New Mexico in the 1920s, were the first in the Americas. Clovis sites are dated at about 11,200 to 11,500 radiocarbon years ago. Beginning in the 1970s, sites predating Clovis were discovered, including Pennsylvania's Meadowcroft Rockshelter and, now, Vero.

MAI has been excavating at the request of the Old Vero Ice Age Sites Committee, a group of citizens that aims to educate people about the significance of the sites and raise money for the excavation and study of the sites. A second excavation session, scheduled to start in January, will focus on a buried soil layer dating back 19,000 years.

The site is being excavated with the same "extreme rigor" and methods used at Meadowcroft, where Adovasio was principal excavator.

More than 170 species of plants and animals have been found at the site in soil radiocarbon dated to between 13,000 and 14,000 years ago. The moisture and acidity of the soil have allowed the materials to be extraordinarily preserved, Adovasio said. "This will be the most carefully excavated early site in all of Florida, for that matter in all of the Southeast," Adovasio said. "It gives us the opportunity of continuing to enhance our field methods, and it gives us the chance to train students not only from Mercyhurst but other institutions, and not only in archaeology but in related fields."