Portrait of King Philip II of Macedonia in his late years, after having received a wound through his left leg by a lance. Credit: Arturo Asensio.
A team of researchers from Greece, Spain and France has found evidence that

suggests that the bones of King Phillip II of Macedon—father of Alexander the Great, were those found in Tomb I, not those found in Tomb II at the burial site in Vergina, Macedonia. The team's work and their findings have been published in Proceedings of the National Academy of Sciences.
Back in 1977, archeologists discovered ancient tombs at Vergina, and soon thereafter, researchers began offering arguments regarding the identities of the skeletons that were found in them—the focus of most of the attention has been on Tombs I and II, because it is believed they were the final resting place for some of Alexander the Great's relatives—most specifically, his father. Early on, many believed the bones found in Tomb II were his, though the identity of others buried along with him remained a matter of speculation. This theory was further bolstered by work done by a team of researches with results published just this past May. In this new effort, the researchers cite evidence that they believe proves bones found in Tomb I are those of Phillip, and that furthermore, other bones in the same tomb belong to his wife Cleopatra and his newly born baby.

The most striking evidence comes in the form of a leg bone—an upper thigh fused to a shin at the knee with a hole in it—it appears to align with historical texts that describe Philip as suffering a wound from a lance. 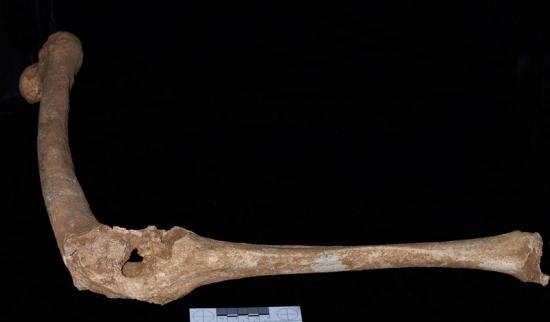 Additional testing showed the bone had fused and smoothed over just a few years time, which also agrees with writings from the time—Phillip was murdered just a few years after suffering the injury. Dating showed the skeletal remains to be that of man approximately 45 years old, which is consistent with the age at which Philip reportedly died. The ancient writings also describe Cleopatra as being young, approximately 18 years old at the time of her death, which occurred shortly after Phillip was killed. Dating of the other bones in the Tomb I showed them to be from a woman of just that age range. Also, the early texts describe the baby, which was killed around the same time as well.