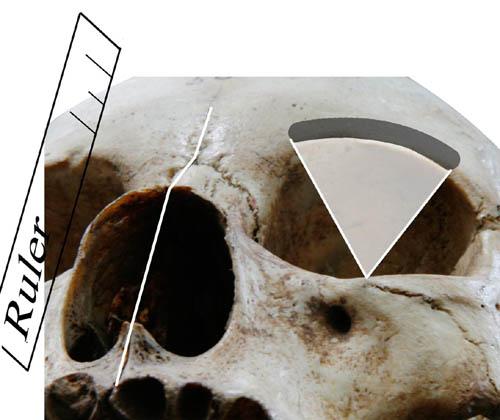 In a study published online 9 November 2012 in the journal of Anthropological Science, scientists from Institute of Vertebrate Paleontology and Paleoanthropology (IVPP), Chinese Academy of Sciences, and University of the Witwatersrand, South Africa, used a newly developed standardized mirroring-based geometric morphometric method to examine regional variation in the orbit shape of contemporary Asian, African, and European populations. Their results show that regional variation in orbit shape exists. The Asian orbital contour was generally tall, rounded, and its inferior contour was symmetrical. The European tended to be square and more inclined, and the African was shorter and broader as compared with the other two samples.

Fig.2 (A) The definition of landmarks, semi-landmarks, and the two divided contours. (B) a mirroring method based on the maxillofrontale and 4 divided margins of the orbit contour. (Image by XING Song)

The osseous orbit in humans is a cone-shaped cavum, formed mainly by the frontal, zygomatic, and maxillary facial bones. Its function is to protect and accommodate the eye, as well as the relevant muscles and nerves. The orbital region was found to display clear variability in its growth rate. The interorbital region changes relatively little after birth, while the lateral wall of the orbit continues to grow throughout childhood, producing a wider adult orbit.

Fig.3 The typical orbit shape of populations from Asia (A), Europe(B) and Africa(C). The white points indicate the maxillofrontale and frontomalare orbitale. (Image by XING Song)

The orbit contour of contemporary adult human is generally quadrangular in shape, but varied regionally in the curvature of the four corners. Most of the previous studies were conducted on the basis of linear measurement and derived indices, or a simple description that considered orbit shape as a non-metric feature. Therefore, they provided limited information about the regional variability of orbit shape, and produced different orbit shapes for a single population.

Researchers also noticed that specimens from these different regions overlapped with each other in orbit shape although regionally specific features were obviously detected. The similarities between the Asian and European samples were much smaller than those between Africans and Asians, or Africans and Europeans.

The most variable area of the eye orbit was concentrated on the internal and lateral aspects of the upper margin formed by the frontal bone, and the internal aspects of the lower margins formed by the zygoma and maxilla. Compared with the superior contour, the orbit shape of the inferior contour from different samples was more easily discerned. The differences in the shape of these bones may partially be due to diet and food-preparation methods.

"The application of geometric morphometrics with the newly developed standardization protocol to examining the orbit shape between individuals from different geographic areas, has demonstrated its effectiveness to quantitatively measure human orbit shape, variation, and population affinity. It can also be used in studies on other areas of orbit shape, which may involve ontogeny, sexual dimorphism, evolution, integration with other cranial or facial features”, said first author Dr. XING Song of the IVPP.

This work was supported by grants from Chinese Academy of Sciences, Ministry of Science and Technology, National Natural Science Foundation of China and DST of South Africa.