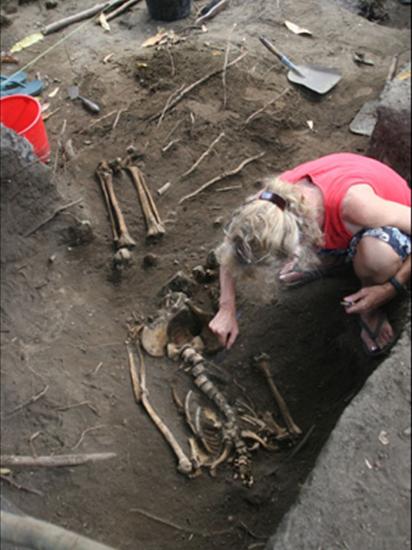 Analysis of ancient human bones supports the idea that the first inhabitants of Vanuatu developed horticulture as they ran out of wild resources.

Around 2500 years ago there was a shift in the Lapita people towards a greater reliance on cultivated plants such as yam, taro and banana, according to an isotopic analysis of bones reported in a recent issue of PLOS ONE.

"It contributes to a debate that's been going on for generations," says co-author Dr Stuart Bedford, an archaeologist from the Australian National University.

The Lapita were the first group of people to venture into remote Oceania, east of the Solomon Islands. They are believed to have arrived in the previously uninhabited islands, including Vanuatu, around 3100 years ago.

But there has been debate since the 1970s over the degree to which the Lapita relied on horticulture to survive, says Bedford.

"Some people have argued in the past they were just hunters and gatherers bouncing from one island to the next and gardens came later with different people."

Now, the researchers have found a site that has skeletal remains ranging from the time of the earliest Lapita settlers to as recent as 300-150 years ago.

The site on the tiny island of Uripiv off Vanuatu's Malakula island is the first to provide an entire record of all pre-European settlement in one place.

"We've been able to find burials there almost all the way through the sequence," says Bedford.

An isotopic analysis of this site shows a clear transition towards a diet containing more horticultural produce at the end of the period of the Lapita culture, says Bedford.

Looking at stable isotopes in bone collagen can shed light on diet as the protein consumed is is used to synthesise collagen, says team member Dr Rebecca Kinaston, a bioanthropologist from Otago University in New Zealand.

The amount of carbon 12 and carbon 13 isotopes in collagen reflects different ecosystems and the ratios of these two reflect whether the diet was marine or terrestrial, she says.

On the other hand, nitrogen isotope ratios reflect the position of the food in the trophic system - in other words, whether it is plant or animal.

In a previous analysis of bones from the Vanuatu island of Efate, the researchers found evidence that the earliest Lapita were living off the land, consuming quite a bit of fish, shellfish, marine turtles as well as wild birds and fruit bats.

Bedford and colleagues hypothesised that the Lapita would have needed this approach while they were building up their agricultural systems.

Other findings show evidence of tortoises and birds going extinct around the same time as the istopes show a transition towards a more horticultural diet.

"There's a combination of gardens being established and wild resources being impoverished," says Bedford.

The hypothesis is also supported by the discovery of microfossil remains of taro, yam and banana in early Lapita sites.

"There's no yam or taro or banana naturally in Vanuatu so people had to bring them with them to establish gardens," says Bedford.

Kinaston says the microfossils were found both in the soil and in teeth plaque, showing the plants were being eaten by the Lapita people.

She says an increased reliance on gardens would have had both ecological and cultural drivers, as particular foods were need for ceremonies.

Bedford says the archaeological sites in Vanuatu are uniquely preserved by a covering volcanic ash, and because they are being uplifted and are therefore not vulnerable to erosion by the sea.

The research has been carried out over a 10-year period with permission from the local community, he says.