Vallée des Rois (Egypte): One of the world's oldest sun dial dug up 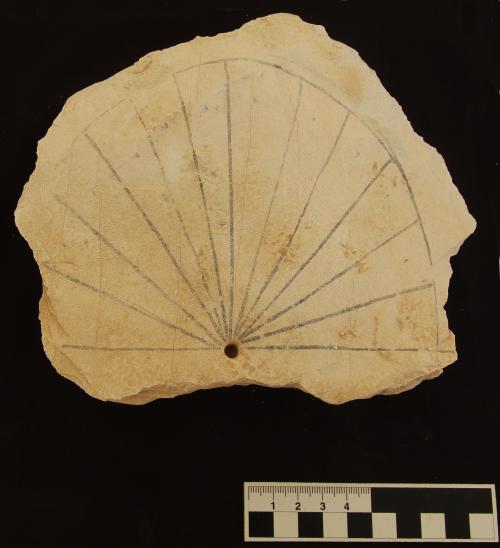 Significant find: After thousands of years the Egyptian sun dial was brought back to light. Credit: University of Basel

During archaeological excavations in the Kings' Valley in Upper Egypt a team of researchers from the University of Basel found one of the world's oldest ancient Egyptian sun dials. The team of the Egyptological Seminar under the direction of Prof. Susanne Bickel made the significant discovery while clearing the entrance to one of the tombs.

During this year's excavations the researchers found a flattened piece of limestone (so-called Ostracon) on which a semicircle in black color had been drawn. The semicircle is divided into twelve sections of about 15 degrees each. A dent in the middle of the approximately 16 centimeter long horizontal baseline served to insert a wooden or metal bolt that would cast a shadow to show the hours of the day. Small dots in the middle of each section were used for even more detailed time measuring.

The sun dial was found in an area of stone huts that were used in the 13th century BC to house the men working at the construction of the graves. The sun dial was possibly used to measure their work hours. However, the division of the sun path into hours also played a crucial role in the so-called netherworld guides that were drawn onto the walls of the royal tombs. These guides are illustrated texts that chronologically describe the nightly progression of the sun-god through the underworld. Thus, the sun dial could also have served to further visualize this phenomenon.

During this year's excavation in cooperation with the Egyptian authorities and with the help of students of the University of Basel over 500 mostly fragmentary objects that had been recovered in former seasons were documented and prepared for further scientific examination. This also includes all the material of the lower strata of tomb KV 64 found in 2012. Inside the roughly 3500 year old tomb Basel researchers had discovered a sarcophagus that was holding the mummy of a woman named Nehemes-Bastet.