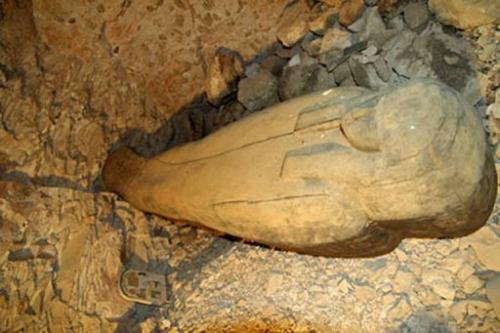 A handout picture released by Egypt's Supreme Council of Antiquities shows the grave of Nany of the 22nd Dynasty, a singer of the Egyptian deity Amun-Re, which was discovered near the Temple of Karnak in the southern ancient city of Luxor during excavations by Swiss archaeologists.

Swiss archaeologists have discovered the tomb of a female singer dating back almost 3,000 years in Egypt's Valley of the Kings, Antiquities Minister Mohammed Ibrahim said on Sunday.

The rare find was made accidentally by a team from Switzerland's Basel University headed by Elena Pauline-Grothe and Susanne Bickel in Karnak, near Luxor in Upper Egypt, the minister told the media in Cairo.

The woman, Nehmes Bastet, was a singer for the supreme deity Amon Ra during the Twenty-Second Dynasty (945-712 BC), according to an inscription on a wooden plaque found in the tomb.

She was the daughter of the High Priest of Amon, Ibrahim said.

The discovery is important because "it shows that the Valley of the Kings was also used for the burial of ordinary individuals and priests of the Twenty-Second Dynasty," he added.

Until now the only tombs found in the historic valley were those linked to ancient Egyptian royal families.