Valencia (Espagne) : Bacteria That Clean Art: Restorers and Microbiologists Use Bacteria to Make Works of Art Shine Like New

Bacteria That Clean Art: Restorers and Microbiologists Use Bacteria to Make Works of Art Shine Like New

Researchers at the Institute of Heritage Restoration (IRP) and the Centre for Advanced Food Microbiology (CAMA), both from the Polytechnic University of Valencia (Spain), are beginning to experiment with this new technique on the frescoes of Antonio Palomino from the 17th century in the Church of Santos Juanes in Valencia.

They have shown that a certain type of micro-organism is capable of cleaning works of art in a fast, specific and respectful way as well as being non-toxic for the restorer and the environment. 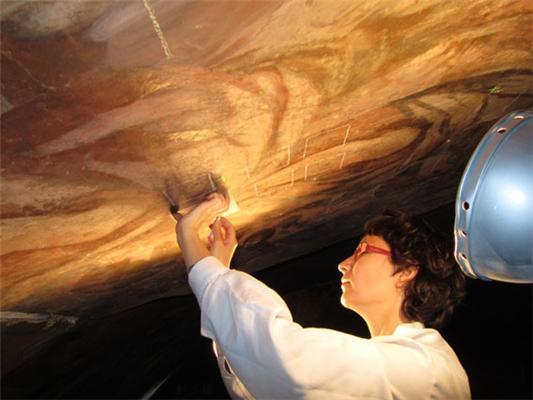 Pilar Bosch working on the paintings in the Church of Santos Juanes in Valencia. (Credit: Image courtesy of Asociación RUVID)

These developments were announced recently at a seminar held at the Polytechnic City of Innovation, which was attended by the creators of these techniques who showed in detail its application in the case of Valencia and in the murals of the Campo Santo di Pisa, Italy.

Using bacteria for the first time

The project came about when the IRP was in the process of restoring the murals of the Church of Santos Juanes that were virtually destroyed after a fire in 1936 and were improperly restored in the 1960s. The researchers tested new techniques for filling with transferred printed digital images in spaces without painting, but had great difficulty dealing with salt efflorescence, the white scabs caused by the build up of crystallized salts and the enormous amount of gelatine glue remaining on the pulled-off murals.

Therefore, Rosa María Montes and Pilar Bosch travelled to Italy to learn from the authors about the pioneering studies that used bacteria to remove hardened glue that was very difficult to treat with conventional methods.

The restoration of the Campo Santo di Pisa wall paintings was performed under the direction of Gianluiggi Colalucci, restorer of the Sistine Chapel, and his colleagues Donatella Zari and Carlo Giantomassi who applied the technique developed by microbiologist Giancarlo Ranalli. The researcher had also been testing with black crusts that appear on sculptures and artistic monuments.

Back in Valencia, the multidisciplinary team perfected this method and trained the most suitable strain of Pseudomonas bacteria to literally eat the saline efflorescence found in the lunettes of the vault behind which pigeons nest.

"By the action of gravity and evaporation, the salts of organic matter in decomposition migrate to the paintings and produce a white crust hiding the work of art and sometimes can also cause the loose of the painting layer" says Pilar Bosch.

These scientists have managed to reduce the application time, and have also innovated in the way of extending the bacteria. According to Dr. Bosch: "In Italy they use cotton wool to apply the micro-organisms. We, however, have developed a gel that acts on the surface, which prevents moisture from penetrating deep into the material and causing new problems.

"After an hour and a half, we remove the gel with the bacteria. The surface is then cleaned and dried." Without a wet environment, the remaining bacteria die.

The advantages of the new process

To finish with the salt crusts problem on works of art, specialists have opted so far for using reactive chemicals. These products, however, are aggressive, non-selective and toxic.

The second option is to erode the crust by mechanical means, but this is time consuming and can also damage the paint. Bacteria, however, are completely harmless to people, paintings and the environment and are also an effective, specific and quick to end the problem.

The research project Microbial Biotechnology applied to the cleaning and surface restoration of works of art was funded through the R&D support program of the Polytechnic University of Valencia and concluded with Pilar Bosch's Doctoral Thesis that received a grant from the Spanish Ministry of Science and Innovation.

So far the new method has been tested on two lunettes of the vault and scientists expect to apply it on another two also located on the third of the church where the Institute of Heritage Restoration is currently working.

"After the good results of the tests we will continue the studies and improve the technique with the aim of transferring it to other surfaces. As in nature we find different species of bacteria that feed on almost anything, we are convinced that we can eliminate other substances from different types of materials," concludes the researcher. The CAMA has requested more funding from the University and is considering partnerships with private businesses.