7000BC: The dawn of cinema brought to life at Museum of Archaeology and Anthropology

Some of the world’s oldest engravings of the human form – prehistoric rock art from the Italian Alps – have been brought to life by the latest digital technology at Cambridge Unviersity’s Museum of Archaeology and Anthropology.

Human beings have engraved the rocks with their everyday lives and stories. It’s a kind of visual autobiography. 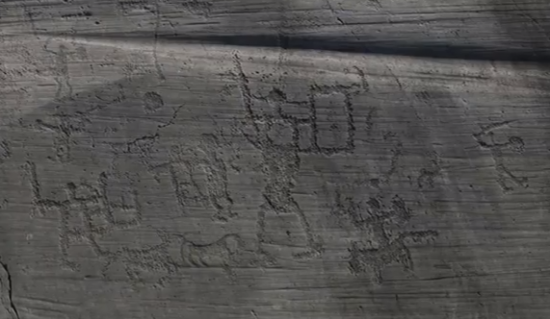 • P • I • T • O • T • I • is a multimedia digital rock art exhibition in the South Lecture Room of the Museum of Archaeology and Anthropology (MAA), on display until March 23. This is the first time it has been on display in the UK.

It brings some of the earliest human figures in European rock art to life with interactive graphics, 3D printing and video games; exploring the potential links between the world of archaeology and the world of film, digital humanities and computer vision.

The images on display are just a fraction of the 300,000 rock engravings that act as an archive of nearly 10,000 years of human history at the UNESCO World Heritage Site in Valcamonica, detailing how a small clan of hunter-gatherers eventually became part of the Roman Empire.

The engravings were made from as early as 7,000BC and continued to be made right up till the 16th century AD, with the richest activity taking place in the Iron Age (1100BC-200BC, before the Roman Empire).

Now, a host of artists have injected digital life into these rock-art figures, with video projections, an ambient cinema and an interactive touch screen table where multiple visitors can explore and play with a digitised rock face.

A large projection of the Valcamonica is hooked up to a video-game style joystick which can be used to navigate the valley and discover the carvings, and detailed scans have allowed the creation of 3D printed panels which visitors can touch.

Dr Frederick Baker, Senior Research Associate at the McDonald Institute of Archaeological Research, said: “Human beings have engraved the rocks with their everyday lives and stories. It’s a kind of visual autobiography. Through the help of digitisation we discover this tribe and get insight into the symbols which actually adorn the rock, to get these symbols moving.

“Visitors can interact and discover with their fingers in a tactile manner that was impossible until today. Now in the 21st century digital art allows the rock art to move from the valley onto the screens and into the digital world that surrounds us.”

The exhibition grew from years of research by Dr Christopher Chippindale and Dr Frederick Baker, both members of the Cambridge University Prehistoric Picture Project. Pitoti is a word from the Lombard dialect and is a local word describing these engraved figures as “little puppets”.

Dr Chippindale said: “What European rock art gives us is the world of prehistoric Europeans, as they themselves experienced it and understood it. Our prehistoric ancestors chose to make engravings of animals, but few of plants. Many of deer, but few of sheep, and vast numbers of armed warriors in opposed pairs. Why? Because those aspects of their lives were vital and central to them.”

The images depicted also tell the story of how innovations spread across continents.

“Horses appear, as do ploughs and carts,” said Professor Graham Baker from the MacDonald Institute. “Their wheels are a huge innovation which leads later to chariots. The engravings of musical instruments remind us that the arts were also part of prehistoric life.”

According to Dr Baker, the link between the rock art and the digital animations are stronger than might be imagined.

He added: “Some of the humans and animals in the art are made in rather rigid forms. Others look to be in lively, animated motion – frozen at a certain moment as if they were stills from an animated cartoon. What the figures cannot do is move: there were no film cameras or animation studios in prehistoric times. But with our cameras and studios, today we can take the metaphor literally. So much the ancient artists could not do – working only with hammer and stone against tough resistant rock – our new digital technologies can.”