Uxul (Mexique): Archaeologists discover the tomb of a Maya prince 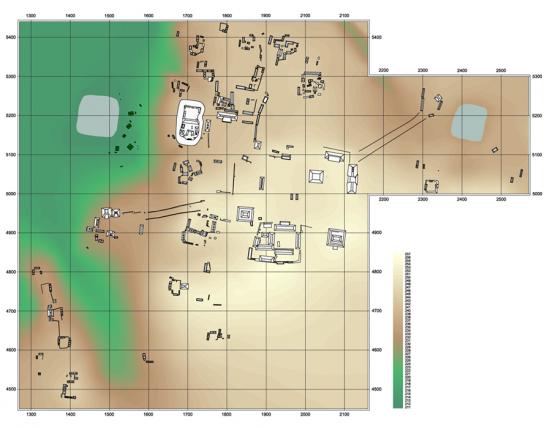 Archaeologists from the Department of Anthropology of the Americas at the University of Bonn have been excavating for the past four years together with the Mexican National Institute of Anthropology and History in the Maya city of Uxul in Campeche, Mexico. The aim of the excavation project under the direction of Prof. Dr. Nikolai Grube and Dr. Kai Delvendahl is to investigate the process of centralization and collapse of hegemonic state structures in the Maya Lowlands using the example of a mid-sized classic Maya city (Uxul) and its ties to a supra-regional center (Calakmul). Research at Uxul, located close to the border with Guatemala, is being funded by the Deutsche Forschungsgemeinschaft (DFG).

Since 2011, excavations have concentrated on the royal palace complex, which is located directly south of the main plazas in the center of Uxul. The palace extends 120 x 130 meters and consists of at least eleven individual buildings which surround five courtyards. "The palace complex was built around 650 AD, a time when the neighboring ruling dynasty from Calakmul was extending its influence over large areas of the Maya Lowlands," explains Professor Grube. In 2011, six sculpted panels were discovered during excavations of the southern stairway of the largest building of the group, Structure K2. Four of these panels depict kings from Calakmul, playing ball. The similarities in the layout of the centers of Calakmul and Uxul and especially of the main palace complexes in the two cities let the researchers to suggest that Uxul, originally a smaller independent kingdom, may have been temporarily ruled and inhabited by members of the Kaan Dynasty of Calakmul. Through recent excavations in several of Uxul´s central buildings, the changes in the physiognomy of the city´s center can be linked directly to the time of military and political expansion of the Kaan Dynasty during the reign of Yukno´m Ch´een II, in the first half of the 7th century. However, the influence subsided after 705 AD, and there is a strong likelihood that a local ruling family came back to power for a few generations. At the start of the 9th century, Uxul was almost completely abandoned. 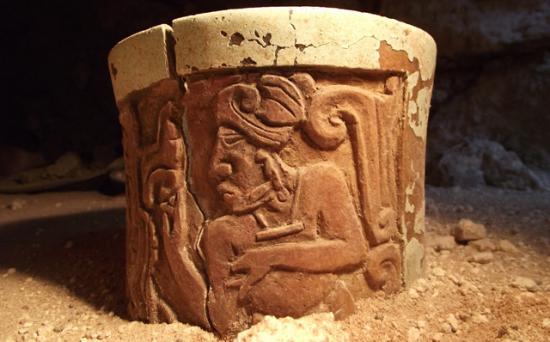 "During this year´s excavation below one of the southern rooms of Structure K2, we have discovered a richly furnished tomb, which can be dated to the time right after the influence of Calakmul in Uxul had ended" explains Dr. Delvendahl. The walls of the crypt are made of rough stone and the chamber was covered with a corbel vault, typical for the Maya culture. In the interior of this tomb chamber which dates back about 1,300 years, the remains of a young man were discovered who was buried on his back with his arms folded. Deposited around him were four ceramic plates and five ceramic vases in an exceptionally preserved state, some of which were decorated with spectacular paintings and moldings. A unique plate, painted in the famed Codex-Style, was covering the skull of the deceased.

Vessel with dedication may point to the identity of the deceased

"On one of the vases, there was a simple dedication, written in elegantly molded hieroglyphics, which read: '[This is] the drinking vessel of the young man/prince'. Also a second molded vessel appears to mention a young man or prince" says Professor Grube. Although these references are not definite clues as to the identity of the departed, the location of the tomb and the absence of certain status markers, such as jade jewelry, would indicate that the deceased was a young male member of the ruling family who was not in direct line for the throne. A possible date on one of the vessels corresponds to the year 711 AD; therefore the death of the young prince and the construction of his tomb can be dated back to the second or third decade of the 8th century. The exceptionally preserved ceramics in particular make this tomb one of the most significant discoveries of its kind in the entire Maya Lowlands.