Utah (USA): Rock Art May Be Thousands of Years Younger Than Was Thought 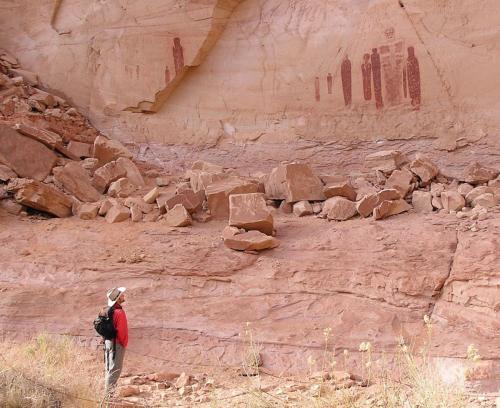 Utah State University geologist Joel Pederson gazes at the 'Holy Ghost' grouping of human-like figures painted on a rock face of the Great Gallery of Canyonlands National Park’s Horseshoe Canyon in southern Utah. Pederson is lead author on a paper in the Aug. 25 issue of the online Early Edition of the Proceedings of the National Academy of Sciences suggesting the prehistoric Barrier Canyon-style rock art is younger than previously thought. Photo courtesy of Joel Pederson/Utah State University.
Ancient Barrier Canyon-style paintings crafted on sunset-washed rock faces of the Great Gallery, located in Horseshoe Canyon in southern Utah's Canyonlands National Park, are younger than expected, say Utah State University scientists.
In the Aug. 25, 2014, online 'Early Edition of the Proceedings of the National Academy of Sciences,' USU scientists Joel Pederson, Steven Simms and Tammy Rittenour; USU alum Melissa Jackson Chapot of Wales' Aberystwyth University, Reza Sohbati and Andrew Murray of Aarhus University and  the Technical University of Denmark, and Gary Cox of Canyonlands National Park report findings from studies using cutting-edge luminescence dating techniques that narrow the time frame for the famed paintings of enigmatic human-like figures. These results disprove proposed hypotheses of the age of the prehistoric drawings, thought by some to be among the oldest artifacts of the American Southwest.

"The most accepted hypotheses pointed to the age of these paintings as 2,000 to 4,000 years old or perhaps even 7,000 to 8,000 years old," says Pederson, associate professor in USU's Department of Geology and lead author on the paper. "Our findings reveal these paintings were likely made between 1,000 to 2,000 years ago."

The USU-led team's findings strike a key point about the art's creators: They may have co-existed with the Fremont people, who are credited with carving distinctly different pictographs found in the same region.

"Previous ideas suggested a people different from the Fremont created the paintings because the medium and images are so different," Pederson says. "This raises a lot of archaeological questions."

For his part, Pederson is focused on the geology that sheds light on the timing of the artwork's creation.

"First, we examined two approaches that enabled us to 'draw a box' around a probable window of time," he says.

One approach involved analysis of stream deposits that pegged the paintings' age as younger than surrounding sediment. The other utilized the fact the paintings were older than a rock fall that occurred at the site.

"Luminescence dating allowed us to document the timing of these geologic events," Pederson says. "A third, new approach allowed us to narrow the window even more."

With assistance from colleagues at Denmark's Nordic Laboratory for Luminescence Dating, the Aggies estimated the exposure time of rock surfaces at the site that provided the study's final results.

"By synthesizing these three approaches, we've gained more chronological information than ever before," Pederson says. "This opens the door to new insights into past cultures and landscapes."