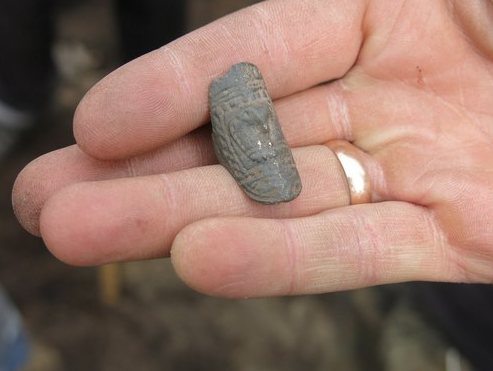 Archaeologists uncovered a 2,000-year-old bronze ring in Siberia that was most likely used by ancient tribes to worship polar bears.  Novosibirsk State University

A Russian student has made a rare discovery in Siberia.

Alexander Korchagin, a student at Novosibirsk State University, discovered a 2,000-year-old bronze ring that may have belonged to an ancient tribe that saw polar bears as sacred animals, the Siberian Times reports.

“The ring is tiny in diameter so even a young girl, let alone a woman, cannot wear it. We concluded that it was used in a ritual connected with a bear cult and was put on the bear claw,” said archaeologist Andrey Gusev, from the Scientific Research Centre of the Arctic in Salekhard.

The ring was found during an excavation at Ust-Polui, an ancient sanctuary in Salekhard that sits on a bank of the Polui River, not far from the confluence with the Ob River. Since 1932, excavations have taken place at the site, which is believed to have functioned as a spiritual center since the first century B.C.

Archaeologists uncovered a 2,000-year-old bronze ring in Siberia that was most likely used by ancient tribes to worship polar bears.  Novosibirsk State University

“Ust-Polui is rich in such objects. More than this, many of them have genuine artistic value and help us understand something about the beliefs of these ancient inhabitants. This is the case with this ring showing the head and paws of a bear, which we have found this year,” Gusev said.

While the Khanty tribes left no written evidence for their existence, the ring’s discovery may help fill in the gaps on how the ancient tribe lived.

“After killing the bear they had a bear festival to honor the animal's memory,” Gusev said. “The head and front paws of the bear was adorned with a handkerchief, rings, and left lying a few days in the house. This combination of images on the ring and the fact that it was found in the sanctuary of Ust-Polui led us to believe that there was also practiced a bear cult.”

This isn’t the first relic uncovered at the site. This past year archaeologists unearthed a bird with a mask on its chest and a pendant showing a furry animal biting a bird -- both made from bronze.

Natalia Fedorova, a senior fellow from the Center for the Study of the Arctic, says the remote location functioned as an “intertribal sacred place” in the first century BC.

"It was located on the crossroads of the natural zones and the cultural traditions,” Fedorova said. “While meeting there during the sacred ceremonies the people from various territories of the Ob region exchanged knowledge, technology and cultural achievements, in these meetings they created new cycles of magic legends and epic tales, the motifs of which inspired the ancient artists.”

Yearly excavations have taken place at the site since 2006 and are scheduled to continue until 2015.

“We can see that this sanctuary is the priceless source for the study of ancient metallurgy, bone-carving crafts, reindeer herding, religion, culture contacts and many other aspects of life in the ancient population of northwest Siberia,” Gusev said, adding that the findings will be displayed at a museum in Salekhard.