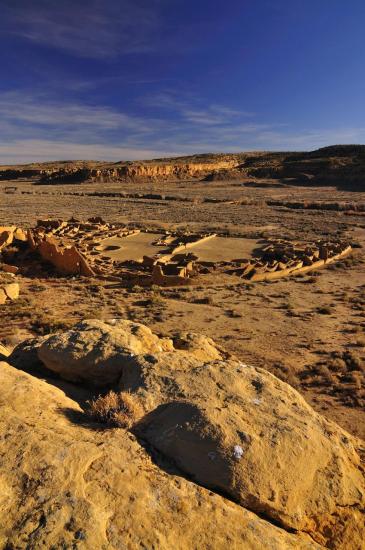 It's a given that, in numbers terms, the 20th Century was the most violent in history, with civil war, purges and two World Wars killing as many as 200 million people.

But on a per-capita basis, Washington State University archaeologist Tim Kohler has documented a particularly bloody period more than eight centuries ago on what is now American soil. Between 1140 and 1180, in the central Mesa Verde of southwest Colorado, four relatively peaceful centuries of pueblo living devolved into several decades of violence.

Writing in the journal American Antiquity, Kohler and his colleagues at WSU and at the University of Colorado-Boulder document how nearly nine out of ten sets of human remains from that period had trauma from blows to either their heads or parts of their arms.

"If we're identifying that much trauma, many were dying a violent death," said Kohler, whose study was funded by the National Science Foundation.

Yet at the same time, in the northern Rio Grande region of what is now New Mexico, people had far less violence while experiencing similar growth and, ostensibly, population pressures. Viewed together, said Kohler, the two areas offer a view into what motivates violence in some societies but not others. The study also offers more clues to the mysterious depopulation of the northern Southwest, from a population of about 40,000 people in the mid-1200s to none 30 years later.

From the days they first arrived in the Southwest in the 1800s, anthropologists and archaeologists have for the most part downplayed evidence of violent conflict among the early farmers in the region. A minority raised the specter of violence but lacked a good measure for it.

Meanwhile, Kohler and his colleagues are examining the role of factors like maize production, changes to the climate, and growing population in changing levels of violence. A paper of his published in June in the Proceedings of the National Academy of Sciences found that the Southwest had a baby boom between 500 and 1300 that likely exceeded any population spurt on earth today.

Social structures among people in the northern Rio Grande changed so that they identified less with their kin and more with the larger pueblo and specific organizations that span many pueblos, such as medicine societies. The Rio Grande also had more commercial exchanges where craft specialists provided people both in the pueblo, and outsiders, specific things they needed, such as obsidian arrow points.

But in the central Mesa Verde, there was less specialization.

"When you don't have specialization in societies, there's a sense in which everybody is a competitor because everybody is doing the same thing," said Kohler. But with specialization, people are more dependent on each other and more reluctant to do harm.

Kohler and his colleagues also cite Harvard psychologist Steven Pinker's thinking in his book, The Better Angels of Our Nature: Why Violence Has Declined.

"Pinker thought that what he called 'gentle commerce' was very important in the pacification of the world over the last 5,000 years," said Kohler. "That seems to work pretty well in our record as well."

"They were resisted," Kohler said, "but resistance was futile."

From 1080 to 1130, the Chaco-influenced people in Southwest Colorado did well. In the mid-1100s, there was a severe drought and the core of Chaco culture fell apart. Much of the area around Chaco lost population, and in 1160, violence in the central Mesa Verde peaked. Slightly more than a century later, everyone left that area, too.

"In the Mesa Verde there could be a haves-versus-have-nots dynamic towards the very end," said Kohler. "The people who stayed the longest were probably the people who were located in the very best spots. But those pueblos too were likely losing population. And it might have been the older folks who stuck around, who weren't so anxious to move as the young folks who thought, 'We could make a better living elsewhere.'" Older, or with too few people to marshal a good defense, the remaining people in the Mesa Verde pueblos were particularly vulnerable to raids.

At least two of the last-surviving large pueblos in the central Mesa Verde were attacked as the region was being abandoned. Some of their inhabitants probably made it out alive, but, says Kohler, "Many did not."