Ancient America. A survey of hundreds of archaeological sites in the northeastern United States  shows that when the climate changed, 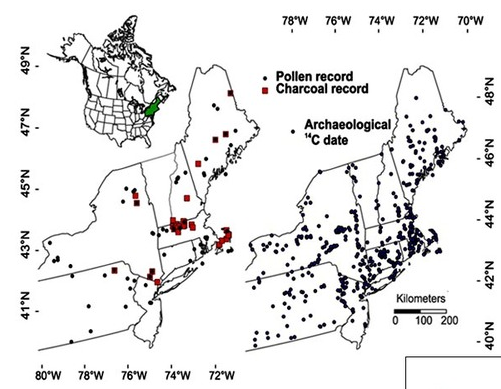 prehistoric humans shifted the tools they used, such as these fluted spearhead points once used to hunt caribou (inset). 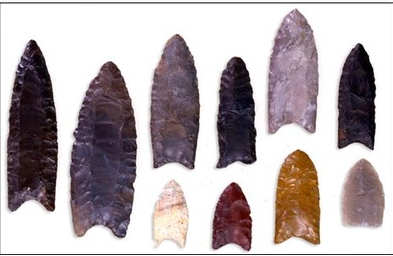 Earth is warming, climate researchers say, and sooner or later we will have to adjust our lifestyles if we want to adapt and survive. Perhaps we should take a cue from earlier occupants of North America. A new study finds a strong correlation between changing climate and changing culture in the prehistoric United States.

Archaeologists divide the prehistory of North America into three broad cultural phases: the Paleoindian, Archaic, and Woodland periods. They are characterized by an increasing trend toward sedentary lifestyles and shifts in the kinds of plants and animals people lived on, as well as changes in the kinds of tools and other artifacts they used. For example, during the Paleoindian period, which began roughly 13,500 years ago, humans lived in small nomadic bands and hunted big game such as caribou; the Archaic period, which began in the Northeast about 11,250 years ago, was marked by a shift to smaller game, the rise of fishing, and semipermanent base camps; and the Woodland period, starting about 3000 years ago, saw the beginning of agriculture and full-fledged village life as well as the advent of pottery.

The archaeological record often reflects these cultural transitions. Fishing hooks show up in the Archaic period, for example, and pottery for storing grain first appears during the Woodland period.

Did climate change cause these shifts? Some researchers say yes. In 2005, for example, a team led by archaeologist Paige Newby of Brown University found that during a cold snap called the Younger Dryas, which lasted from 12,900 to 11,600 years ago, Paleoindians used a special spearhead called a fluted point to hunt large game such as the cold-adapted caribou. But they abandoned its use as soon as things began to warm up when the Younger Dryas ended, the caribou disappeared, and Earth began to enjoy temperatures similar to today's.

To see just how tight the connections between prehistoric climate and culture might be, a team at the University of Ottawa in Canada, led by geographer Samuel Munoz, analyzed the best available data from the northeastern United States. The study area covered archaeological sites from Maine to Pennsylvania and included 1887 radiocarbon dates from more than 500 sites, 63 pollen and 40 charcoal records (which indicate what kinds of plants were present), as well as isotope records from lake sediments and lake-level measurements (which give indications of temperature and soil moisture).

The team found that nearly all of the transitions between one cultural period and the next occurred at times of ecological and environmental changes. Thus the Paleoindian period, 13,500 to 11,250 years ago, was characterized by the presence of cold-adapted plants such as sedges and spruce and pine trees; the so-called Early Archaic period, 11,250 to 8200 years ago and corresponding to warmer climes, saw a decrease in pine and an increase in oak trees; and 8200 years ago, when another, short cold spell hit much of the world, prehistoric humans underwent another cultural shift known as the Middle Archaic period. The Late Archaic, beginning 5250 years ago, and the Woodland period 3000 years ago were accompanied by yet more climate and vegetation shifts, Munoz and his colleagues report online today in the Proceedings of the National Academy of Sciences.

The authors don't claim that climate change directly drove cultural change, but they do argue that prehistoric humans periodically "adjusted their tool kits" in response to climate changes.

Munoz says that only future research in more regions, along with closer study of individual archaeological sites, will enable researchers to pinpoint just how climate caused cultural changes. And he cites the recent fluted-point study as an important step in that direction.

Bryan Shuman, a paleoclimatologist at the University of Wyoming in Laramie and a co-author on the fluted-point study, says the correlations in the new study are "striking," adding that "the major cultural transitions happen right when the major climate and ecological transitions take place." He agrees with Munoz that further work is needed to investigate just how prehistoric humans adapted to those transitions.

But Anthony Brown, a paleoenvironmentalist at the University of Southampton in the United Kingdom, cautions that the cultural periods used in the study might not have been accurately identified. Often, Brown says, archaeologists excavating sites with few cultural artifacts use radiocarbon dates to guess which culture they are dealing with, thus creating a "circular process" that could make the team's attempts to correlate culture and climate "problematic."