Ur (Irak) : The story behind the world’s oldest museum Part.1

The story behind the world’s oldest museum, built by a Babylonian princess 2,500 years ago

In 1925, archaeologist Leonard Woolley discovered a curious collection of artifacts while excavating a Babylonian palace. They were from many different times and places, and yet they were neatly organized and even labeled. Woolley had discovered the world's first museum. 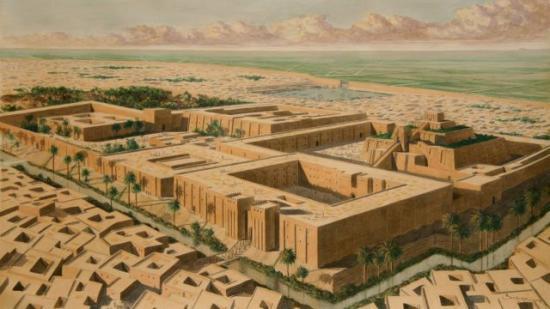 It's easy to forget that ancient peoples also studied history - Babylonians who lived 2,500 years ago were able to look back on millennia of previous human experience. That's part of what makes the museum of Princess Ennigaldi so remarkable. Her collection contained wonders and artifacts as ancient to her as the fall of the Roman Empire is to us. But it's also a grim symbol of a dying civilization consumed by its own vast history.

Ennigaldi's museum was just one of many remarkable finds made by Leonard Woolley, generally considered to be among the first of the modern archaeologists. Born in London in 1880, Woolley studied at Oxford before becoming the assistant keeper at the school's Ashmolean Museum. It was there that Arthur Evans - himself a renowned archaeologist for his work with the Minoan civilization on the Greek island of Crete - decided that Woolley would be of more use out in the field, and so Evans sent him to Rome to begin his excavating career. 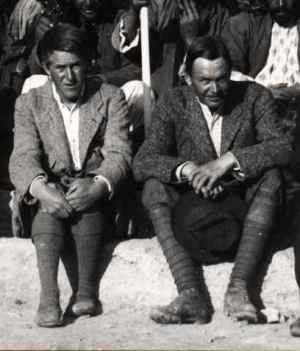 Although Woolley had a longstanding interest in excavation, he had little or no formal training in how to actually go about doing it. He would be left to teach himself on the job, and many of the techniques and approaches he came up with would prove hugely influential to future archaeologists. Just before the outbreak of World War I, he excavated the ancient Hittite city of Carchemish alongside his younger colleague T.E. Lawrence, who would soon cast aside his archaeological career for his more famous role as...well, as Lawrence of Arabia. You can see the two together in the photo on the left.

But it was Woolley's work in the ancient Mesopotamian city of Ur that would really cement his legacy. Beginning in 1922, Woolley excavated huge swaths of an ancient city-state that had endured for thousands of years, from the ancient Sumerian civilization of 3000 BCE to the Neo-Babylonian Empire of 500 BCE. One of his biggest discoveries - you might call it the Sumerian equivalent of King Tut's tomb - was the tomb of Shubad, a woman of great importance in 27th century Sumer whose tomb had remained undisturbed through the ensuing 4,600 years.

However, it was the discovery of something from the very end of Ur's existence that interests us in this particular case. And for that, we might as well go straight to the words of Leonard Woolley himself. 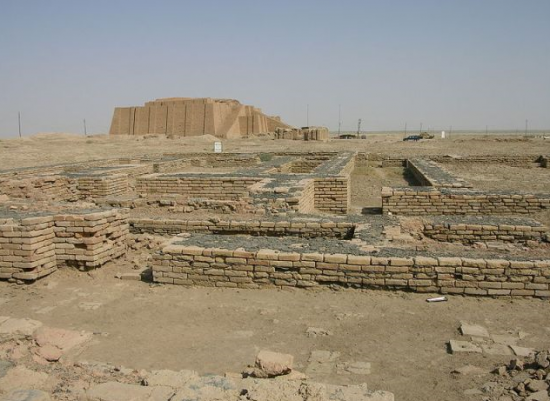 In his book Ur of the Chaldees, Woolley recounts his excavations of a palace complex in Ur. This particular palace dated to the very end of the city-state's long history, right before the absorption of its territories into the Persian Empire and the eventual abandonment of the city around 500 BCE. This was the time of the Neo-Babylonian Empire, and while Babylon was (unsurprisingly) the capital of this empire, the now ancient city of Ur was still important both for its strategic location near the Persian Gulf and for its legacy as a once great power.

As Woolley explains in his book, he and his team were quite confident that they were excavating Ur from its latest period, which is why the artifacts they found in one particular chamber (a photo of which is on the left) made so little sense:

Suddenly the workmen brought to light a large oval-topped black stone whose top was covered with carvings in relief and its sides with inscriptions; it was a boundary-stone recording the position and the outlines of a landed property, with a statement as to how it came legally into the owner's hands and a terrific curse on whosoever should remove his neighbor's landmark or deface or destroy the record.

Now, this stone belonged to the Kassite period of about 1400 BC Almost touching it was a fragment of a statue, a bit of the arm of a human figure on which was an inscription, and the fragment had been carefully trimmed so as to make it look neat and to preserve the writing; and the name on the statue was that of Dungi, who was king of Ur in 2058 BC. Then came a clay foundation-cone of a Larsa king of about 1700 BC, then a few clay tablets of about the same date, and a large votive stone mace-head which was uninscribed but may well have been more ancient by five hundred years.

What were we to think? Here were half a dozen diverse objects found lying on an unbroken brick pavement of the sixth century BC, yet the newest of them was seven hundred years older than the pavement and the earliest perhaps sixteen hundred.

In this single room, Woolley had discovered at least 1,500 years of history all jumbled together, a bit like if you randomly found a Roman statue and a piece of medieval masonry while cleaning out your closet. Left to their own devices, these objects would never be found together like this. Somebody had messed around with these artifacts - they just couldn't have guessed how long ago and to what purpose that tampering took place. 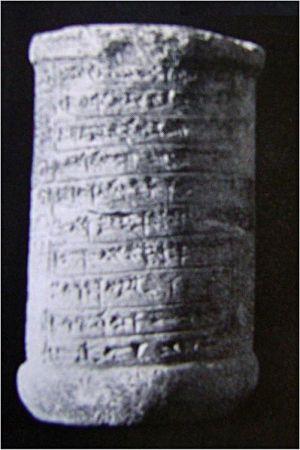 It quickly dawned on Woolley that this might actually be an ancient museum, the 6th century BCE equivalent of the sorts of institutions that were now sponsoring him. Indeed, a key piece of evidence was how the artifacts were arranged - while they were all mixed up from a temporal perspective, whoever had brought these items together had done so with considerable care and attention.

What sealed the deal was the discovery of the world's earliest known museum label. In his book, Woolley describes finding clay cylinders in the chamber, each with text written in three different languages, including the language of ancient Sumerian and the more modern (for the period) late Semitic language. He quotes one of these descriptions, along with a rather wry appraisal of what was said:

"These," it said, "are copies from bricks found in the ruins of Ur, the work of Bur-Sin king of Ur, which while searching for the ground-plan [of the temple] the Governor of Ur found, and I saw and wrote out for the marvel of beholders."

The scribe, alas! was not so learned as he wished to appear, for his copies are so full of blunders as to be almost unintelligible, but he had doubtless done his best, and he certainly had given us the explanation we wanted. The room was a museum of local antiquities...and in the collection was this clay drum, the earliest museum label known, drawn up a hundred years before and kept, presumably together with the original bricks, as a record of the first scientific excavations at Ur.

Sure, Woolley didn't think much of the scribe's attention to detail. But he was man enough to admit when he had been beaten to the punch - and in this case, he readily acknowledged that archaeology in Ur had been thriving about 2,500 years before he had ever set foot there. And, even more remarkably, this most ancient museum predated the first modern museums by about two millenniums.