Ur (Irak) : Lyre found in the 'Great Death-Pit' 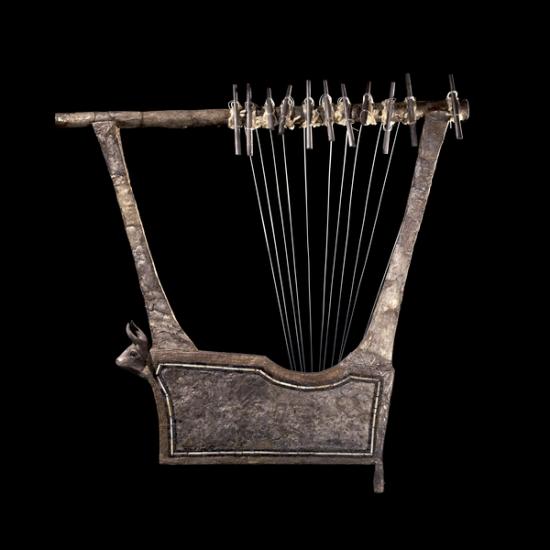 This lyre was found in the 'Great Death-Pit', one of the graves in the Royal Cemetery at Ur. The burial in the Great Death-Pit was accompanied by seventy-four bodies - six men and sixty-eight women -laid down in rows on the floor of the pit. Three lyres were piled one on top of another. They were all made from wood which had decayed by the time they were excavated, but two of them, of which this is one, were entirely covered in sheet silver attached by small silver nails. The plaques down the front of the sounding box are made of shell. The silver cow's head decorating the front has inlaid eyes of shell and lapis lazuli. The edges of the sound box have a narrow border of shell and lapis lazuli inlay.

When found, the lyre lay in the soil. The metal was very brittle and the uprights were squashed flat. First it was photographed, and then covered in wax and waxed cloth to hold it together for lifting. The silver on the top and back edge of the sounding box had been destroyed. Some of the silver preserved the impression of matting on which it must have originally lain. Eleven silver tubes acted as the tuning pegs. 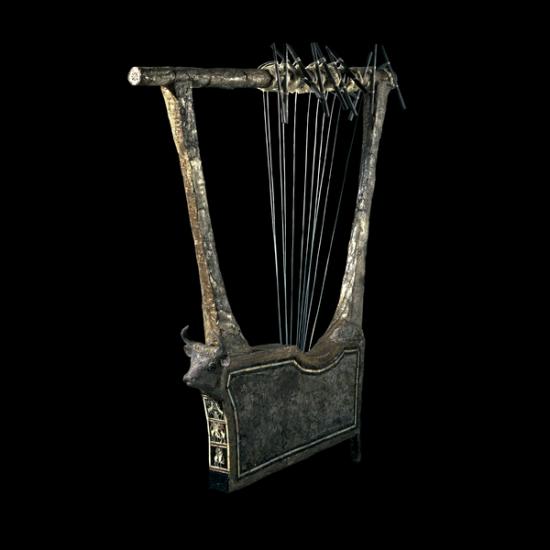 Such instruments were probably important parts of rituals at court and temple. There are representations of lyre players and their instruments on cylinder seals, and on the Standard of Ur being played alongside a possible singer.

C.L. Woolley and others, Ur Excavations, vol. II: The R(London, The British Museum Press, 1934)