Excavations from Israel over the past 50 years suggest that synagogues may be older than we initially thought. 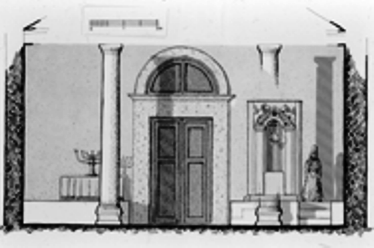 Jerusalem-facing wall at Nabratein in Galilee with Torah shrine at right.

The discovery of the Byzantine-period synagogue at Beit Alpha with its wonderful zodiac mosaic and naïve artistic style, and its subsequent excavation by Eliezer Lipa Sukenik, father of Yigael Yadin, in 1929 put synagogue archaeology on the map.

While some work on synagogues was carried out between World War I and World War II, it was not until the State of Israel was established in 1948, and especially after 1967, that the study of ancient synagogues took off. The work of our Duke University team began in 1970 with the excavation of Khirbet Shema in Upper Galilee under the sponsorship of the Smithsonian Institution and the American Schools of Oriental Research (ASOR). The site had drawn scant notice in the 19th century Survey of Western Palestine and the synagogue plan revealed during the course of three seasons of work proved to be a major turning point in our understanding of the evolution of the synagogue after 70 CE. Constructed in the third century CE, it was a basilica structure with eight columns that was seemingly oriented to the east, but with a bima or raised platform in the middle of the southern, long wall. This meant that it was a hybrid structure, because the bima indicated that the Torah was read on the long wall, rather than on the short wall at the end of the basilica. While the sight lines were not great because of the columns, it was indisputable that this was the first known hybrid synagogue with internal columniation ever found in the Land of Israel.

Just 10 years later our team uncovered a second century CE hybrid synagogue at nearby Nabratein oriented towards Jerusalem on its long, southern wall; in its third-century stage it had a beautiful Torah shrine with decorative rampant lions on the pediment that adorned its top.

Up until these several discoveries scholars had thought that the bima and Torah shrine had not been introduced to the synagogue until after the rise of imperial Christianity in the fourth century CE. In other words, new excavations after the Six-Day War, not only in the Galilee but in the Golan Heights as well, demonstrated that local custom and topography as well as the preferences of the local Jewish leadership dictated the type of synagogue building that was to be selected. Also part of the older view was that the colorful mosaics that we know from so many ancient synagogues did not emerge until the fourth century or later. The recent excavation of the synagogue in the Wadi Hamam near the western shore of the Sea of Galilee, near Magdala, however, has shown that even such mosaics originated earlier.

Recently the study of ancient synagogues has entered a period of considerable contention over several issues. First is the question of the pre-70 CE Second Temple synagogue and whether there were any synagogues in the period immediately after the destruction of the Second Temple in 70 CE. In regard to the pre-70 synagogue the recent discovery of the first-century synagogue at Magdala with a plain mosaic floor and frescoed walls, along with other structures at Masada, Herodium, Qiryat Sepher, Hovat Ethri, Modiin, etc., make it absolutely certain that there were synagogues in the time when the Temple still stood.

The debate now is focused on whether the temples at this time were a venue for private prayer along with the reading of Torah. The well-known first-century Theodotus inscription from Jerusalem shows how important reading of Torah was but it also suggests that the early synagogues also served as guesthouses and places of purification.

In my view, the dearth of evidence for archaeological remains of synagogues immediately after 70 CE must be understood in light of several very important considerations. First and foremost is the fact that the construction or expansion of synagogues in the later periods, whether late Roman (third and fourth century CE) or Byzantine (late fourth through sixth century CE), meant that the earlier edifices were destroyed or incorporated in the later ones. Also, the prohibition on building new synagogues in the later Byzantine period would account for the increased use of older architectural fragments in the refurbishing of older buildings, which was permitted.

Whatever the case may be, the emergence of synagogue liturgy in the second and third centuries CE and references in Tannaitic literature to features of synagogue buildings makes such claims very difficult if not impossible to sustain. As synagogues evolved in this period they assumed more and more of the sacred activities associated with the Temple

One of the more important and sensitive historical issues that has emerged in the course of this debate, based to a large degree on the paucity of synagogue remains post-70, is the degree to which classical Judaism arose in response to Christianity or the degree to which the tragedy of the two wars with Rome (66-70, 132-135 CE) led the Jewish people to re-evaluate their tradition and successfully reinterpret it within the changed circumstances of two crushing defeats.

In my view this period in the history of Judaism was as definitive as the period after the destruction of the First Temple in 586 BCE when the exiled Judeans not only survived but managed to pray without the Temple and began the task of editing the books of Scripture that would help them maintain their identity and keep the traditions of former times. The first centuries after 70 CE also led to publication of the Mishnah by 200 CE and many of the early biblical commentaries. It is unimaginable that all of this literary creativity, along with the development of the synagogue liturgy, could have happened without a physical setting in which it could take shape. The most logical setting is the synagogue as a structure where the Torah was read, translated and interpreted; where homilies were given; and where the liturgy was sung and recited.

The tendency in recent years to date or redate most synagogues to the fourth through sixth centuries CE, in my view, is misguided. The dearth of well-preserved physical evidence for Roman-period synagogues does not eliminate the possibility that some large houses in some communities could have been used for communal gatherings and liturgical purposes also. The first pulpit in which I served as High Holiday cantor, in Pelham, N.Y., was a lovely old Victorian house; it had a sense of intimacy and warmth that few large synagogues can replicate.

In ancient Palestine the character of the synagogue was overwhelmingly classical in expression. With the basilica style predominant, and with its modified Doric capitals on the internal columns, or Syrian gable above the lintel on the facade, the feeling of the buildings was Greco-Roman. This is not surprising in light of the fact that since at least the fourth century BCE, Greek culture had been infiltrating the local scene. When combined with Roman influence in the first century BCE it remained a dominant combination of classical influence till the dawn of the Middle Ages. In the Byzantine period an apse was frequently added to many synagogue structures along with a chancel screen that separated the seating in the apse. Benches would have lined the sides of the synagogue in all periods and many individuals would have simply sat on the floor. Until the early medieval period there is no real support for understanding the gallery in some buildings as set aside for the seating of women.

The most common symbols that we find in the ancient synagogue on carved stone and in mosaics are the menorah, Ark, the lulav, etrog and incense shovel — and on some mosaics we even find the zodiac. Apparently the rabbis were quite at home with art of all kind.

The synagogue is surely one of the most important contributions of the Jewish people to the world but especially to the people who revere the holy word in Scripture. We may see the influence of the synagogue most clearly in the evolution of the church and mosque where Scripture is read in elevated position to this day to emphasize the power of the Word in the lives of the people who revere it. For the Jewish people in particular, the synagogue became the vehicle par excellence that carried forward the holiness of the Temple and which made it possible for Jews anywhere to encounter God’s presence in word and spirit.

Eric M. Meyers is Bernice and Morton Lerner professor of Jewish studies at Duke University and director of the Center for Jewish Studies there. He has directed digs in Israel and Italy for more than 40 years and was president of the American Schools of Oriental Research for three terms. He is currently at work on the final reports of his work at Sepphoris in the Galilee.