Like the city of Pompeii was at once destroyed and preserved by the volcanic ash that settled upon it from the violent eruption of nearby Mt. Vesuvius in the year 79 CE, the village of Kantur on the Golan Heights was both destroyed and preserved by a massive earthquake nearly 700 years later. The site of Kantur – also called “Um el Kanatir” – was destroyed in a massive earthquake in January 749 CE that struck what it modern day Israel. However due to a combination of factors, the town remained largely intact. Stephen Rubin describes some of those factors in Discovering Jewish History on the Golan Heights, in the April 2014 issue of The Tower Magazine.

Although the site appears relatively small compared to the cities destroyed by the great earthquake of 749—it encompasses just 7.5 acres—Umm el Kanatir is a researcher’s paradise due to its wealth of aboveground archaeological evidence, visible to the naked eye and dating primarily to a single period. It is almost as if someone pulled a tablecloth out from under a full dinner spread with the wine glasses falling like dominos. This is not the only thing that makes the site so unique. The much larger city of Beit Shean, for example, collapsed in similar fashion and offers a larger variety of archaeological remains. In Umm el Kanatir, however, unlike almost anywhere else, it is possible to reconstruct nearly 100 percent of the village’s central structure, using the original, basalt-hewn stone blocks to do so. 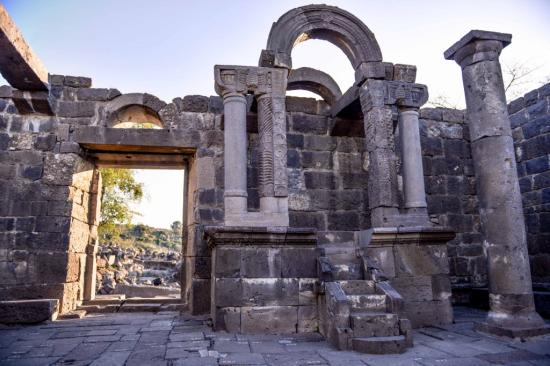 In addition, because the area of Kantur is located in “the barren and mostly infertile landscape around the Samach Canyon” meant that there was “minimal generational settlement” in the area resulting in the blocks of Kantur’s buildings remaining mostly “untouched since 749.” At the center of the effort to reconstruct Kantur is an “unoffiicial” archaeologist by the name of Yeshua Dray. Dray, who is an interior designer by trade, has a unique approach to ruins. He sees his approach of restoring ruins in contrast to the more standard approach to archaeology, “This restoration technique is a preservation tool which is the opposite of archaeological exploration. While archaeology tries to recreate and understand history, it also destroys it at the same time.” Dray started restoring Kantur nearly twenty years ago at the invitation of Dr. Haim Ben-David. Though they were not the first archaeologists to study the ruins they were able to prove that the central structure of the ruins was a synagogue, proving the conjecture of an archaeologist who had surveyed the site in the late 19th century. If the town, including the synagogue was reconstructed using the local basalt blocks, the basins by the stream made of limestone and chalk explain a different aspect of the village. Remnants of flax in these basins tell of a textile industry based in Kantur. Those who lived in the village produced white linen for burial shrouds and holiday clothing. They likely also trade their fabric to nearby non-Jewish villages. When the earthquake struck the Golan in 749 CE it preserved the evidence of the commercial and religious lives of Kantur’s inhabitants. Now using his unique approach to archaeology, Yeshua Dray is putting the pieces of the historical puzzle back together.