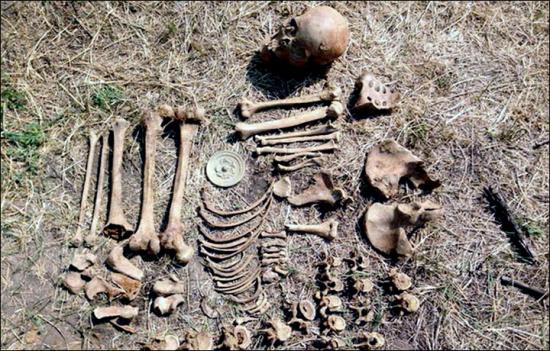 'It was the remains of a Mongoloid woman of about 30 years old, perhaps one of our ancestors.' Picture: Dmitry Stolyarov/Interior Ministry of Buryatia

Natalia Filina, 31, and her husband were digging in their garden when they hit stones. 'I wish I could find buried treasure,' he said, when amongst the stones they found bones at a depth of around 60 centimetres.

At first they thought these were chicken remains, but then Natalia said: 'This is very similar to someone's legs...'. She said: 'At this moment we stopped digging and called the police.'

In the hole they were digging as a compost pit, they found not only a skeleton but also a bronze mirror some 9.9 centimetres in diameter and 0.5cm thick. Police called in the Institute of Mongolian, Buddhist and Tibetan Studies in Ulan-Ude, and experts found additional remains. 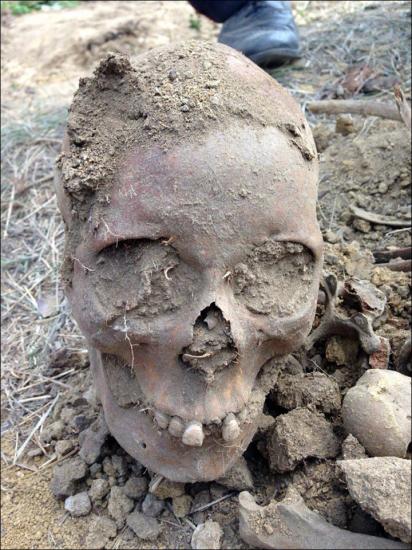 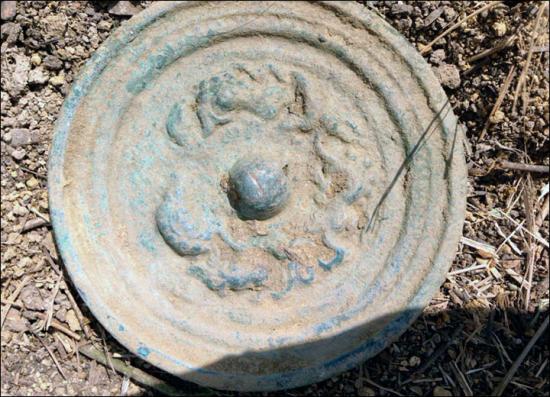 In the hole they were digging as a compost pit, they found not only a skeleton but also a bronze mirror some 9.9 centimetres in diameter and 0.5cm thick. Pictures: Dmitry Stolyarov/Interior Ministry of Buryatia

'The study showed that it was the remains of a Mongoloid woman of about 30 years old, perhaps one of our ancestors,' said research fellow Dr Alexey Buraev. 'It is impossible to determine from the bones what caused her death. There are no life-threatening traumas, and so no conclusions can be drawn. But for those times 30 years - this was rather an advanced age.'

The medieval woman was lying in a wooden coffin made of log, covered with birch bark. The bronze mirror is believed to date to the 10th to 13th centuries, which perhaps indicates the age of the burial. Detailed tests will be carried out to determine when she lived.

Experts say the mirror is from China, and on one side are visible two dragons and an inscription which it is hoped to decipher. The woman evidently had high status in her society.

'Bronze mirrors are quite rare in archaeological excavations and are unique works of art that characterise the skill of those who make them, and their beliefs,' said Bilikto Bazarov, another research fellow at the institute, which is part of the Siberian Branch of the Russian Academy of Science.

'We think that the mirror can indicate that the burial was not later than the 13th century and we plan to clarify the date after radiocarbon analysis of the birch bark and remains of the coffin.'