Tattooed 2,500-year-old princess found mummified and preserved in permafrost could finally be reburied in special monument.

Plans have been put forward to build a permanent monument and final resting place for the ice maiden, who was uncovered by archaeologists in 1993. Picture: Spiritual Centre of the Turks Kin Altai

A tattooed Siberian princess found mummified and preserved after almost 2,500 years in permafrost is set to be buried in her own special mausoleum. Plans have been put forward to build a permanent monument and final resting place for the ice maiden, who was uncovered by archaeologists in 1993.

Known as Princess Ukok, after the high altitude plateau on which she was discovered, her body was decorated in the best-preserved, and most elaborate, ancient art ever found.

She spent most of the past two decades at a scientific institute in Novosibirsk, and is now at the Republican National Museum in Gorno-Altaisk, sparking anger among the local people in the Altai Mountain region who want her re-buried.

Ancient beliefs dictate that her presence in the burial chamber had been to 'bar the entrance to the kingdom of the dead'. Elders insisted that removing the mummified remains meant this doorway to the other world is now open and that her anger has already caused a series of floods and earthquakes. But now the revered princess could finally be repatriated to her original resting place in the Ukok plateau, with a beautiful mausoleum built on top.

The first sketches of the plans were presented by Akai Kine, the zaisan (leader) of the Teles ethnic group, and president of the Spiritual Centre of the Turks Kin Altai.

He said: 'According to the drafts, the mummy will be put in her original resting place, and on the top will be build funerary monument. The mausoleum will be located on the Ukok plateau in the place where the mummy was found by archaeologists in 1993.

'These are the first options for the future mausoleum. Publishing them, we want to start a public discussion in the media. There is no State decision on reburial of the Princess. But we have the main thing - we believe that this revered woman will be reburied.

'At one point, few people believed the princess to come back into the Altai Republic. Nevertheless, it that happened.'

The mummy was excavated by Novosibirsk scientist Natalia Polosmak and was heralded as 'one of the most significant archaeological discoveries of the 20th century'.

Thought to be about 27 years old when she died, she was found preserved in permafrost at an altitude of about 2,500 metres, with two men also discovered nearby. Buried around her were six horses, saddled and bridled and said to have been her spiritual escorts to the next world, along with a meal of sheep and horse meat.

Archaeologists also found ornaments made from felt, wood, bronze and gold as well as a small container of cannabis and a stone plate on which coriander seeds were burned. From her clothes and possessions including a 'cosmetics bag', scientists were able to recreate her fashion and beauty secrets.

She was dressed in a long shirt made from Chinese silk, and had long felt sleeve boots with a beautiful decoration on them. At this time Chinese silk was only ever found in royal burials of the Pazyrk people, and since it was more expensive than gold it gave an indication of her wealth and status. 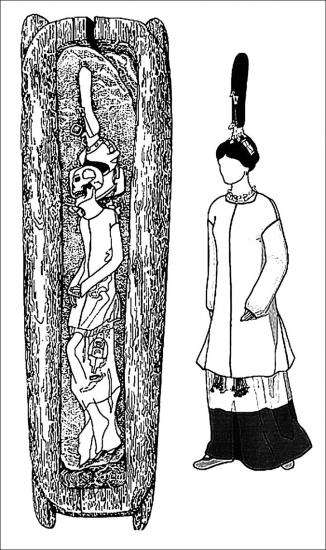 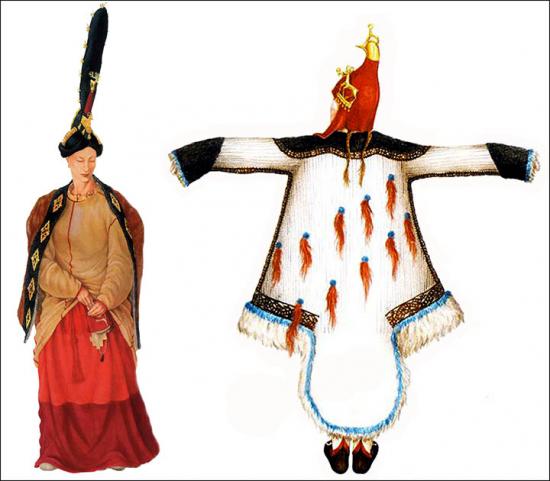 Scheme of the burial and reconstructions of Pazyryk woman's and man's costumes, reconstruction by D. Pozdnyakov, Institute of Archeology and Ethnography, Siberian Branch of Russian Academy of Science; sculptor's impression of how Princess Ukok looked 2,500 years ago

Her head was completely shaved, and she wore a horse hair wig on top of which was a carving of a wooden deer.

The princess's face and neck skin was not preserved, but the skin of her left arm survived. But the most exciting discovery was her elaborate body art, which many observers said bore striking similarities to modern-day tattoos.

On her left shoulder was a fantastical mythological animal made up of a deer with a griffon’s beak and a Capricorn’s antlers. The antlers themselves were decorated with the heads of griffons. The mouth of a spotted panther with a long tail could also be seen, and she had a deer’s head on her wrist.

Elders in the Altai Mountains have long called for the mummified remains to be reinterred to 'stop her anger which causes floods and earthquakes'. They insisted that the worst flooding in 50 years in Altai and a series of earthquakes were caused by the dead princess.

She is believed to have been between 25 and 28 years old and about 1.62 metres tall. Her remains have been treated by the same scientists in Moscow who preserved the body of former Soviet leader Vladimir Lenin. 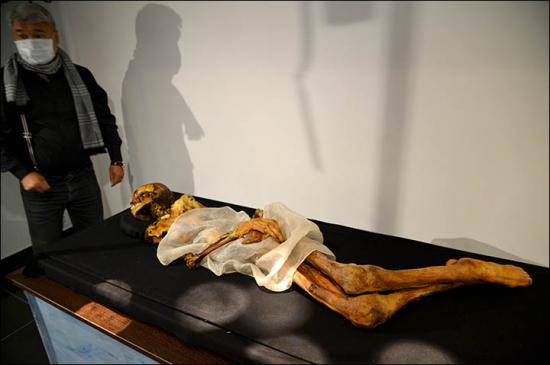