Why Uffington White Horse is really a dog, says vet. 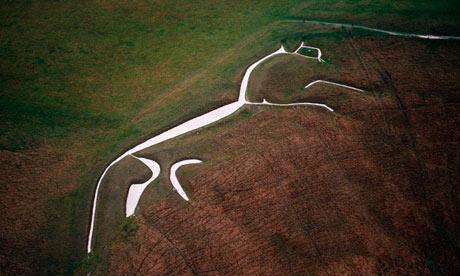 The famous White Horse of Uffington, carved into the hillside above the Oxfordshire village and thought to be 3,000 years old, may not have been intended to be a horse at all, according to a retired vet.

In a letter to the Veterinary Record, Olaf Swarbrick, of West Sussex, said the features of the 360ft by 130ft chalk animal, made it look more like a greyhound.

But last night Uffington residents roundly dismissed the claims about the landmark, thought to date back to 1250BC.

In his letter Mr Swarbrick wrote: “Looking at it again, it seems that it is not a horse at all.

“The tail and head are wrong for a horse and more suggestive of a dog.

“It appears more like a large hound at full stretch.

“I thought it may be a greyhound, but an anthropologist suggests it is a wolfhound, which, assuming it is not a horse, makes more sense.”

There have been many theories surrounding the White Horse including one that it is a dragon, due to its proximity to Dragon Hill, where, legend has it, Saint George killed the mythical dragon.

But Graham Banks, chairman of Uffington Parish Council, said: “I’m sure that in the 3,000 years the horse has been here it has been called many different things. But we are very happy with our horse, and we are very proud of it. The horse will be staying.”

Lynn McAuliffe, landlady of the White Horse pub, in nearby Woolstone, said about 250,000 people came to look at the landmark every year.

She said: “I don’t think as many would come if they thought they were coming to look at a dog.

“People are very fond of the horse.

“Often people will come into the pub who have met their partners at the Horse and come back every year for their anniversary. People have taken it to their hearts.”

Resident Jane Cooper said the figure was typical of the Scandinavian style of horses being drawn in the period.

She said: “I live close to the hill and when I look out of my window I definitely see a horse, not a dog.

“People are entitled to their imaginations, but it’s ridiculous.”