A badger has led German archaeologists to a stunning find of medieval warrior graves, complete with one skeleton still clutching a sword and a wearing snake-shaped buckle on his belt.

The warrior complete with sword and bowl. Photo: Felix Biermann

A reconstruction of how he may have looked when buried. Photo: Ottilie Blum

Scientists are now examining the burial site where at least eight people were buried.

Artist and voluntary monument maintenance man Lars Wilhelm said he was watching badgers near his home in Brandenburg, north Germany, when he realized they were digging into an ancient grave.

He said he had been watching the progress of an enormous badger sett for five years. "My wife and I - we are both sculptors - wanted to put artworks in there."

But this was now out of the question, he said. "The bones changed everything," he added. 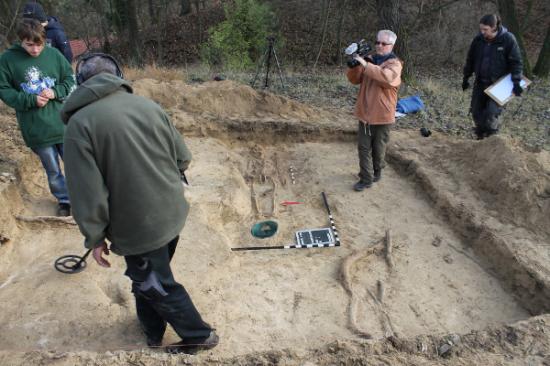 The Berliner Zeitung newspaper said Wilhelm called the experts as soon as he realized the animals had dug up bones. Archaeologists moved in and expanded the work of the badgers, freeing up eight graves, two of which were of noblemen.

"These are late Slavish graves," said Professor Felix Biermann from the Ernst-August University in Göttingen, who is leading the dig in the Uckermark Stolpe area. He said they dated from the first half of the 12th century AD.

"Apart from these last heathen Slavs, the whole surrounding area was already Christianized. It's special because these rulers still had their independent heathen beliefs."

The warrior graves were particularly exciting. The skeleton of one man, aged around 40, was complete with a two-edged sword, and a bronze bowl at his feet.

"At the time such bowls were used to wet the hands before eating," said Biermann. "The bowls would a sign that a man belonged to the upper classes."

He added that the warrior also had a bronze buckle with a snake's head, which probably came from Scandinavia. His grave also contained an arrow head.

"He was a well-equipped warrior. Scars and bone-breaks show that he had been hit by lances and swords, and had also fallen from a horse."

The second warrior grave had already been robbed - although in another, the skeleton of a woman was found to have a coin in the mouth. "The belief at the time was that this was for the ferryman to cross over into the realm of the dead," said Biermann.

The Stolpe castle area where the graves were found   Photo: Felix Biermann