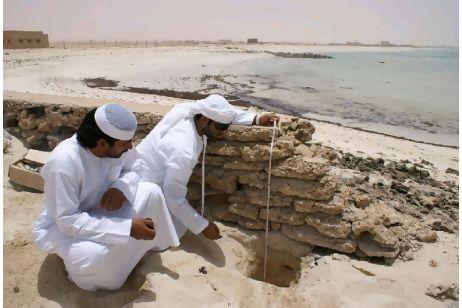 An ancient harbour discovered near where the UAE's first nuclear plant will be constructed is just one of many treasures providing crucial clues to the country's past, a conference heard yesterday.

The harbour, located in Sag Barakah in Al Gharbia, is made up of two parallel rock walls that extend like a pier out into the sea. The exposed part is more than 1.5 metres high and 100 metres long.

The structure was discovered in 2008 by Dr Mark Beech, the cultural landscapes manager of the Historic Environment Department at Abu Dhabi Authority for Culture and Heritage (Adach).

A team from the department were conducting a "preliminary cultural review" of the area, checking for possible archaeological sites before giving clearance for development to take place.

"We don't know much about its age and its story, but there is a story passed down through the great-grandfathers of the area that camels used to bring water to the spot for the pearling boats," Dr Beech said.

A well is believed to exist in the Barakah area, near the find, but has yet to be excavated.

In the past two years, the Adach teams also discovered two Neolithic flint sites, one at Sila and the other at Al Faya Industrial City. This month, a water channel system, a falaj, was uncovered in the district known as falaj Hazza, in Al Ain. This site has yet to be fully investigated.

"There are constantly new sites being discovered in the UAE," Dr Beech said. He was one of 25 archaeologists presenting their research to the two-day conference at the Hilton Hotel in Al Ain organised by Adach's Historic Environment Department.

Regardless of the time period they were researching, each of the experts was adamant about the importance of their discoveries to understanding the UAE's past, and its role in the bigger historic picture.

"The discovery of Palaeolithic stone tools in the UAE supports the hypothesis that earliest man took a southern migration out of Africa and across the Arabian Peninsula, passing through the UAE, on to Iran, then to Asia and the rest of the continent," said Dr Julie Scott Jackson, from the Institute of Archaeology at the University of Oxford. "Not just a northern route out of Africa through the Levant countries, as initially thought."

She was presenting her case for the importance of studying the early periods of the stone age in the UAE, with many Palaeolithic sites already lost to development. "Evidence of Palaeolithic occupation in the UAE is slowly being lost forever," she said.

Some papers caused heated debates among the researchers, such as an argument presented by a team excavating the Wadi Suq enclave in the Northern Emirates.

They believe the area became "relatively high population density", prompting migration for its superior subterranean water reserves. Initially it was thought there was a decline in the level of settlement in the Wadi Suq period, 2000BC to 1700BC.

"When the rest of the UAE and Oman were struggling with a major drought and their population was going down, the Northern Emirates' population survived and maintained a normal level," said Dr Christian Velde, from the National Museum of Ras al Khaimah, one of the team members who presented this paper.

Whether the experts were talking about pottery shapes or rock art, all but one agreed on the common enemy of development. Prof Adrian Parker, the lone dissenter from Oxford Brookes University, said: "I love the sight of quarries, as they dig up sand dunes and expose what is inside and under them for me to study."

For the past 15 years, Prof Parker has been studying sand dunes and desert terrain to draw a picture of the UAE's past climate and its impact on settlements and occupations.

"The density of human occupation of an area is often dependent on the level of water availability there," he said. "During periods of drought, they simply died off or were forced to move out to find wetter areas elsewhere, if they could."

During the period between 8,000 and 6,000 years ago, the UAE's harshest terrains were green and abundant. The desert landscape would have been covered in lush grassland with numerous lakes scattered across the interior of the country.

Bones of animals, particularly Arabian camels, were found scattered along a dried-up lake in Baynunah, located in Al Gharbia. It is believed they started to die off during a major drought about 6000 years ago, where they would travel over long distances to reach the lake, only to find the water gone. "In another 5,000 years, we can expect it to become green again," Prof Parker said.

All the papers presented at the conference will be published in a special edition of the Archaeology of the United Arab Emirates journal, which ceased publication 22 years ago. The previous issues of the journal, from 1976 to 1989, are now available online on the Adach website.