Vanished cities abound in Iraq —Babylon, Nineveh and Ur just for starters — so much that archaeologists joked that the only advice needed to uncover history is "just dig." 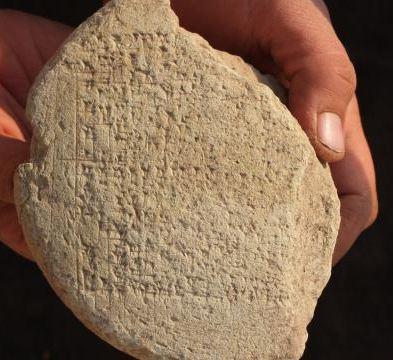 SOURCE: Stony Brook (N.Y) University  - A cuneiform inscription on a ceremonial clay nail dating to 1800 BC from the surface at Sakhariya.

War and international sanctions closed these locations off to the world and to scholars. The ruins of ancient Mesopotamia, in modern-day Iraq, have mostly seen visits from looters for the last two decades.

But that may be changing. A U.S. archaeology team that was one of the first to visit Iraq in more than two decades, has just returned from a dig there. They are now among a growing list of other archaeologists returning to the war-ravaged nations.

"There is so much gloom and doom in news from Iraq, this is a really hopeful moment," says archaeologist Elizabeth Stone of Stony Brook (N.Y) University. "Iraq, Mesopotamia, is so rich in archaeological sites. It was wonderful to be back."

Stone spent Christmas in southern Iraq on a dig project co-headed by colleague, Paul Zimansky. Their four-week visit marked the first U.S. archaeological efforts in the country outside of Kurdish regions in two decades, since the 1990 Gulf War, and one of the first foreign efforts in a decade as well.

"Things are better now and there was real interest among Iraqi scholars and officials in resuming archaeological work there," Stone says. By design, her team started small on a four-week winter break between classes. Instead of a city, they hoped to find an ancient village at a site called Tell Sakhariya, near the southern Iraq city of Nasiriyah, and about four miles from the ancient ruins of Ur, the fabled birthplace of Abraham in the Old Testament.

"As the last U.S. convoy was leaving (on Dec. 17) we were headed into Iraq, which was a fitting moment," says Stone, who had last worked inside Iraq on projects such as excavations of the ancient Babylonian city of Mashkan-shapir in 1990. "The soldiers were leaving and the archaeologists were returning."

Archaeologists already know a lot about ancient Mesopatamia, the "land between the rivers" the Tigris and Euphrates, as it was known to the ancient Greeks. Sumerian kings ruled the nearby city of Ur, once on the banks of the Euphrates (which has since shifted its course) around 3000 to 2000 B.C. At the Tell Sakhariya site, the team dug trenches to find the history of the site, which satellite photos had suggested was a small place. "We have lots of cities, but not a lot of villages," Stone says. "And not a lot of time, so we needed to start small."

For her National Geographic Society-funded team, "small" was a square football-field sized mound, or tell, the giveaway for an ancient settlement site built of crumbled brick and pottery. Instead of a village, though, the digging at first revealed an encampment for herders who flourished in the region after 1800 B.C., when a dynasty of kings fell with nearby Ur. Cow and fish bones were found in hearths there, left just like marsh herders today leave them in the region.

Satellite images suggested a "fortress" remained even lower down, based on what looked like the outline of walls. The archaeologists dug five test pits across what they thought were walls and kitchens. But it turned out the "fortress" walls were just salt-soaked depressions, fooling the researchers.

"Instead we found burials," of what seem like infants, Stone says, and the clay edges of a platform more than 80 yards across.

What else did they find? Among the discoveries were parts of inscriptions on 10 clay bricks and markers found at the platform level. They suggest a ceremonial platform built by the kings of Ur around 2000 B.C. At the time, Ur was one of the largest cities of the world, with tens of thousands of citizens, great record-keepers of ancient days who marked cuneiform symbols in mud bricks to record their business dealings. Which is why we know so much about them, now.

"It's very tentative, but the site may be Ga'esh, a place where Ur's kings went every year for a festival renewing their rulership," Stone says. The claim has competition from an Italian team now investigating another nearby site in the region, she adds.

"Hopefully, things will remain stable and people will be able to go back," she says. Archaeology in Iraq remains difficult, she acknowledges. The dig was only possible because the site was near an airbase in a guarded region of one of the quieter parts of the troubled country.

For an encore, Stone and her colleagues, have requested permission to investigate Ur itself, first heavily excavated by British archaeologist Sir Charles Leonard Woolley. He uncovered royal tombs at Ur dating back to around 2600 BC, in digs during the 1920's and 1930's, at the behest of the British Museum and the University of Pennsylvania, which still hold some of his discoveries. Discovery of the intact tomb of "Queen" Puabi, buried with 52 poisoned attendants and gold adornments, that included a headdress now displayed at the British Museum, made Ur world-famous and once a great site for tourism.

"Woolley was very good for his time, but he didn't have the methods we have now," Stone says. "And he was paid to find items, honestly." Instead she hopes that a search through smaller houses will reveal more about the lives of people living in some of the world's first cities in one of the early moments of civilization.

"These people kept private records, still in their houses," she says. "And you look under the floors, and there are burials. It is the complete package for archaeology." After waiting 20 years to return, Stone says, "We're very hopeful we can return again."