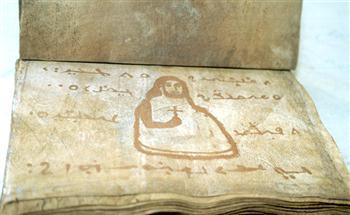 An early copy of the Bible seized in Gaziantep in 2001 was claimed to be written by John the Apostle. Hürriyet photo

A centuries-old copy of the Bible that contains early teachings of Jesus Christ has been in the Turkish state's possession for the past 12 years, daily Bugün reported today.

The Vatican reportedly placed an official request to examine the scripture, which was written on pages made of animal hide in the Aramaic language using the Syriac alphabet.

The book was seized by the police from a smuggling gang in 2000 in Turkey's Mediterranean region and since placed in Ankara's Justice Hall. There, it waited for eight years before being transferred to the Ethnography Museum with a police escort, the report said.

Examinations at the museum showed the book was written in Aramaic, the language thought to be spoken by Jesus Christ, using Syriac lettering. The only remaining speakers of Aramaic live in a village near Damascus.

If not captured by the police, the copy of the Bible could have been sold at a price as high as 40 million Turkish Liras, the report said.

The Bible is now under the care of the Ethnography Museum.

A Bible that is currently being kept in a museum in Ankara and is thought to be 1,500 years old includes a drawing of the Last Supper, media reports said on Friday.

On Thursday Culture and Tourism Minister Ertuğrul Günay confirmed reports that a 1,500-year-old Bible that was discovered by police during an anti-smuggling operation in 2000 is being kept in Ankara today.

A smuggling gang was reportedly convicted of smuggling various items seized during the operation, including the Bible, and all the artifacts were kept in a safe at an Ankara courthouse. The Bible, which was reportedly kept at the courthouse for years, was only recently handed over to the care of the Ethnography Museum of Ankara.

The 52-page Bible is written in Aramaic, the language Jesus spoke The depiction of the Last Supper shows Jesus dining with his 12 Apostles.

The handwritten Bible also includes a depiction of the crucifixion of Jesus, a symbol of the sun and a cross. There is also a depiction of a cave and a large rock in the Bible that are thought to be the grave of Jesus.

The Bible will be sent abroad for examination where carbon dating will used to determine the book’s actual age. Zülküf Yılmaz, head of the General Directorate of Museums and Cultural Assets, said the Bible was entrusted to the judiciary in 2003 and only sent to the Ethnography Museum several weeks ago. Regarding claims that the book could in fact be the Gospel of Barnabas, Yılmaz said: “I have seen such claims in the media. I hope that is the case.” The Gospel of Barnabas contradicts the canonical New Testament account of Jesus and his ministry but has strong parallels with the Islamic view of Jesus. Much of its content and themes are in line with Islamic ideas, and it includes a prediction by Jesus of the Prophet Muhammad coming to earth.

Yılmaz added that the Bible would be put on public display after restoration. 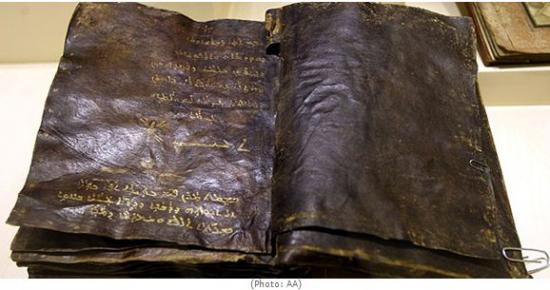