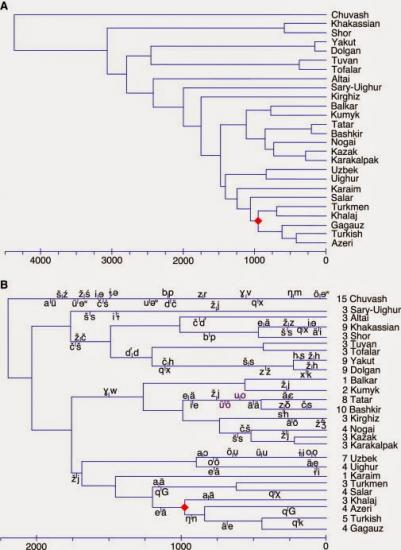 The regular-sound-change tree estimates a mean divergence time between the outgroup Chuvash and other Turkic languages of 204 BCE, with a 95% credible interval of 605 BCE to 81 CE. This compares to proposals from glottochronological analyses that suggest dates of 30 BCE to 0 CE [21] and 500 BCE to 50 CE from historical data [18, 21 and 22]. The sporadic-sound-change model estimates the mean age of the tree to be more than two millennia older (2408 BCE, 95% CI = 3994–1279 BCE), because it wrongly assumes that the many occurrences of regular sound change along the outgroup Chuvash branch are multiple instances of independent phonological change.

Concerted evolution is normally used to describe parallel changes at different sites in a genome, but it is also observed in languages where a specific phoneme changes to the same other phoneme in many words in the lexicon—a phenomenon known as regular sound change. We develop a general statistical model that can detect concerted changes in aligned sequence data and apply it to study regular sound changes in the Turkic language family.

Linguistic evolution, unlike the genetic substitutional process, is dominated by events of concerted evolutionary change. Our model identified more than 70 historical events of regular sound change that occurred throughout the evolution of the Turkic language family, while simultaneously inferring a dated phylogenetic tree. Including regular sound changes yielded an approximately 4-fold improvement in the characterization of linguistic change over a simpler model of sporadic change, improved phylogenetic inference, and returned more reliable and plausible dates for events on the phylogenies. The historical timings of the concerted changes closely follow a Poisson process model, and the sound transition networks derived from our model mirror linguistic expectations.

We demonstrate that a model with no prior knowledge of complex concerted or regular changes can nevertheless infer the historical timings and genealogical placements of events of concerted change from the signals left in contemporary data. Our model can be applied wherever discrete elements—such as genes, words, cultural trends, technologies, or morphological traits—can change in parallel within an organism or other evolving group.