If archaeologists working in southern Arizona are right in their assumptions, some adobe ruins showcased in Tumacácori National Park   may not be what the pamphlets and tour guides say they are.

Instead, less a hundred meters away may sit the actual site: the ruins of the 1751 mission of Guevavi, the last Jesuit mission built on the Santa Cruz River before the Catholic order met with native revolt and eventual expulsion. 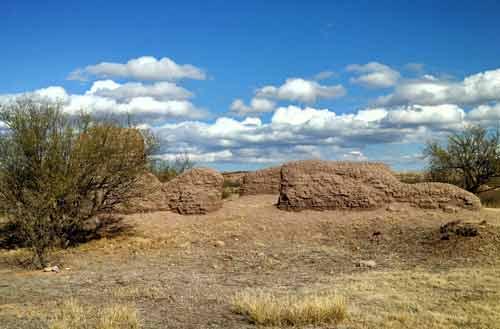 The standing adobe ruins in the southern district of Tumacácori National Historic Park are billed as the 1751 Jesuit mission of Guevavi. But current research suggests that this may be a more recent structure. (Photo by Fred Edson)

The site, discovered on property owned by the city of Nogales near the Mexican border, has already yielded ruins believed to be those of Arizona’s first Jesuit mission, built in 1701, as well as evidence of centuries’ worth of occupation by the Sobaipuri-O’odham, whose descendants are now part of the Tohono O’odham Nation.

While they stress that their research is not complete, the researchers, led by Dr. Deni Seymour of the Jornada Research Institute, say they’re “excited” that they may have identified the last Jesuit outpost in one of Arizona’s most historically important missions, a “lost mission that scholars didn’t know was lost.”

“Guevavi was a head mission at this time [in the mid-1750s], with the better-known missions of Tumacácori and San Xavier within its jurisdiction,” Seymour said.

“For years historians have suggested that the standing ruins now on National Park Service land are the remains of the Jesuit mission originally built in 1751. Yet, few Jesuit missions in this portion of the Pimería Alta [the historical range of the O'odham, formerly called the Pima] are so large.”

Historical records suggest that construction of the mission was interrupted by the Pima Revolt of 1751, which resulted in the death of more than a hundred Spaniards, the destruction of another nearby mission and the eventual establishment of a new presidio, or military fort, at Tubac.

Sixteen years after the uprising, the Spanish crown removed Jesuits from its territory for political reasons and introduced another order, the Franciscans, who went on the build the churches found today at Tumacácori and San Xavier del Bac, among many others.

Indeed, Seymour suspects that the large, standing ruins protected in Tumacácori National Park as the 1751 Guevavi mission may in fact be the remnants of a Franciscan church from this later period.

“The Franciscans … tended to build much more grandiose structures,” she said.

Although some histories of the region, including that offered by the National Park Service,  posit that the Franciscans simply took over existing Jesuit missions, Seymour says archaeological and historical evidence suggest otherwise.

“When new priests came, they tended to consecrate new altars, and often this meant building a new church,” she said.

“It is highly unlikely that the Franciscans would have used the same church as the Jesuits, as most Franciscan churches in this region are in different locations than the Jesuit ones, sometimes miles away.” 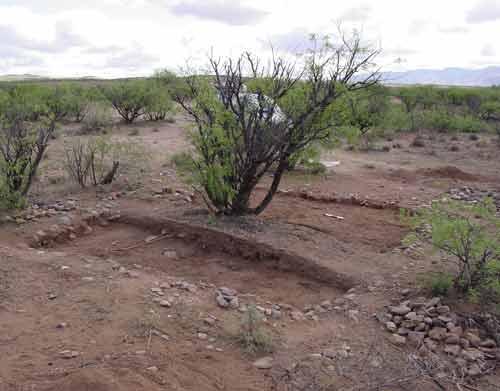 Instead, Seymour suspects that the actual 1751 Jesuit mission may sit just a hundred meters away from the first Jesuit mission at Guevavi, founded by missionary Eusebio Francisco Kino in 1701.

In 2009 Seymour published findings that she says identify the “neat little house and church” that Kino wrote of having had built at the turn of the 18th century.

Then, nearby she detected evidence of another, larger structure, built in a north-south orientation and using the same mixture of mud-brick and stone, which she suggests might also date to the Jesuit period.

“The same building technique [was used] for this structure as the 1701 building that we already excavated and dated,” she said. “None of the other adobes in the area are made with cobbles and adobe. This makes these two buildings unique from all the others.”

However, it’s unclear from documentary evidence whether the “neat little house and church,” as Kino described it, was one adobe or two discrete buildings, she noted.

“I thought for some time that this [newly investigated site] might be a second building built at Kino’s request, finished in 1701. … He may have built two buildings opposed to one.”

But with interior dimensions of some 15 by 9 meters, the newfound site may be too large to have been Kino’s chapel. 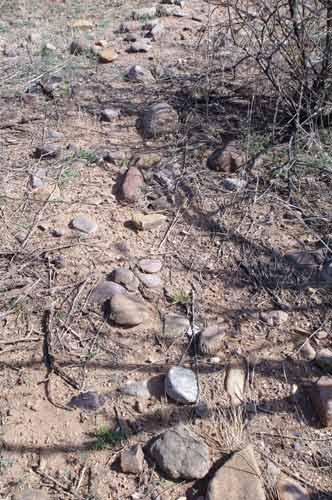 The distinctive mix of adobe and cobbles found in this rubble mound suggest it’s the site of the mission built in 1751, the foundation of the east wall pictured here. (Photo courtesy Deni Seymour)

“[G]iven its size it is likely the last Jesuit church,” she said.

“Indigenous pottery found on the rubble mound of this building is also consistent with the suggested age, and the locus lacks evidence of later pottery, as would be expected if this adobe-and-cobble structure dated to the Franciscan era or later.”

The Guevavi site as a whole also includes the traces of hundreds of native structures, along with artifacts like pottery fragments, that suggest many centuries-long occupations by the native Sobaipuri-O’odham.

Seymour said she intends to date the structure and continue excavations over the next several months, with the help of the City of Nogales and the San Xavier District of the Tohono O’odham Nation.

Seymour has undertaken a crowdfunding effort to support the research.

Next steps will include extending excavations at the site, and using luminescence dating on the ruins to determine whether they were part of the 1701 church, the 1751 mission, or something else entirely.

“The dates will reveal all we need to know to resolve this issue,” Seymour said.