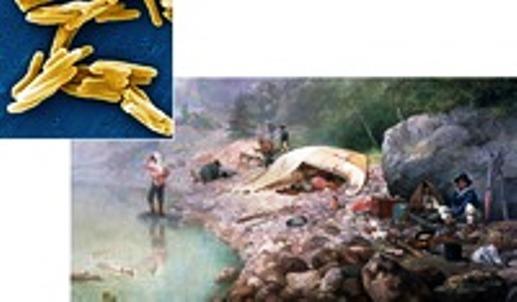 TB tenacity. French fur traders brought strains of the tuberculosis bacteria (inset) to Canada, where it spread to native populations.

Beaver hats may no longer be chic, but the tuberculosis bacterium has held on to one remnant from the 18th century Canadian fur trade: a genetic signature of how the disease spread from European immigrants to indigenous peoples. The finding may help researchers understand why tuberculosis is so difficult to eradicate.

Throughout history, tuberculosis (TB) has claimed many famous victims, including John Keats and Doc Holliday. Today, approximately one-third of the world's population harbors Mycobacterium tuberculosis, the bacterium that causes TB. Otherwise healthy people can live for decades with TB infections without becoming sick. Only when symptoms, such as a persistent, hacking cough, appear does the disease spread to others who live in close proximity with the sufferer. In 2009, TB killed an estimated 1.7 million people across the globe, according to the World Health Organization.

Infectious disease specialist Caitlin Pepperell of Stanford University in Palo Alto, California, studies TB in indigenous Canadian populations. TB strains evolve their own genetic "fingerprints" over time, but when a fellow researcher sent Pepperell a DNA profile of M. tuberculosis collected from a French Canadian population that didn't live near the native communities, she noticed that both groups harbored TB strains with very similar genetic signatures.

Pepperell and colleagues decided to analyze the genetics of TB bacteria from these Quebecers of European ancestry alongside bacteria from native populations in Ontario, Saskatchewan, and Alberta. Using mathematical modeling and statistical analysis, they traced the spread of a certain strain of tuberculosis, marked by a unique patch of missing DNA, back to a period in the 18th century. During this era, waves of French fur traders ventured into Canada and married indigenous women, bringing TB with them. The disease endured in native communities "at a low, grumbling level" for several decades, Pepperell says. Then, when hide hunters nearly exterminated the buffalo, and encroaching settlers exiled the native people to reservations, the disease exploded into large-scale epidemics in the 19th and 20th centuries.

Pepperell says the key message from the results, published today in the Proceedings of the National Academy of Sciences, is that TB can spread widely and persist at almost unnoticeable levels until stressful conditions, such as crowding or poor nutrition, weaken human hosts and give the bacteria a leg up.

Mathematical biologist Mark Tanaka of the University of New South Wales in Sydney, Australia, says the work is impressive in the way it draws on a diverse set of tools to reconstruct the history of an epidemic. "There are other examples of this kind of integration of information but not to the same degree," he says.

Roman Biek, a biologist at the University of Glasgow in the United Kingdom who studies the ecology and evolution of infectious diseases, agrees that the study paints a fascinating historical picture, but he notes that the results won't rewrite our fundamental understanding of TB disease dynamics.

Pepperell herself draws no specific TB-fighting policy prescriptions from the study. The results do, however, emphasize the tenacity of the disease, she says, by showing how it can hide, undetected, in small populations for long periods of time: "We have thrown a lot of resources at TB, but it has really hung on."