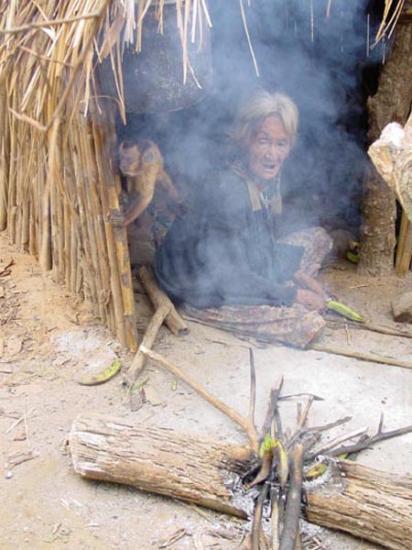 Anyone who has ever loved a grandmother or grandfather knows the nurturing role that grandparents can play. A study of indigenous people in Amazonia, who survive on food they hunt, forage or cultivate, quantifies the evolutionary benefit of that role. The results show that grandparents contribute a biologically significant amount of food calories to their extended families.
Proceedings of the Royal Society B published the results of the study of the Tsimane people of Bolivia, led by Paul Hooper, an anthropologist at Emory University.

"We quantified the net flow of calories among individuals in an environment where access to food is limited and depends on people generating it themselves," Hooper says. "The results support the theory that grandparents are key to our relatively long childhood and long lifespan, which are a big part of what makes us human. Their efforts have likely been underwriting human society for hundreds of thousands of years."

The study found that fathers and mothers contributed the most net calories to their nuclear family unit, followed by grandfathers and grandmothers, then uncles, aunts and children above the age of 12.

Relative to other primates and mammals, humans mature later and live longer, including many post-reproductive years. Evolutionary theories have proposed that intergenerational resource transfers bolster these distinctive features of human life history. This new study is the first to fully unite the production of resources over a lifetime with inclusive fitness theory, and then test the unified model in an empirical analysis.

"Our data give a clear picture of how the life history of our species is supported by high surplus food production in older age and the redistribution of that surplus to younger kin," Hooper says. "Beyond showing that food resources flowed from older to younger generations, we were able to predict how much each person gave to each other, based on their relative productivity and the closeness of their relationship."

Hooper led the research as a graduate student at the University of New Mexico and then as a post-doctoral fellow at the Santa Fe Institute. His co-authors include anthropologists Hillard Kaplan, Michael Gurven and Jeffrey Winking.

The researchers spent five years collecting data on 239 Tsimane families from eight villages. The Tsimane (pronounced Chee-mahn-AY in Spanish) live in small, isolated communities along the Maniqui River in the Amazonian rainforest that are only accessible by canoe or logging roads. These communities speak their own language, lack modern sanitation and electricity, and have access to few consumer goods beyond axes, machetes and other basic supplies.

The Tsimane clear small patches of forest to cultivate cassava, plantains, rice and corn. They also forage plants and fish and hunt meat in the form of peccary, deer, tapirs, monkeys and capybara (a large rodent). "About 95 percent of their food comes directly from their own labor," Hooper says. "It's an isolated, small-scale society that gives us an idea of the way humans lived before modern industrialization."

The study broke down average caloric intake by various age groups of the participants, ranging from about 700 calories per day for an infant to more than 3,000 calories per day for adults. They also quantified the amount of calories each family member contributed to the household, from a bushel of plantains or a kilo of rice to the meat of a butchered deer.

The value of grandmothers had been highlighted in previous studies linking them to improved outcomes for grandchildren. The contribution of grandfathers, however, has been largely overlooked, Hooper says.

While food is a limiting resource among the Tsimane, Hooper notes that in order to conduct a similar study in an industrialized society the focus should shift from food to money and time.

"Whether you're a hunter-gather or an accountant, you're good at what you do because someone supported you while you developed and learned skills," Hooper says. "The economics of learning are what makes grandparents so important to humans compared to other primates."

In modern, fast-paced societies, undergoing rapid technological change, the value of grandparents may be overlooked, he adds. "When technology moves at a fast rate, it can shift the age of competence to younger ages. We're in danger of not recognizing the wisdom of older people, accumulated over lifetimes."

Hooper, who lost his last grandparent, his maternal grandmother, a few weeks before the study was published, says she influenced his career choice. "She completed a graduate degree in biology during the 1930s, so she was way ahead of her time," he says. "I learned about Darwin and evolution from her. She taught me the importance of biology for understanding ourselves and our place in the universe."