The newly excavated ruins of the fortified residence of a ruler of the Ancient Thracian tribe Asti. Photo: Lead archaeologist Daniela Agre/Tsarevo Municipality
Altars for religious rituals dedicated to the chthonic deities, i.e. the ancient gods and spirits of the underworld, have beendiscovered by Bulgarian archaeologists during the excavations of two fortified residences of rulers of the Ancient Thracian tribe Asti inSoutheast Bulgaria.
The 2015 archaeological excavations of the twofortified homes of the Ancient Thracian paradynasts, i.e. co-rulers, from the Kingdom of the Asti (2nd-1st century BC), have now been wrapped up, Tsarevo Municipality has announced.
The Thracian rulers’ residences are located near the towns of Brodilovo and Sinemorets; both are inTsarevo Municipality, which is Bulgaria’s southeastern-most municipality, and is situated on theBlack Sea coast.
The excavations have been led by archaeologist Deyan Dichev and by archaeologist Daniela Agre from the National Institute and Museum of Archaeology of the Bulgarian Academy of Sciences.
In the fortified Thracian ruler’s residence near Sinemorets, the archaeologists have discovereda well-preserved ceramic kiln with a cult altarnext to it, which is also known with the Greek word “eschara”.
According to the researchers, the altar in question was used for rituals as part of theAncient Thracians’ prayers to the chthonic deities, i.e. the “subterranean” or underworld gods.
“These are the [gods] inhabiting the underworld or gods connected with prophesies and oracles. They are in charge offertility, wealth, sex, birth, and death. They are close to the people and they are easy to get in touch with,” thearchaeologists explain.
An identical “eschara”, i.e. altar, has been found in the Thracian ruler’s residence near the town of Brodilovo which is seen as evidence that both aristocratic homes of the Asti tribeadhered to the same religious cults.
It is noted that the buildings in both fortified residences date back to the time of the conflict between the Ancient Rome, i.e. the Roman Republic and the Pontic Kingdom (Pontus), also known as the Mithridatic Wars, after King Mithridates IV of Pontus, that played out on theBalkan Peninsula in the 2nd-1st century BC.
“[It was at this time that] in the Strandzha Mountain(in today’s Southeast Bulgaria and Northwest Turkey – editor’s note) that one of the most powerful and significantThracian kingdoms took shape – the Kingdom of the Asti, which survived until the 1st century AD, and has not been sufficiently researched yet,” the archaeologists say, as cited by Tsarevo Municipality.
Both fortified Ancient Thracian residences are located on the banks of the Veleka River, and enjoyed natural defenses.
They were also protected with massive stone walls, with the fortification near Brodilovo having afortress wall that was 2.4 meters wide. Both rulers’ homes had towers as part of defenses.
During their excavations near both Brodilovo and Sinemorets, the archaeologists have discovered a large number of luxury ceramic vessels such as amphorae and cups from the Ancient Greek polis Megara; these include both vessels that were imported from Ancient Greece, and that were locally made.

The newly excavated ruins of the fortified residence of a ruler of the Ancient Thracian tribe Asti near the town of Brodilovo, Tsarevo Municipality, in Southeast Bulgaria. Photo: Lead archaeologist Deyan Dichev/Tsarevo Municipality
In the Thracian paradynast’s home near Bulgaria’s Brodilovo, the scholars have come across a large amount of iron billets for the production of tools and weapons.
What is more, near Brodilovo, they have also stumbled upon two coin treasures (the discovery of the first coin treasure was announced in November 2015).
One of the coin treasures contains silver tetradrachms from several Ancient Greek polises on the coasts of the Mediterranean and the Black Sea: Maroneia, Odessos (today’s Bulgarian Black Sea city of Varna), and Thasos (located on the Island of Thasos) as well as coins of several rulers of theKingdom of the Thracian tribe Asti: Mostis, Sadala II the Astian, and his son Cotys II the Astian.
Together with these coins, the archaeologists also found silver bracelets and earrings.
The second coin treasure recently found near Brodilovo consists of silver tetradrachms fromOdessos, Messembria (today’s Nessebar), Athens, Maroneia, and coins of the above-mentionedThracian ruler Mostis. 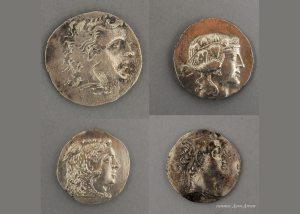 Ancient coins from the newly found coin treasures from the Thracian ruler’s residence near Bulgaria’s Brodilovo. Photo: Lead archaeologist Deyan Dichev/Tsarevo Municipality
Next to the other Thracian paradynast’s residence, the one near Sinemorets, the archaeologists have found bronze coins from the Late Hellenistic Period as well as the ruins of a single-nave churchfrom a later time.