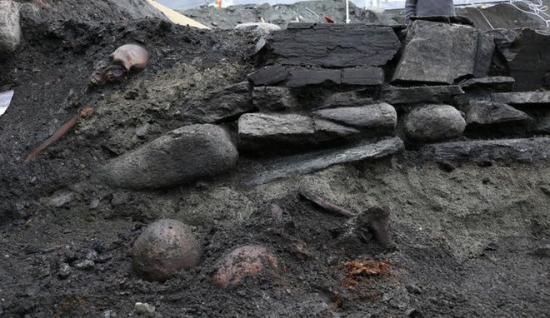 Archaeologists uncovered the foundations of a wooden church where the body of the Viking king Olaf Haraldsson may have been enshrined after he was declared a saint. Credit: Norwegian Institute for Cultural Heritage Research (NIKU)

The original shrine to a Viking-king-turned-saint has been discovered in Norway, archaeologists say.

The Norwegian Institute for Cultural Heritage Research (NIKU) announced Nov. 11 that its researchers had discovered the foundations of a wooden church where the body of King Olaf Haraldsson was taken immediately after he was declared a saint in 1031. St. Olaf, as he is now known, conquered and consolidated Norway in 1016 but held on to rule for a little more than a decade before his power was threatened by Canute I, king of Denmark and England. Olaf died in the Battle of Stiklestad in 1030.

The site is in Trondheim, where Olaf was buried after his death in battle. After locals began circulating stories about miracles credited to the dead king, his grave was opened, and his body was found to be miraculously well preserved, according to church teachings. The local bishop declared him a saint and reinterred his body in St. Clement's Church.

It's this church that NIKU archaeologists believe they have now uncovered. They found stone foundations, and even a small rectangular platform made of rock on the building's east end, believed to be the base of the church's altar. This altar may have been the High Altar of the church built over St. Olaf's new grave.

"This is a unique site in Norwegian history in terms of religion, culture and politics," excavation director Anna Petersén said in a statement. "Much of the Norwegian national identity has been established on the cult of sainthood surrounding St. Olaf, and it was here [where] it all began!" The pope would confirm St. Olaf's local canonization as a saint in 1164.

Olaf's remains were later moved to a larger church in Trondheim, upon which Nidaros Cathedral was built, according to NIKU. Begun in 1070 and completed in 1300, the ornate cathedral still stands today (though it has been badly damaged by fire several times and almost completely rebuilt and restored).

Along with foundations and an altar, the ruins believed to be the original St. Clement's Church also include a small well that may have been considered holy, Petersén and colleagues reported.

King Olaf had a winding path to sainthood. According to the Catholic Church's history, he was born around 995 and was a Viking raider as a young man. He was baptized into the Roman Catholic Church in 1013 and began his attempt to consolidate Norway in 1015, clinching his rule in 1016. In 1024, English Bishop Grimkell (who would be the first to declare Olaf a saint, in 1031) presented a religious code at Olaf's behest, establishing the Church of Norway.

However, Olaf's run in power crumbled soon after, when the then-king of England and Denmark, Canute I, resolved to reconquer Norway. Olaf was forced to flee to Russia in 1028; he returned in 1030 to try to win back the throne, but died instead. Some contemporary sources report that he was murdered or unceremoniously killed in an ambush. The Norse saga Heimskringla, which was written 200 years after the fact, tells a more valorous tale of the king leading an army into battle and dying in hand-to-hand combat, with Thorir Hund, one of the leaders of the resistance to Olaf's reign, delivering the final death blow.

A 3D model of the central excavations of the remains of St. Clement's Church in Trondheim, Norway, as seen on Oct. 18. The stones are the foundation of the church, which has long been in ruins. Credit: Kirke/church at Søndregate 18/10 by nikunorway is licensed under CC Attribution