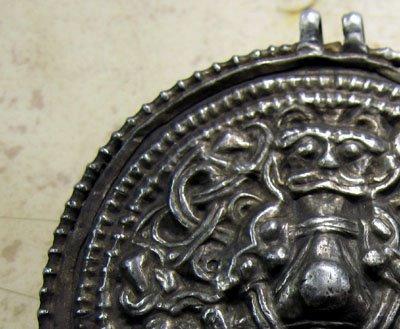 The Viking Period was a funny time, only three centuries long, leaving a huge footprint in terms of ideas and archaeology. Speakers of Scandinavian languages lived mainly in the fertile southern third of Scandinavia, most of them being subsistence farmers. The endless pine woods and ground-down mountain ranges of the north were home mainly to Saami and Finnish hunters and freshwater fishers. But along the Norwegian coast, deep-sea fishing and sea mammal hunting supported Scandinavian settlements all the way up to the edge of the Arctic ice. Here's where the warming effect of the Gulf stream is really important. And these people weren't poor or cut off from the world, even though they had to stand far more cold and dark than pretty much anyone on Earth except the hardiest Inuit. They thrived, they travelled, they held their own against the elements.

One of the more charming habits of the day was silver hoarding. Let's not get into how they got the silver. But Scandinavians at the time clearly felt that for some reason a lot of it should be hidden and left. And so, in some parts of Scandinavia, silver hoards of the 9th, 10th and 11th centuries keep popping out of the ground. On Gotland, the verdant limestone slab in the middle of the Baltic, people are so jaded about this that the local paper will simply say "this year's hoard has been found, call off the search".

In northern Norway, though, hoards are extremely rare. So it came as a surprise to everyone last August when two boys in Tromsø found one in a rock cleft under their club house.

Tromsø is unbelievably far north, a small island town with a university and a museum, both of them employing archaeologists. I was there for a few days two years ago to study brooches, and everybody was very friendly. 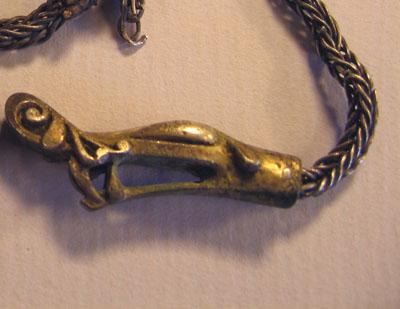 The new hoard consists of jewellery collected over generations. The round brooch is decorated in the late Borre style of the mid-10th century. The youngest piece is a pendant crucifix reliquary hung on a necklace of braided silver wire, ending in late Urnes style animal heads, the entire set dating from about AD 1100. A cool thing about the animal heads is that they are rare round-sculpture versions of the ones shown in line-drawn profile on hundreds of rune stones mainly in Uppland, Sweden. The Tromsø heads even have little pretty ears. This is Scandinavian animal art with roots way back in the Migration Period, although the Urnes style occurs almost exclusively in early Christian contexts. The crucifix reliquary is decorated in a clunky Continental Romanesque style embellished with a few Scandinavian curlicues. 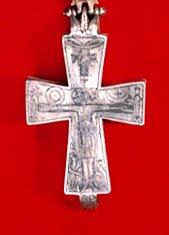 No coins were found, making it hard to nail the hoard's date down to a single decade. But a reasonable guess is that the silver was hidden in the first quarter of the 12th century AD. (This is after the Viking Period proper.) The church of Tromsø isn't historically documented before the 13th century, but the crucifix reliquary makes it highly likely that there was a Christian magnate's farm with a small wooden church on the island already around AD 1100. Unfortunately the new God proved equally unwilling as the old ones had been to improve climatic conditions in Tromsø.