Toxicologists offer possible explanation for cause of Alexander the Great's death 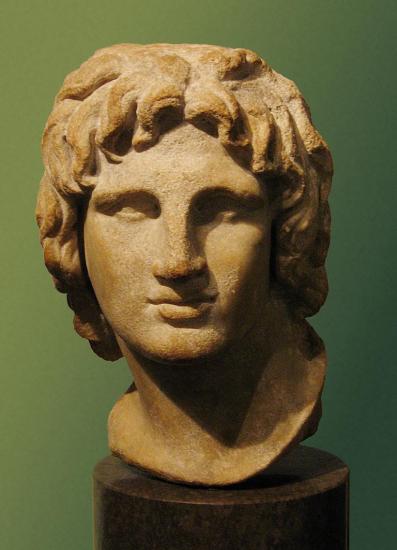 Portrait of Alexander the Great. Marble, Hellenistic artwork, 2nd-1st century BC. Said to be from Alexandria, Egypt. Credit: © Andrew Dunn/Wikipedia

Leo Schep and fellow toxicologist Pat Wheatley are suggesting in a paper they've had published in the journal Clinical Toxicology, that Alexander the Great possibly died as a result of ingesting Veratrum album, more commonly known as white hellebore—a common plant with white flowers on it. The two researchers, both from New Zealand, suggest that other common types of poisons would have killed the famous military leader very quickly—while white hellebore, on the other hand, would have killed the man very slowly.

Schep has been on the case for a decade, after being approached by a group working on a BBC documentary about the man that forged one of the largest empires in the ancient world—all before his 32th birthday. He and Wheatley note that there are differing and sometimes conflicting reports of what happened to Alexander the Great, aka Alexander III of Macedon, but most accounts agree that the man grew ill after drinking for several days, remained sick (with a lot of pain) for 12 days, and then died. Schep and Wheatley point out that common poisons of the time such as strychnine or arsenic would have killed Alexander almost right away.

White hellebore, the two researchers note, was very well known by people of Alexander's time—it was used to cause people to vomit after ingesting something that might cause harm. Given in a large enough dose, however, the plant could have proven deadly—but it would take time. Schep and Wheatley suggest it could have been caused to ferment into a type of very bitter wine, then mixed with regular wine and given to Alexander—as reports suggest he was quite drunk, he wouldn't have noticed. They note also that the symptoms of white hellebore poisoning match relatively closely with symptoms described by witnesses who wrote down what they saw—severe stomach pain, fever, nausea and vomiting.

Of course, too much time has passed, (over 2000 years) for historians or scientists such as toxicologists to prove that any one thing killed Alexandra, thus, this new theory will have to remain just that, though it might be given more credence as it appears to have more evidence backing it up than many ideas put forth by others through the years.

Abstract
Objective. To investigate the death of Alexander the Great to determine if he died from natural causes or was poisoned and, if the latter, what was the most likely poison. Methods. OVID MEDLINE (January 1950–May 2013) and ISI Web of Science (1900–May 2013) databases were searched and bibliographies of identified articles were screened for additional relevant studies. These searches identified 53 relevant citations. Classical literature associated with Alexander's death. There are two divergent accounts of Alexander's death. The first has its origins in the Royal Diary, allegedly kept in Alexander's court. The second account survives in various versions of the Alexander Romance. Nature of the terminal illness. The Royal Diary describes a gradual onset of fever, with a progressive inability to walk, leading to Alexander's death, without offering a cause of his demise. In contrast, the Romance implies that members of Alexander's inner circle conspired to poison him. The various medical hypotheses include cumulative debilitation from his previous wounds, the complications of alcohol imbibing (resulting in alcohol hepatitis, acute pancreatitis, or perforated peptic ulcer), grief, a congenital abnormality, and an unhealthy environment in Babylon possibly exacerbated by malaria, typhoid fever, or some other parasitic or viral illness. Was it poisoning? Of all the chemical and botanical poisons reviewed, we believe the alkaloids present in the various Veratrum species, notably Veratrum album, were capable of killing Alexander with comparable symptoms to those Alexander reportedly experienced over the 12 days of his illness. Veratrum poisoning is heralded by the sudden onset of epigastric and substernal pain, which may also be accompanied by nausea and vomiting, followed by bradycardia and hypotension with severe muscular weakness. Alexander suffered similar features for the duration of his illness. Conclusion. If Alexander the Great was poisoned, Veratrum album offers a more plausible cause than arsenic, strychnine, and other botanical poisons.