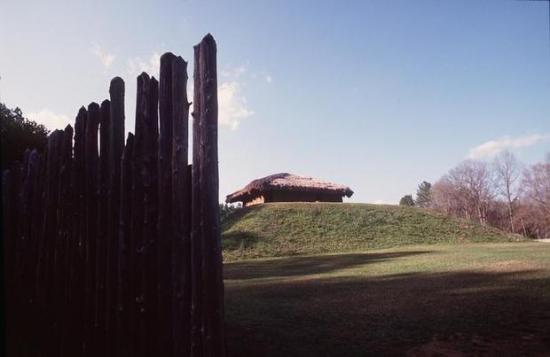 Town Creek Indian Mound site is today a grassy mound with re-created buildings and a stockade. The mound was built, one basketful of earth at a time, sometime around AD 1250 by people whose name for themselves is lost to time. WILLIAM RUSS — N.C. TOURISM

This last summer, Tony Boudreaux picked up a shovel and traveled back – way back – in time.

Boudreaux, an archaeologist who teaches at East Carolina University, along with a student team, was on a job excavating near Town Creek Indian Mound in Montgomery County.

They had just shoveled 2 feet of top soil from a series of 10 foot-by-10 foot squares – “making that dirt fly,” as Boudreaux put it.

Suddenly the soil color changed. The team members abandoned their spades, picked up masons’ trowels and got down on their hands and knees to slowly scrape away slivers of soil.

Right away, this new layer of undisturbed soil gave up its secrets: Dozens of dark, circular stains. The archaeologist and his students realized they were seeing the remains of buildings. The stained soil circles were post holes from long-gone buildings, and from disposal pits.

An ancient person’s trash is an archaeologist’s treasure. Boudreaux and his team found shards of pottery, pressed with designs. 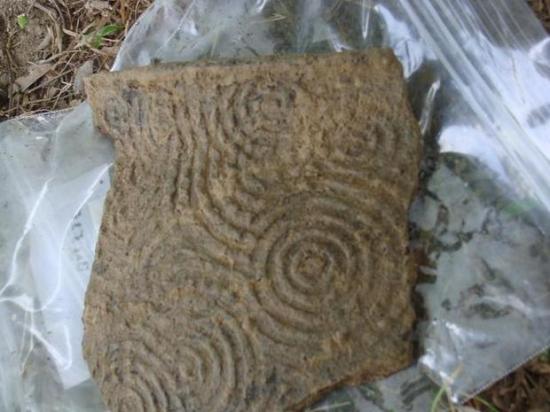 A stamped piece of pottery, probably from a large jar. Boudreaux: “FYI, archaeologists – at least non-British ones – call broken pieces of pottery ‘sherds,’ not ‘shards.’ You will gain a lot of archaeology street cred if you go with ‘sherds.’ ” COURTESY OF RICH THOMPSON

A broken stone from an ancient game called “chunkey.” Stone tools. And a tiny, blackened corncob, the remains of someone’s dinner about 800 years ago. “I was first person to lay eyes on this, along with student team, since AD 1200,” Boudreaux recalled, still marveling.

This tiny corn cob is the charred remnant of a meal eaten about 800 years ago at the Town Creek site.COURTESY OF RICH THOMPSON

Town Creek Indian Mound site – today a grassy mound with re-created buildings and a stockade, open to visitors – has been excavated countless times, revealing tools, building foundations and human remains. The mound was built, one basketful of earth at a time, sometime around AD 1250 by people whose name for themselves is lost to time. Archaeologists call them the Pee Dee, after the nearby river. Like their mound-building counterparts in other southeastern states during what’s known as the Mississippian Period, the Pee Dee operated in complex societies. But new evidence shows Town Creek isn’t the place scientists once imagined it to be.

“Early on, the interpretation of the site was strictly as a ceremonial center, inhabited by maybe two or three priests year-round,” said Rich Thompson, Town Creek site manager. “Then once a year during … a green corn celebration, people from around would be invited in. Tony’s work has shown there was just way too much activity out there for it to be a cut-off-from-the-rest-of-the-world type of place. It was difficult to break away from that early story because that’s the story it’s been for decades.”

What Boudreaux discovered is that the land at Town Creek State Historic Site has been occupied, on and off, since the Ice Age, and that for a long time, the site wasn’t a set-apart, sacred center – it was a busy, thriving community. Boudreaux’s mapping of the soil stains shows too many buildings for the site to have been mostly vacant. And items like the charred corncob show the site was full of everyday life.

“Early on, when the Mississippian community was first founded, there seemed to be a village of at least 10 houses, maybe more,” Boudreaux said. “There was no mound yet. There were public buildings in the area where the mound would be built.”

In the homes at Town Creek, when people died, they were buried in the floor of the house. But then, after the mound was constructed, something changed.

“Parts of the place appear to become a full-time graveyard,” Boudreaux said. “At least four of these houses were kind of transformed into four cemeteries.” All told, more than 500 people were buried at Town Creek.

As the area filled with the bodies of the dead, the mound appears to have become a place visited on ceremonial occasions.

“Mounds were kind of symbols in a cosmic sense,” Boudreaux said. Mounds “were associated most often with community leaders, and mounds were … like a county seat. That’s the place where the ancestors live, where the chief is on the mound performing ceremonial activities that will help keep the universe spinning.”

Remember the corncob? It turns out it was probably an example of one of the more democratic meals eaten at the site. Not all foods were considered so common.

“At Town Creek, we get some sense of the exclusionary activities that were going on at the mound,” Boudreaux said. “Buildings that were on the mound had passenger pigeon bones. You have what appears to be a special food. You’ve read accounts of these passenger pigeons … and it seems probably anybody could have gone out and gotten passenger pigeons and eaten them. But if you look at the distribution of these remains … there were social ideas about who could and couldn’t eat them.”

Understanding the way the community at Town Creek shifted from active village to a place of ceremony and status with a temple-topped mound will take time and more research, Boudreaux said. There’s much more to excavate, and the newly cleaned artifacts will need to be cataloged. Boudreaux hopes to entice an expert in ancient plant material to study the plant remains the team found. And he’ll plot out post holes using a GIS computer system to determine the locations of the long-gone buildings.

The new discoveries about Town Creek’s dynamic nature are important, and not just to better explain the mysteries of the mound, said Stephen Davis, associate director of the Research Laboratories of Archaeology at UNC Chapel Hill, which has archived most of the thousands of Town Creek artifacts.

“For North Carolina, history as it’s taught goes back to Roanoke, but the bulk of human history in North Carolina relates to Native Americans,” Davis said. The archaeological work at Town Creek, he said, is “giving a voice to a segment of the population that’s been under-represented in the narrative of our past.”

There are a few other North Carolina mounds, but Town Creek is the best-studied. And for reasons scientists don’t yet understand, the artifacts it contained are much more similar to those found in South Carolina – especially the Lowcountry – than they are to prehistoric artifacts found in the rest of North Carolina, said Stephen Davis, associate director of the Research Laboratories of Archaeology at UNC Chapel Hill.