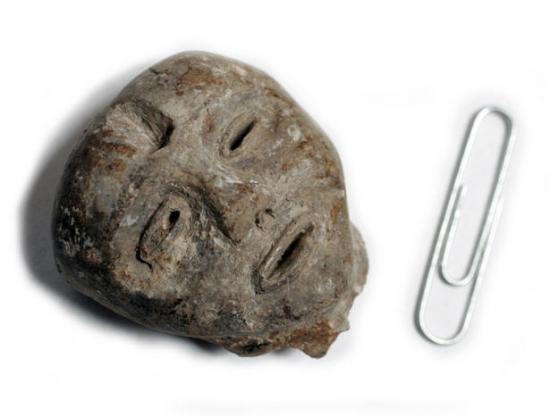 As archaeological sites go, Torontos Baby Point has little of the allure of Giza or Pompeii. But buried beneath this cluster of million-dollar homes, on a promontory overlooking the Humber River, rests a fascinating and dark story to rival any in the old world. Archeologist Ron WIlliamson has many artifacts culled from the area over the years. This is an effigy from a clay pipe, beside a paper clip for scale.

For 40 years, the Six Nations educator has been trying to teach scientists and non-natives to respect aboriginal history and beliefs. The High Park dispute is just another footnote in such work.

“Our people were everywhere. Therefore, you must expect to find their remains anywhere,'' says Hill, the coordinator of the Indigenous Knowledge Centre at Six Nations Polytechnic in Ohsweken, Ont.

“We have to pay respect to our ancestors. Hopefully, we are not desecrating their graves and not studying their remains to the point they become specimens.”

The High Park claim illuminated how much native history is underfoot in the GTA — and how little people know about a legacy that reaches back 12,000 years to the last ice age.

Even the native community squabbled over the precise location of an ancient burial site in High Park. One group called the claim by the Taiaiako'n Historical Preservation Society — that a 3,000-year-old section of the park contained human remains — a “hoax,” with science backing that position. An archeological study from 2009 found no bones or artifacts there.

Part of the problem is there is no public blueprint pinpointing legitimate native settlements or grave sites.

“Nobody will give you a map,'' says Ron Williamson, chief archeologist at Toronto-based Archeological Services Inc., who works closely with First Nations officials.

He cites two factors for the secrecy: Fear of looting and vandalism, and Ontario government rules that limits the release of sensitive information. The Ministry of Tourism and Culture determines policies and programs related to the provincial interest in conserving, protecting and promoting Ontario's heritage.

Archeologists have reported 76 combined burial sites for aboriginal and Euro-Canadian remains within the GTA to the Ministry of Tourism and Culture. That includes graves, cemeteries, ossuaries and burial grounds. The exact breakdown between native and non-native sites is unknown, although Williamson said 20 ossuaries (repositories of bones of the dead) have been discovered in the GTA. He said trophy hunters from the 19th century and on emptied many of them. Provincial protections enacted in the 1970s and '80s helped preserve archaeological pursuits.

The ministry notes that in Ontario 80 per cent of all archeological sites are aboriginal, including villages, longhouses, hunting camps, portage areas and artifacts like pottery shards, arrow and spear points. It also says artifacts like human remains should be treated with “utmost respect and dignity.”

Lonny Bomberry, the director of the Six Nations lands and resources department in Ohsweken, says grave robbing has been a painful fact of life — and death — for generations.

“There are people out there who, when they know about an archeological site where native people once lived for long periods of time and that there will be lots of artifacts, they'll just go and dig around.

“What's happened in the past is a lot of these bones ended up in museums . . . . First Nations peoples' bones were just kept there for display. A lot of times (the bones) were eventually returned but that's the mindset that existed.”

First Nations people generally believe a person is created with two spirits. Upon death, the souls split, with one resting with the buried remains. That's why, says Hill, physical disturbance of bones is a source of deep anguish.

“One spirit goes back to the sky world where we believe The Creator lives, the other — the one that gives you your personality — tends to linger in a comfortable place,'' the 60-year-old explains.

“We have ceremonies by which that spirit finds its resting place. But when their remains are unearthed, it's like calling (the spirit) back from a deep sleep. Then something has to be done to make that right again.”

Hill says “our connection to the soil is profound” and unmolested graves are necessary for strong spiritual bonds to remain intact over generations.

“Think of it as a recycling that goes on from the earth to beyond the sky and back to the earth and through women, so when a child is born, their spirit has a long, long, long, long life in the universe — and (the cycle) will continue after they are gone too.

“That creates a stability across time.”

There was not much dignity or stability when the Moatfield ossuary was accidentally uncovered in 1997 near Leslie and the 401. During the expansion of a soccer field, the bones of about 90 people were found when a fence post was driven into the very centre of the ossuary.

“The problem is work often goes ahead without any thought to the history of the place,'' says Williamson, who co-wrote Bones of the Ancestors: The Archaeology and Osteobiography of the Moatfield Ossuary.

“So this fence post gets placed, the First Nations come out, they look at this and this term was used: ‘This pierced the souls of the people here.' ”

The elders decided to relocate the ossuary rather than keep it under a busy park. Williamson was part of the crew that moved each bone individually to a secret location in the general area of the original grave site.

“You'll just have to take my word for it — they'll never be disturbed again,” the archeologist says.

Every year, after the snow melts and the land warms, more evidence of prehistoric aboriginal life is found. Hill ponders his ancestral connection to the land and wonders if the dead, by being uncovered, are trying to warn the living about a lost connection to nature.

“What we realize every summer, every time there's construction, the remains of aboriginal people come to the surface and you might want to say, metaphorically, maybe they are trying to tell us something.

“Maybe it's a reminder of who was here first, who lived well on this land for 30,000 years and who now is looking to say ‘If we continue the way we're going, nobody's going to be able to live well on this land.'

“Where there used to cornfields, there are subdivisions with no gardens. To me, it's kind of prophetic.”