A comb carved from moose antler found in the grave of a Seneca woman buried at Baby Point around 1680.  (ASI)

10. Baby Point, around 1670 to 1690: A Seneca village called Teiaiagon existed here, surrounded by the three sisters — fields of corn, bean and squash — and fortified by the steep banks of the Humber Valley. The vantage point allowed control of the fur trade on the Humber River, which was part of the Carrying Place trail, a main trade route. The land was bought by James Baby in 1820. Archeological investigations in the 1880s yielded artifacts and many burials.

11. Ganatsekwyagon (1660s-1680s): This is a rare intact Seneca village situated near the mouth of the Rouge River within the boundaries of Rouge Valley Park that has never been fully excavated. The palisaded site was first reported in the late 19th century and archeological excavations to date have turned up glass beads, ceramic smoking pipes and European gunflints. It was listed as a National Historic Site by Parks Canada in 1991.

12. Mississauga settlement, around 1700: In the late 19th century, archeologists examining Baby Point also found remnants of a village that they believe belonged to the Mississauga, an Anishinaabe people whose descendants are the Mississauga of the New Credit First Nation. The Mississauga moved here from the north shore of Lake Huron in the 1690s, driving out the Seneca. They traded with the British and the French. Mississauga leader Tequakareigh negotiated peace with Britain after the country won control of Lake Ontario from the French. The British eventually negotiated a land deal with the Mississauga, buying up most of modern-day Toronto for some money and goods. The federal government settled a land claim with the group for $145 million in 2010.

There are dozens of sites outside the city’s borders, including: 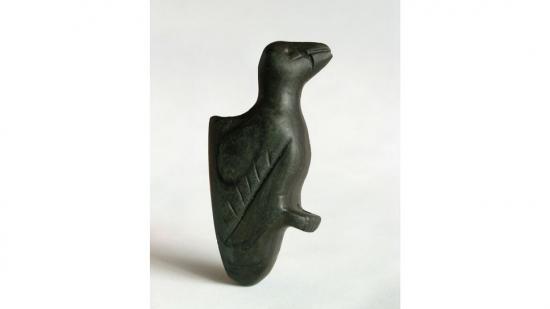 A bird pipe created from banded slate found at Seed-Barker, a 16th-century Huron-Wendat village located in the City of Vaughan on the bank of the East Humber River. The pipe had a detachable stem, through which to inhale smoke.  (TRCA)

The 16th-century ancestral Huron-Wendat village is on the east bank of the Humber River on land owned by the Toronto and Region Conservation Authority in Vaughan. Since 1983, students in a joint TRCA and York University field school have excavated the area and have found evidence of seven longhouses and 13 other structures and have retrieved about a million artifacts. But the village hasn’t been fully analyzed because artifacts found in the early and middle parts of the last century are in a number of hands, including the Canadian Museum of History, the ROM, U of T and Sustainable Archaeology, as well as the TRCA. The conservation authority is working to consolidate the known research on Seed Barker as well as retrieve artifacts from the site that they stored decades ago at the ROM.

The 16th-century ancestral Huron-Wendat community in Whitchurch-Stouffville was excavated between 2003 and 2005. The three-hectare village had multiple palisades and 95 longhouses built during different phases. About 1,800 people inhabited the village, which was surrounded in every direction by fields of corn. More than 100,000 artifacts were retrieved including 20 ceramic vessels with sculptures of mythological “corn-husk” figures, believed to contribute to fertile fields and abundant crops. Ceramic pipe bowls were shaped as woodpeckers, owls and turtles, all of which were regarded by the Wendat as “beings.” The site is now covered by housing. The artifacts are at the Canadian Museum of History.