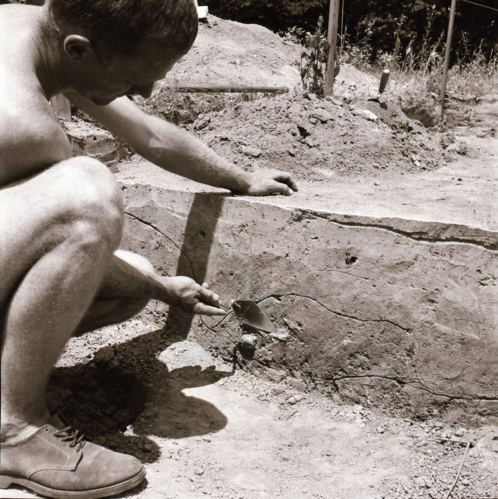 Dale Henning of Decorah, a student at the University of Iowa, points with his trowel to a depression and markings in the dirt which show that at one time, probably 1,500 years ago, this was a pit used for storage by the tribe of Indians that lived on this site. The Iowa archaeological expedition, led by Dr. R. J. Ruppe, was searching for a village site.

Thirteen deeply tanned, grimy students from Dr. R.J. Ruppe’s University of Iowa archaeology class spent the summer of 1958 at a dig in the Toolesboro area of Louisa County. They were looking for an ancient village to go with the tools, pottery shards, arrowheads and stone tools they had begun to uncover.

The town of Toolesboro, in southern Louisa County, about 12 miles east of Wapello, is on a high bluff overlooking the Iowa River where it empties into the Mississippi. It was laid out in 1837 by William L. Toole.

Toole, the first postmaster at Toolesboro when the post office was established May 27, 1837, also was the first merchant in town and was a member of the first constitutional convention.

A 10-mile area around Toolesboro was considered a prime spot to find artifacts because its proximity to the rivers made it a travel route for various tribes.

A string of nine mounds once ran northwesterly from the angle of the bluff. The last one was near the entrance to an old fort that once stood at the site of a cultivated field.

For nearly a century, Toolesboro was believed to be the site of the first meeting between Native Americans and white men when explorers Louis Joliet and Jacques Marquette landed there on June 25, 1673. The explorers wrote about a village in which they met with natives. A museum with dioramas of the event and a detailed explanation of its occurrence was erected by the private Iowa State Historical Society. Included were displays of artifacts from digs over the years.

During their eight-week class, the University of Iowa group of six girls and nine boys was housed in the old Toolesboro schoolhouse that had closed in 1920. They had electricity, but no indoor plumbing.

The daily schedule began at 6 a.m. with breakfast. The group was in the field by 7:30 a.m., broke for lunch at noon and then went back to the field until 4:30 p.m., when a swim in nearby Lake Odessa was a welcome treat. Dinner was at 6 and the rest of the evening was free for study or recreation. Each student took a turn at helping in the kitchen.

Of the student diggers, few were actually studying archaeology. One was a home economics major, two were journalism majors, one was a cartoonist for the Daily Iowan and one was a photography student, who set up a darkroom to develop his pictures of the daily operations.

The site was discovered by Earl Smith, the farmer who owned the land. In the process of changing the route of a road through a field that had never before been plowed, Smith’s bulldozer unearthed a number of Indian artifacts.

The area had hosted Davenport Academy of Sciences expeditions in 1875 and 1886. Those groups dug through several Indian mounds, uncovering skeletons, tribal ornaments and other items, but nothing that would give diggers the date when the tribe lived there. The artifacts were curated by the academy’s successor, the Putnam Museum.

Of the 18 mounds recorded there in the 1800s, only nine survived into the 20th century. The rest were dug into or plowed over.

Dr. Ruppe’s group hoped to establish whether the Indian mounds and the village they were looking for were from the same period and if the mounds and the village were connected. One source of information for the archaeologists was missing from the site. The sought-after village would have been so close to the bluff, villagers could toss their garbage instead of burying it. That lessened the archaeological field considerably.

On rainy days, lectures from Dr. Ruppe took the place of digging. On weekends, when students were allowed to leave, few did. Instead, friends would come to the site to spend the night. Air mattresses provided extra sleeping space and the guests were charged 45 cents for meals. The students later worked in the laboratory on the artifacts they found.

The items uncovered at the UI site were dated earlier than the mounds, which as part of the Hopewell Indian culture were estimated to be from 200 BC to 400 AD. Although the dig turned up a lot of material, a village wasn’t one of the discoveries. 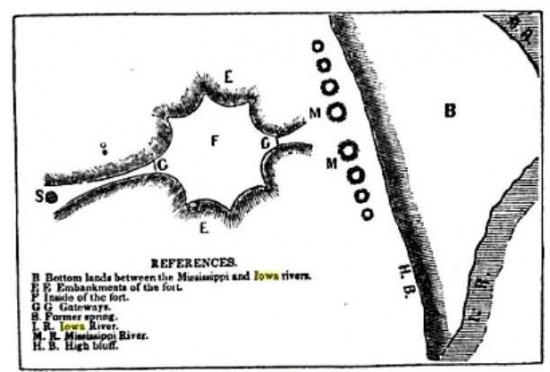 Map of the Toolesboro-area fort is from the “History of Louisa County” published in 1912.

In 2000, new archaeological evidence near St. Francisville, Mo., showed that the claim about Joliet and Marquette was probably wrong. After years of finding arrowheads, trade beads, pottery shards and other artifacts, a crucial piece of evidence was discovered under about six feet of river silt. A Jesuit ring dated to before 1700 pointed to Clarke County in Missouri as the spot where the Frenchmen landed. Joliet and Marquette were educated in Jesuit seminaries.