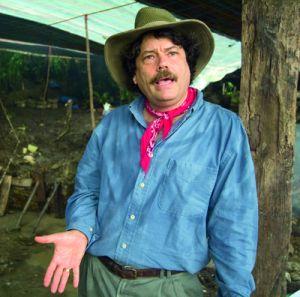 Flamboyant and controversial, Arthur Demarest is one of the world’s foremost authorities of the Maya and has helped reshape ideas about this ancient, advanced but long-lost Central American society. Michael Bawaya reports.

Because of his ‘derring-do’, Demarest has been portrayed in the media as a modern-day Indiana Jones.  Credit: Ray Rabinowitz

ARTHUR DEMAREST’S HOTEL room is a mess. Open suitcases are on the floor and newspapers are strewn about. He paces as he talks, pausing to sip a glass of red wine. Demarest is in St Louis, Missouri, to present several papers about his recent research at the Society for American Archaeology (SAA) conference.

At the moment, however, things are not going well. “I’m having a crisis,” the 57-year-old says, washing down his blood pressure medicine with the wine – he takes the medication after suffering a cerebral haemorrhage in 1995.

The nature of the crisis is that he intended one of his papers to be eight pages, the approximate length for his 15-minute presentation, but somehow it mushroomed into 38 and, as his presentation is nearing, he’s struggling to find an expendable sentence.

This problem is characteristic: Demarest is a man of many words. He is articulate, amusing and prone to long, rambling digressions. He likes to talk, one of his employees observed.

Demarest recalls that, at the tender age of four, he declared his intention to become an archaeologist. Now the Ingram Professor of Anthropology at Vanderbilt University in Nashville, Tennessee, he is one of the world’s leading Mayanists.

One of his most highly publicised discoveries was the three-storey royal palace at Cancuén, a Maya site in the Petén rainforest in northern Guatemala where Demarest has been working since 1999.

Cancuén, which was discovered in 1905, was thought to be a small site of minor importance until Demarest began working there. “This is a totally weird Maya site,” he says. It has no other pyramids and Demarest estimates its population to have been 5,000 to 10,000. Yet its palace was roughly the size of Tikal’s – a famous and much larger, Maya city.

He subsequently discovered 130 burials and an additional 51 perfectly preserved skeletons that he believes were members of Cancuén’s royal court. One was adorned with an ostentatious necklace containing 36 jaguar canines. A forensics team concluded the people were killed by spear thrusts to the spine or blows to the head. Though the Maya were known to engage in warfare, Demarest’s discovery is remarkable.

“The Cancuén massacre was unique because it was a ritual and total mass termination of the entire site and its royal dynasty, probably in just one day,” he says.

Demarest also thinks the Cancuén massacre played a pivotal role in the Maya’s fabled collapse. “It was a strategic site for the whole Maya world,” he says. “It sat at the head of navigation of the Pasión River system, which was the superhighway of the Classic Maya world.” The river was also connected to major land trade routes. When a number of Maya cities north of Cancuén collapsed, Cancuén took control of the trade routes and became very influential.

“It’s destruction in 800 AD was a pivotal point during the collapse process, because after it occurred, the western trade routes were shut down, the region was depopulated, and both the cut off of trade and the migration of peoples had a domino effect, accelerating the fall of other Maya kingdoms,” says Demarest.

“For me, Arthur is notable for his ability to translate his meticulous gathering of archaeological data into interpretations of broad cultural significance, such as the question of the nature of the collapse of Classic Maya civilisation,” says George Stuart, a former staff archaeologist for the National Geographic Society and a noted Mayanist.

“Arthur is the most important archaeologist working in Guatemala today,” declares David Freidel, a Washington University Mayanist who also works in Guatemala. Demarest merits this distinction, according to Freidel, for his research and his collaborations with the Guatemalans to improve their living conditions.

Prior to investigating Cancuén, Demarest directed a large archaeological project in the Petexbatún region in the Petén. The project was notable in several ways, one of which was its multidisciplinary character.

“Arthur brought together a remarkable array of scientists. It was this area’s most comprehensive and ambitious regional research program since the Carnegie Institution’s northern lowland program based out of Chichen Itza in the first half of the 20th century,” Freidel says.

For example, Demarest studied the flora, fauna and soil to better understand the environment. “He really covered the bases in a way nobody else had,” he says.

Using a method called inductively coupled plasma mass spectrometry (ICP-MS), which measures low concentrations of metals and non-metals, Demarest is identifying microscopic particles in the soil samples and using them to determine what types of activities were taking place there.

He’s already found a number of workshops where large amounts of jade and pyrite were being shaped and then exported to craftsmen in other cities to be fashioned into finished goods. This production suggests that there was an emerging merchant group at Cancuén. Exportation of these goods, rather than producing finished goods for Cancuén’s royalty, also suggests changes in their political-economic system.

Some of the other technologies in Demarest’s investigation of Cancuén include DNA analysis, instrumental neutron activation analysis and laser ablation. “My digs are more technological than anybody’s,” Demarest says – this from a man who refuses to write using a computer, or even a typewriter, and boasts of his personal “technological primitiveness”.

Looking at the evidence, Demarest concluded around 15 years ago that the Petexbatún region collapsed primarily due to warfare. Before that, most archaeologists believed that drought and over population were the main culprits, says Freidel.

While the Petexbatún project made valuable contributions to Maya archaeology, it also had grave consequences. The project employed about 300 local people and much of the excavation took place on federal land. When the project ended, Demarest devised an economic development plan for the region that was implemented by the Guatemalan government, but with outside labour. Having lost their jobs, the desperate locals plundered the sites for their valuable artefacts.

“From that, I learned a lot of lessons,” Demarest says. “Archaeology transforms a region,” and that transformation can be for good or ill. Since that time he’s been determined to make it for the good. He’s now a practitioner of what he calls “ethical archaeology”, which he defines as “using the archaeology and the publicity it generates to help the impoverished people near the sites.”